Review Iraq And Syria 1941, The Politics and Strategy of the Second World War 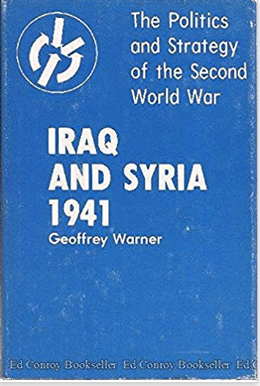 When people think of World War II in the Middle East they inevitably refer to the German General Irwin Rommel versus the British in North Africa. Few know that Iraq and Syria were involved in the conflict as well. That began with Hitler’s moves to seize Yugoslavia, Greece, Crete and the arrival of the Afrika Corps to Libya which led London to believe that Hitler was planning on seizing Egypt and the oil fields in Iraq and Iran. Baghdad then reached out to the Axis for support. England wouldn’t stand for that leading to the Anglo-Iraq War and then the invasion of Syria. Geoffrey Warner in Iraq And Syria 1941 documents three sides to this conflict, the British, the Axis and the Iraqis, while neglecting Syria a bit.


Warner starts off by laying out the strategic situation for the British at the end of 1940. After the fall of France, the Middle East was the main battlefield for England’s struggle against the Axis. London wanted to deny the oil of Iraq and Iran to Germany, which was that country’s Achilles heel. In the west, the British were based in Egypt. To the east England held Palestine, had a treaty with Iraq, and ran the oil fields in Iran. To the north Syria was under the control of Vichy France, but the British were trying to swing it to their side. To London, the main threat was the Germans and Italians attacking from Libya into Egypt and then another assault from Turkey or straight into Syria. This pincer movement would aim to seize the Suez Canal and then the oil fields. Warner does a good job explaining the immediate situation in this early war period, but could have gone into more depth. The Middle East was important to Britain for three reasons, and Warner only captures one of them. That was it was the only front London was facing Berlin and Rome. Another was that the Middle East was a major source for England’s petroleum. It wasn’t just about denying this resource to Hitler, but was a necessity for maintaining the war effort. Third, England wanted to assure its route to India the crown jewel in its empire was secure, and the main sea, land and air routes all went through the Middle East.

In 1941, London believed its worst nightmare was coming true, which led it to invade Iraq and Syria. That year Germany attacked Yugoslavia and Greece, landed paratroopers in Crete, sent the Afrika Corps to Libya, and a new Iraqi government began talks with the Axis. Prime Minister Winston Churchill was worried that Baghdad would invite German troops in, and therefore wanted Prime Minister Rashid Ali al-Gaylani removed by force. He ordered Indian troops to Iraq and later into Syria. Warner points out that Hitler was more interested in invading the Soviet Union, and thought the Middle East was a sideshow. To Churchill however, it seemed like the Axis was coming from all sides. He demanded action and that led to Iraq and Syria being invaded. This is one of the book’s strong points. Today Iraq and Syria are hardly even mentioned in any histories of World War II. In 1941 however, this was a major issue because if those two countries fell to Germany it would threaten England’s entire position in the region. It’s forces were already spread thin and it could not stand idle and take an Axis move on its flank.

The book does another good job covering the Iraqi position on the war. The country’s politicians and military were split on which side to back. Nuri al-Said was one of Iraq’s leading politicians for decades and he along with the Regent Amir Abd al-Illah were both pro-British. They wanted the country to declare war on the Axis and in return gain concessions on Palestine and Syria from London. A group of pan-Arab officers known as the Golden Square and Rashid Ali al-Gaylani who was prime minister twice during this period resented England’s hegemony over the country and wanted to side with the Axis. They too were concerned with Palestine and Syria and wanted London to declare the independence of both. That’s ironic because both factions wanted the same thing, but disagreed about how to achieve it. That came to a head in 1941 when the Golden Square led a coup and put Gaylani in office. Warner highlights that the military and prime minister completely miscalculated their position. They believed that the Axis were going to win the war. France had just been defeated and the British were in retreat. The Golden Square and Gaylani believed this was the perfect time to reach out to the Axis and make greater demands on the British. They hoped that if things escalated Germany would come to their aid. It did, but far too late to save them. This is another strength of the book that it is able to break down the internal political situation in Iraq rather than just focusing upon the British and Axis.

Finally, Warner dealt with the Axis who were completely opportunistic when it came to Iraq and Syria. Italy had grand ambitions hoping to replace England as the major power in the Middle East. The region was to be in Rome’s sphere of influence under an agreement with Berlin. Italy proved incompetent however, and Germany took the lead. Both countries held talks with Baghdad, but wouldn’t promise it anything other than general statements of support for Arabs. That was because they had no way to seriously influence events with the British and Vichy French presence. In 1941 however, the German Foreign Ministry said it was time to act and take advantage of Arab resentment against England and it decided to back Iraq and send it arms via Syria. They didn’t expect Iraq to go to war with Britain, but simply wanted to exploit the situation. This happened despite Hitler’s obsession with invading the Soviet Union, which would become the main struggle for Germany. Again, Warner explains the internal dynamics going on. Italy and certain elements in Germany thought the Middle East should be the prime front in the war in the west. The book argues that if the Axis had committed their forces there they could have swept the British from the field and seized the oil, which could have supplied all of the German forces. Instead, Hitler wanted to destroy communism and the Soviet Union. Still, he was willing to give Iraq a fling to see what might happen.

The next two chapters deal with the Anglo-Iraq War and the invasion of Syria; one is done well, and the other not so much. The English war with Iraq was over quickly. The Gaylani government didn’t expect the conflict, and believed that German aid would be imminent, but it was too little too late. Berlin and Rome only sent a few planes that arrived when the war was almost over, plus arms from Syria that were never used. Things were over in a month and the Golden Square officers and Gaylani fled the country. Churchill then decided to move into Syria again fearing that the Axis was trying to establish a foothold there. While the Anglo-Iraq War has plenty of details, the chapter on Syria is almost all on the arguments between London and the Free French that wanted to take the lead to preserve Syria as a French mandate. The reader has no idea how the campaign went. It seemed like on this topic, Warner was only interested in the politics surrounding Syria rather than the military side.

Iraq and Syria 1941 does a good job on the British, Iraqi and Axis perspectives and the Anglo-Iraq War, but drops the ball on Syria. It lays the background with a description of where the war was in the west in 1940-41, and then how the main actors perceived things. The main fault with the book is that it largely neglects the invasion of Syria. Even with that shortcomings its strengths outweigh its faults. If one wants to find out about this largely forgotten front in World War II, Iraq and Syria 1941 would be a good source.