After a large drop in violence at the end of 2018 attacks have slowly tracked upwards in the new year. That being said, there were roughly the same number of attacks and casualties from January to February 2019. 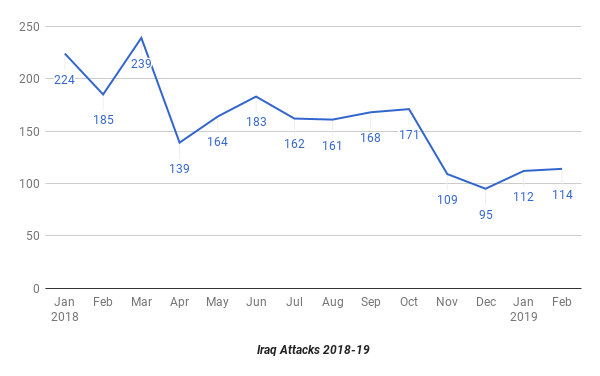 There were 118 security incidents in February 2019. Minus mass graves being found and rockets set up by a pro-Iran Hashd group targeting U.S. forces in Anbar there were 114 attacks likely perpetrated by the Islamic State during the month. That was around the same as the 112 in January. Anbar with 28, Diyala with 26 and Ninewa with 20 had the most incidents in February.

There were 380 casualties during the month, up from 267 the month before. Minus the old bodies found the numbers were nearly the same with 108 violent deaths and 128 wounded in January versus 115 violent deaths and 130 injured in February. Salahaddin with 73 casualties and Anbar with 72 led the country. Ninewa had 178 but most of those were due to several mass graves that were discovered. 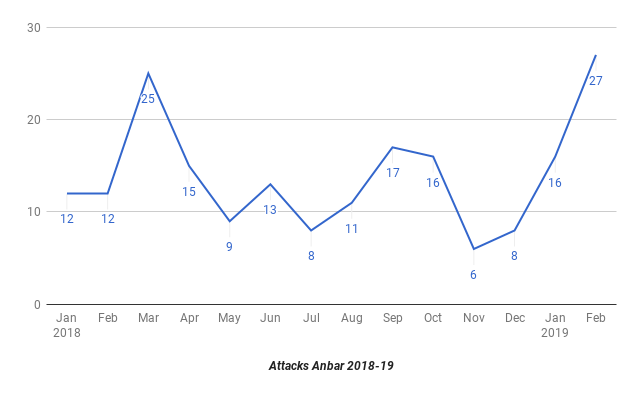 Anbar saw a large jump in attacks. Like the rest of the country violence went down in the winter with 16 in October dropping to 6 in November and 8 in December. In comparison, in 2019 there were 16 attacks in January and 27 in February. This might be the result of Islamic State fighters flowing into the province from Syria where the group is about to lose the last bit of territory it controls in the region. During the month a sheikh was attacked, a checkpoint was fired upon, a village was hit by mortars, and there were four gun battles with insurgents. The boldest operations were four separate kidnappings where over a dozen members of the Iraqi forces and civilians were seized. Some of them have turned up dead already. 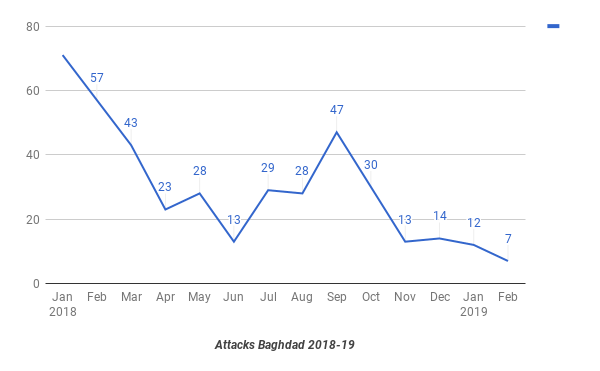 Baghdad continues to be a forgotten front by the militants. It was once the major target of terrorism, but as IS rebuilds it has removed most of its assets from there. As a result there were 13 incidents in November, 14 in December, 12 in January and just 7 in February. All seven were shootings in the outer towns and villages of the province. 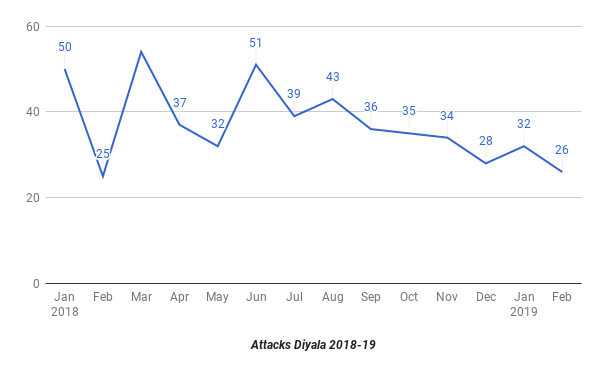 Attacks have remained relatively constant in Diyala. There were 26 in February, 32 in January, 28 in December, 34 in November, 35 in October, and 36 in September. While that is only roughly one incident per day, the types of attack show that the group is attempting to assert its control in the governorate. In February three towns were attacked, there were four mortar incidents, 5 gun battles with the Iraqi forces and 7 checkpoints were assaulted. IS has access to all the rural parts of Diyala. It has especially been hitting the Khanaqin district in the northeast. The federal forces took control of that area after the 2017 Kurdish independence referendum, but doesn’t have enough forces to hold it, and those there lack coordination offering plenty of opportunities for the militants to exploit. When the security forces launch a sweep through one area they simply relocate to another and return later on. 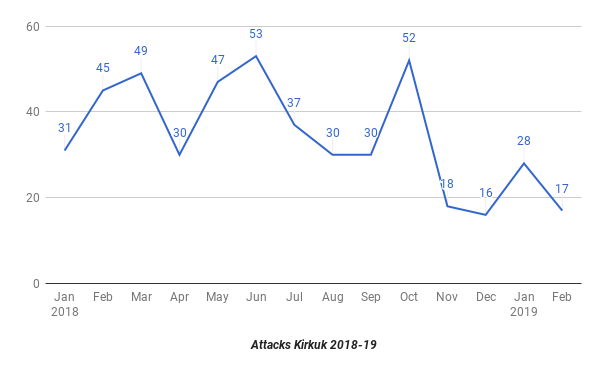 Attacks went down again in Kirkuk. There was a huge drop during the winter from 52 in October to just 18 in November and 16 in December. In January that went up to 28, but then back down to 17 in February. That included a town being attacked, 2 kidnappings, and 3 gun battles. Almost all of these occur in the north and south, with a few in Kirkuk city. 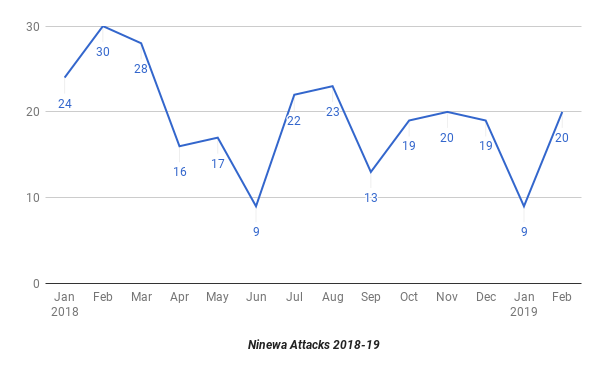 Ninewa was another province where IS activity went up. There were only 9 attacks in January. In comparison there were 20 in February. That included an assault on a town, a car bomb in Mosul, 2 gun battles, and 2 checkpoints were shot at. Most of these happened to the west and south of Mosul. Another 11 suicide bombers were killed and a suicide car bomber was arrested in four separate incidents showing a dramatic increases in attempts at mass casualty bombings not seen in any other province during the month. Like Anbar, the governorate might have received an influx of fighters from Syria recently accounting for the jump in attacks. 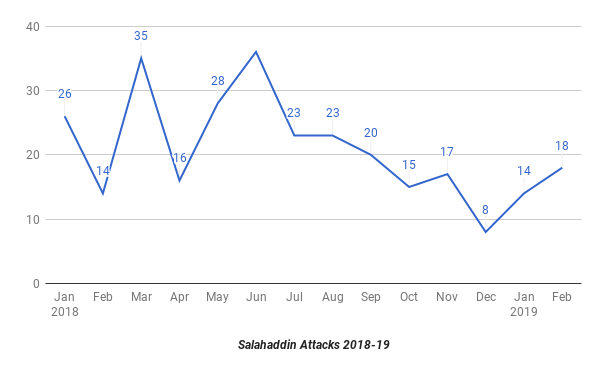 Salahaddin was the third area that saw attacks going up. There were 8 in December, 14 in January and 18 in February. As a sign of an emboldened IS the group attacked the Baiji refinery and the Alas oil field in the east. Overall, suicide bombers were employed during an assault upon a town, there were 2 kidnappings, and 3 gun battles during the month.