Review Iraq 1941, The Battles for Basra, Habbaniya, Fallujah and Baghdad 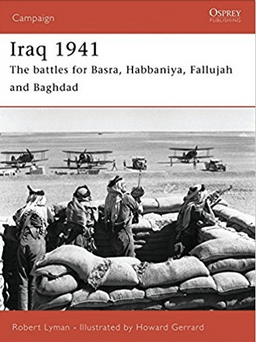 The 1941 Anglo-Iraq War is considered a small sideshow of World War II. At the time the British thought that the Germans and Italians were making a play on the Middle East via Iraq that would threaten its entire eastern empire. The Iraqi government and military thought that the war could force the British out after it had dominated the country since its creation after World War I. For Berlin, it saw a way to extend its hand in the Middle East against a greatly weakened London. Iraq and Germany didn’t believe their actions would lead to war, but it resulted in a short, but violent conflict that pitted British, Iraqi, Jordanian, German, and Indian troops against each other.


At the start of World War II Iraq was part of England’s oil concessions and was a way station between east and west. Petroleum was produced in Kirkuk and shipped to the Mediterranean, and Persian oil went through the Shatt al-Arab waterway to the Persian Gulf. There was also the Habaniya air base in western Iraq’s Anbar province, which protected those interests and was a stopping point in the trip to India. Iraq was no longer a British Mandate, but London still played a dominant role in the country’s politics, economy and military.

That caused resentment amongst young Iraqi army officers who turned to pan-Arabism as a solution to English imperialism. Four colonels came together and became known as the Golden Square and threw the military’s weight behind politicians they supported and overthrew those they opposed. In 1941, they backed Prime Minister Ali Rashid al-Gaylani who shared the Golden Square’s anti-British sentiment. Germany and Italy were also actively courting Iraqis at this time via its ambassador in Baghdad Dr. Fritz Grobba and meetings in Berlin and Ankara. London took this threat seriously and tried to remove PM Gaylani from office. That led to a coup by the Golden Square in April 1941 that put the premier back in power. Gaylani and the Golden Square read the headlines and believed that the Axis powers were going to win the war, thus offering Iraq the opportunity to escape the hegemony of Great Britain. The Axis were looking for openings in the Middle East to weaken the British. Neither actually believed that this would lead to armed conflict. Both thought the British would withdraw due to their losses in Europe and North Africa. England on the other hand saw this as a serious threat not only to its hold on the region, but one that could isolate it from India, the jewel in its crown. This set the stage for the Anglo-Iraq War.

Prime Minister Winston Churchill wanted to remove Gaylani and return a pro-British government to Baghdad. A small British force from Palestine and the Transjordan Arab Legion were sent to reinforce the Habaniya base, while the 10th Division from Indian landed in Basra under the Anglo-Iraq Treaty. Iraq responded by asking the Axis for aid and air support, and cutting off the flow of oil from Kirkuk. The Germans sent two squadrons of fighters and bombers to northern Iraq via Syria which was under control of the Vichy French as well as several trainloads full of weapons and ammunition, which ironically were never used. Even then, PM Gaylani did not want war. He demanded that the Indian forces move through Iraq for Palestine as quickly as possible, and sent troops to surround the Habaniya base hoping to pressure the British there to depart as well. The fighting started at the beginning of May when the British bombed the Iraqi forces outside Habaniya and Baghdad. The war then went through stages. The British were able to beat 9,000 Iraqi troops in Habaniya using air strikes. The British and Jordanian forces then moved east for the Battle of Fallujah towards their final destination Baghdad where they were to meet up with the Indian units moving north from Basra. Several times on this march German planes were deployed against them in air strikes. Gaylani and the Golden Square ended up fleeing. The English then moved onto Mosul and then Kirkuk, which eventually led to another campaign to free Syria of the Vichy. Everything was over in a month. Gaylani and the Golden Square failed to free Iraq of British influence, but their effort led to a war they didn’t want. Germany was not looking for a fight either, but did send military aid to an Iraqi military that didn’t seem to have a real plan, which helped lead to their defeat. England came out victorious and subdued what it thought was a serious move by Hitler that could have threatened Transjordan, Persia and ultimately India.

The Anglo-Iraq War is little known and Iraq 1941 does a good job not only breaking down the short conflict, but providing some background to what led to it. There is some great art work and some photos of the units involved as well. The book does focus upon the British forces more than the Iraqis and Germans, but it is a quick and easy read, and there is a bibliography with some good suggestions for further reading.
- April 07, 2018