Review The Struggle For Iraq, A View from the Ground Up

Review Renahan, Thomas, The Struggle For Iraq, A View from the Ground Up, Potomac Books, 2017 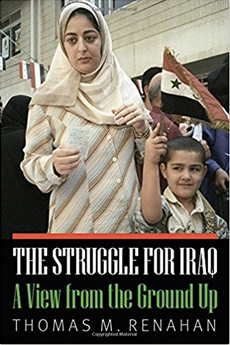 The Struggle For Iraq suffers from a lack of focus. It’s part journal of when the author Thomas Renahan worked in Iraq three separate times, first on democracy in Maysan in 2003, second working on anti-corruption and human rights in Baghdad from 2005-06, and finally as an adviser to the Kurdistan Municipality Ministry in 2007. As a result of those experiences Renahan offered plenty of suggestions for best practices and reforms which Iraq and the U.S. could follow to fix problems he encountered. It also covers what was happening in Iraq from 2003 all the way up to the war against the Islamic State. There’s also some background to major issues. Renahan goes back and forth between all of these themes throughout the book, which is the main reason why it is 481 pages of text. The best parts are the firsthand accounts of working within Iraq, but it could have really used a better editor to streamline things.


Renahan was in Iraq on three occasions, each time dealing with a different topic, and each in a different part of the country starting in the south, then the capital, and finally in northern Kurdistan. Renahan began his career in Iraq with a company contracted by the United States Agency for International Development (USAID). In December 2003, he arrived in Amara the capital of the southeastern province of Maysan. Renahan worked on several issues, but his main focus was educating the province’s population about democracy. That included surveying the public, going to schools, cities and towns and giving presentations and distributing a booklet Renahan put together on basic principles of a democratic government. There were some great successes made, but then things got derailed by the Sadrist uprising in 2004. Renahan and the other foreigners working with him were evacuated to Kuwait for safety. The business he was working for then went through downsizing and he was fired. In late 2005 Renahan was called by America’s Development Foundation to work on corruption and human rights in Baghdad as part of the Iraq Civil Society Program. He worked with Iraqi non-governmental organizations on those subjects, attempting to get them organized and connected to each other, while helping to draft legislation to try to protect their rights. He also reached out to the anti-corruption Integrity Commission. The level of graft was staggering, and despite the overwhelming consensus amongst Iraq’s population that this was a major problem there was no political will by the Iraqi leadership to seriously deal with it. Finally, in 2007 Renahan went back to Iraq once more to work with the Municipalities Ministry in the Kurdistan Regional Government. He found it to be dysfunctional as there were overlapping lines of administration and authority, which left many of Kurdistan’s towns and cities on their own. Renahan put together a huge reform package for the ministry, but little was accomplished before he headed home again. These are by far the best parts of the book. There are plenty of uplifting stories such as how well the democracy program went over in Maysan to depressing ones when several of his Iraqi staff members were assassinated for working with the Americans. If The Struggle For Iraq had just stuck to that and then provided some lessons learned at the end, it would have been a much better book.

The unfortunate side of Renahan’s story is that he tried to do too much. To just give one major example the last three chapters all read like separate conclusions. Chapter 20 “Winning the Endgame in Iraq” begins with some background on why the Islamic State was able to seize territory in Iraq in 2014, then goes into the Daesh Daily that Renahan currently works on to IS propaganda to the Iraqi campaign against the militants to protests that led Prime Minister Abadi announcing an anti-corruption/reform program to the drop in oil prices then back to the Battle for Mosul before finishing with a long section on suggestions for reconciliation and law and order in Iraq. The next chapter is all about the Kurds and how they should be dealt with. Then the final chapter is Renahan’s reflections on working in Iraq, the effort to help Iraqis who worked for the Americans to immigrate to the U.S. since so many of them are under threat, and his hopes for the future of Iraq. This all screams out for editing. If much of this was cut and consolidated The Struggle For Iraq could have been a much more readable affair.