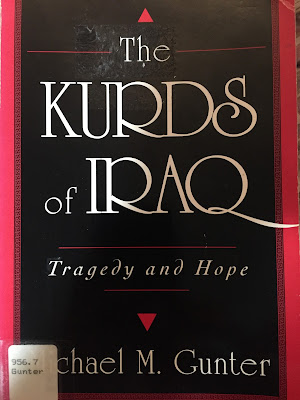 Professor Michael Gunter of Tennessee Tech University is a leading Kurdish scholar. One of his first books on the subject was Kurds of Iraq, Tragedy and Hope published in 1992. It’s a quick read with only 118 pages of text, and gives a good review of the major trials and tribulations that have faced the Kurdish movement in Iraq.


Gunter writes that the Kurds in Iraq were in a different situation then their brethren in Iran and Turkey. For one they were a larger percentage of the population, Iraq’s identity was more contested than the other two nations, and the Kurds were given the opportunity to negotiate their status. That began with British declarations after World War I that the Kurds would get their own homeland, which was then turned into autonomy when it was decided that the former Ottoman province of Mosul would be included in the new Iraq. It wasn’t until the 1930s that Kurdish politicians shifted from being tribal based to organizing around nationalism. That was when Mullah Mustafa Barzani emerged as the leading Kurdish personality.

What the book points out is that the Kurds have been beset by three main trends. First, the Iraqi government considered the Kurdish movement a threat because if they left they could take with them the Kirkuk oil fields, which were the main source of revenue before petroleum in the south was developed. That led Baghdad to constantly fluctuate between talks about autonomy to using force. Second, the Kurds have always been divided politically and regionally. During Mullah Mustafa’s heyday he had many detractors and his Kurdistan Democratic Party (KDP) would see various splits. There was also the division between the Iraqi Kurds and the Turkish Kurdistan Workers Party (PKK). The Iraqi Kurdish parties would go back and forth between alliances and opposing the PKK from the 1980s to 90s. A lot of that had to do with Turkey’s increasing influence over the KDP and the Patriotic Union of Kurdistan. That brings up the third issue, which is foreign influence which has cut both ways. Ankara, Tehran, Damascus, and Washington have all played negative and positive roles over the years. In the 1970s for example, the Nixon administration armed the Kurds to support the Shah of Iran who wanted to renegotiate a deal with Iraq over the Shatt al-Arab waterway that flows into the Persian Gulf. Barzani wrongfully believed that the Americans would guarantee that the Persians would not abandon them, but after the Shah got his deal with Baghdad that was exactly what happened and the KDP was crushed. During the Gulf War, President Bush called on the Iraqi people to overthrow Saddam, and the Kurds rose up, but the administration didn’t want the Kurds or the Shiites to overthrow the government so it let the uprisings be destroyed. The subsequent humanitarian disaster that occurred with tens of thousands of Kurds fleeing to Turkey and Iran forced Bush to set up safe havens and then the northern no fly zone in Kurdistan, which led to the establishment of a de facto Kurdish government. That period also led Turkey to change course on Iraq’s Kurds and forge economic and political ties with them to shape their new regional government as well as to split them from the PKK. It’s these constant struggles internally and externally that have shaped the Kurdish movement, and led to constant hopes and frustrations. Kurds of Iraq provides one of the best summaries and analysis of this struggle in a very short package.