Parliamentary elections in Iraq are only a month away. Dr. Munqith Dagher recently presented polling data on voting patterns at the Center for Strategic and International Studies. The results showed a divided electorate that is becoming increasingly unhappy with the ruling parties, but the lack of alternatives means those same groups will still hold onto power.

The first question was whether respondents would vote. 55% said they would with 60% in Sunni and Kurdish areas, 51% in Shiite ones, and 48% in mixed ones. 55% would be roughly the same as most of the previous elections. 57% voted in January 2005 for an interim parliament, but that included a Sunni boycott. That shot up to 76% in December for a permanent government, then dropped to 62% in 2010 (1) and again in 2014. 60% said they wouldn’t vote because they didn’t see any point to it, 28% believed candidates only thought of themselves, and 5.6% said that the results were already known. Those findings were the same across mixed, Sunni, Shiite and Kurdish areas.

Do you intend to vote?

Reasons for not voting

When asked what was most important factor in choosing a candidate or party 32% picked integrity, 18% because they would find jobs, and 11% said they would defend the rights of citizens.

What is the most important factor when choosing a candidate/list to vote for?

There were two different breakdowns for predicted election results. First, were all eligible voters. Prime Minister Haidar Abadi’s Nasr list came out with 72 seats, the pro-Iran Hashd’s Fatah was at 37 seats, Moqtada al-Sadr was at 27, Vice President Nouri al-Maliki’s State of Law had 19, the Kurdistan Democratic Party (KDP) and Patriotic Union of Kurdistan (PUK) had 18, Vice President Iyad Allawi, Speaker of Parliament Salim Jabouri and Salah al-Mutlaq’s Wataniya was at 15, Nishtiman made up of Change, Barham Salah’s new party, and the Kurdistan Islamic Group had 8, Ammar Hakim’s Hikma had 5, the Kurdish New Generation had 4, Vice President Osama Nujafi and Jamal Karbuli’s Al Karar had 3, the Kurdistan Islamic Union (KIU) had 2, and the Arab Coalition had 1.

When the results were reduced to just the people who said they were certain to vote the results were basically the same. Abadi’s Nasr was still first with 78 seats, then Fatah with 37, Sadr with 29, the KDP and PUK with 21, State of Law with 19, Wataniya with 14, Nishtiman with 8, Hikma with 5, New Generation with 4, Al Karar with 2, the KIU with 2, and the Arab Coalition with 1. The only major change was the KDP and PUK pulling more seats than Maliki’s State of Law.

Dr. Munqith believed that voters were moving away from the traditional parties. When asked about their political orientations Islamic parties, which would be all of the Shiite ones and Speaker Jabouri’s Islamic Party dropped from 49%-52% from 2004 to 2014 down to 23% in 2018. Secular parties such as Allawi’s Iraqiya went from 43%-50% from 2004 to 2010 down to 28% in 2014 and then 12% in 2018. On the other hand, mixed parties were at 0% from 2004-2010, then 7% in 2014 up to 33% in 2018. Abadi’s Nasr list includes some Sunnis and even plans on running in Kurdistan this year. Sadr has also changed track with an alliance with the Iraqi Communist Party after they worked together organizing protests demanding political reform. The Fatah list may also include Sunni elements. 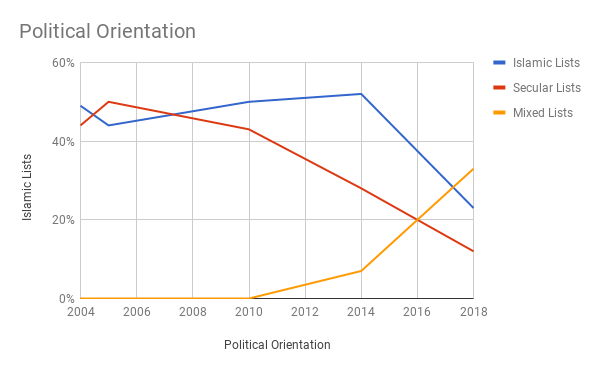 Overall, the polling showed that people were growing weary of the status quo. At the same time, if the lists receive the predicted number of seats the new government will look much like the present one. That means Prime Minister Haidar Abadi will maintain his position atop another national coalition government with the Shiite parties holding the majority of positions. Change always happens slowly in politics. That means while people may be looking for alternatives they find themselves mostly looking at the same faces to pick from this year.

Qader, Histyar, “An Unusual Idea: Iraqi PM To Campaign In Kurdistan Too, But His First Move Falls Flat,” Niqash, 3/29/18