Review The Sheriff of Ramadi, Navy SEALs and the Winning of Anbar 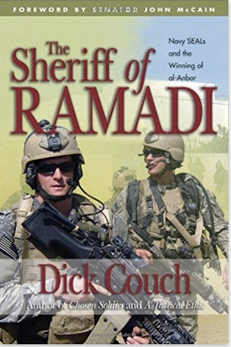 In one of Bob Woodward’s Iraq books he mentioned that the U.S. Special Forces played an important, but largely unreported role in defeating the insurgency in Iraq. The Sheriff of Ramadi, Navy SEALs and the Winning of Anbar covers the deployment of this special unit to Anbar from 2005-07 when the tide against the militants turned. Unfortunately, the author couldn’t stay focused upon that topic and got lost in the details.


The meandering style of The Sheriff of Ramadi is apparent right from the start. The Introduction goes all over the place and many of the following chapters are no better. There is a 17 page history of the SEALs starting in World War II. There is discussion of the different rotation schedules of the SEALS after 9/11 and their various deployment packages. Couch goes through how SEAL intelligence works, the dimensions of the buildings the SEALs had to build when they first set up camp in Ramadi, the kinds of sniper rifles they use, and even the exercise schedule they go through when back home at base in America. It takes roughly 60 pages just to get to the SEALS arriving in Ramadi and then some more before the battle for the city is reached.

What one can get out of the book is that by the summer of 2005 the insurgency largely had the run of Ramadi. Later that year, the U.S. forces decided to try to secure the city. The SEALs were first tasked with providing sniper fire to cover the marines and soldiers, collect intelligence, and train Iraqi scouts from the local army division. In 2006, the 1st Armored Division moved into the city after learning about counterinsurgency tactics from Tal Afar. There was a decision to either launch a large operation throughout the city like Fallujah in 2004 or try to move from neighborhood to neighborhood like Tal Afar. The latter was chosen. That started the process of denying sections of the city to the insurgents through the creation of combat outposts. It wasn’t until the tribes in the area began turning on Al Qaeda in Iraq (AQI) and police began to grow in number that the battle turned. They were locals, knew the area, and were much better at collecting information from residents than the Americans who were foreigners, and the Iraqi army who were mostly Shiites from Baghdad. The SEALs were some of the main units used to build up the new constabulary. By 2007 security in the city was completely different with AQI having largely been pushed to the surrounding countryside. This all gets outweighed by the minutia Couch goes into on everything else. If only he had an editor.