During the 1990s the U.S. suspected that Iraq had continued with its biological weapons (BW) programs after the Gulf War. In 2000, an Iraqi defector codenamed CURVEBALL told the German intelligence service that Baghdad was still working on its WMD and had built seven mobile labs to produce them. This became the basis for the Americans’ assertion that Iraq not only restarted its program, but that it was larger than before 1991.

Rafid Ahmed Alwan al-Janabi aka CURVEBALL arrived in Germany in 1999 claiming that he had intimate knowledge of Iraq’s WMD. He said that he was an engineer that worked for a company that installed equipment on seven mobile WMD labs. He went on to tell the Germans that he saw a warehouse that was a secret weapons facility, that his boss’s son worked on WMD, that Iraq was working on various biological agents, that a vaccine institute was part of the program among other stories. German intelligence attempted to verify Janabi’s claims and immediately ran into problems. It interviewed CURVEBALL’s former manager who claimed that Janabi was lying. Despite the issues with his testimony the Germans kept him on the payroll and passed his stories onto the Americans.

CURVEBALL became the main source for U.S. intelligence on Iraq’s biological program. 112 reports were written on CURVEBALL’s debriefings by the Germans. The Americans were already suspicious that Iraq had switched from using large factories to small mobile labs to escape U.N. inspectors and the west, which made them open to Janabi’s story. Like the Germans, the U.S. attempted to find corroborating evidence. Satellites identified the factory that CURVEBALL said he worked on the mobile labs at. There was nothing to show that the building had anything to do with WMD, but the fact that it existed were taken as proof for Janabi. In December 1996, a human source had provided translation of two Iraqi documents that talked about mobile labs. In 2002, an Iraqi defector provided by the Iraqi National Congress told the Americans that Iraq had built mobile labs to avoid the U.N. He initially passed a polygraph test, but was later labeled a fabricator by the Defense Intelligence Agency after four suspicious meetings with him. Despite that, his claims continued to be used. Finally, an Iraqi seeking asylum in 2001 said he saw mobile labs on trailers. His reliability was never verified however, and there were inconsistencies with his story. As a result, in 2002 CURVEBALL was the main reason why the U.S. intelligence community said that Iraq had biological weapons and the program was more advanced than before the Gulf War. His stories would later be used in a speech by President Bush as well as by Secretary of State Colin Powell at the United Nations in February 2003. 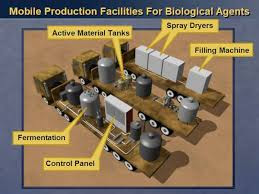 Some in the CIA questioned Janabi’s veracity. In 2000, a CIA biological weapons analyst was the only American ever to talk to CURVEBALL in Germany. He was concerned that Janabi was an alcoholic and unstable. When he went over Powell’s speech in 2003 he warned his superiors about CURVEBALL. His boss told him that it was too late to make any changes and the U.S. was going to war anyway so in the big picture Janabi didn’t matter. Tyler Drumheller the chief of the Agency’s European Division was told by the Germans in late 2002 that CURVEBALL was unreliable and possibly lying about his stories. In 2003, he received a draft of Powell’s U.N. speech and saw that CURVEBALL was being used as a major source and warned that section should be removed. Finally, an analyst at the Pentagon also had questions about whether Janabi was who he said he was and if he worked on the programs he claimed. These three voices were not enough to make any changes in the intelligence community, and the Secretary of State went on to show slides with renditions of what the mobile labs supposedly looked like based off of CURVEBALL’s testimony to the Germans.

It took several years after the 2003 invasion of Iraq for CURVEBALL to come clean. In 2008 for instance, he was interviewed by the Los Angeles Times and said he should be treated “like a king” for his role in overthrowing Saddam. He stated everything he was said was true and all the attacks upon him since 2003 were false, but then he went on to say that he never claimed Iraq had WMD. It wasn’t until 2011 that Janabi told the Guardian that in fact he made up everything he told the Germans and did so because he wanted to get rid of Saddam Hussein.

This was another example of the faulty intelligence work the U.S. did pre-2003. It wrote over 100 reports based upon debriefings it got from the Germans, yet the only time an American was able to actually meet Janabi he came away with questions about whether he was reliable. Since the intelligence agencies were already predisposed to the mobile labs theory and that Iraq had restarted its WMD programs the analysts’ concerns were dismissed. A photograph of a building with no other supporting evidence of a weapons program, an Iraqi defector later labeled a fabricator, and other problems were ignored as well. Assumptions about Baghdad’s WMD became facts for the U.S. intelligence agencies in the 2000s, and those went on to become the basis for the Bush administration’s argument for war against Iraq.

Chulov, Martin and Pidd, Helen, “Curveball: How US was duped by Iraqi fantasist looking to topple Saddam,” Guardian, 2/15/11