How Suspicious Trucks Led US To Claim Iraq Had Chemical Weapons

In October 2002, the U.S. intelligence community issued a National Intelligence Estimate (NIE) on Iraq’s weapons of mass destruction. The NIE was supposed to be the culmination of all of the intelligence the United States had on the subject. The paper assessed that Iraq had chemical weapons, had renewed production of them, and had 100-500 tons of chemical agents. All of the American agencies agreed with this section. The problem was most of that was based upon suspicious trucks at munitions dumps.


The U.S. believed that Iraq had never gotten rid all of its chemical weapons stocks from before the Gulf War. Baghdad told the U.N. weapons inspectors it destroyed its WMD after the conflict, but it could not verify all of the numbers. Based upon this, the CIA estimated that Iraq must have 100-500 tons of chemical agents hidden away. 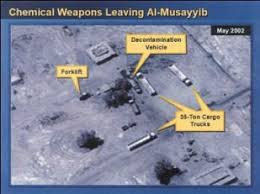 In 2002, the Americans thought they found confirmation of these claims, but it was based upon assumptions rather than hard intelligence. In that year, the U.S. took satellite pictures of a truck at a munitions dump in Musayib, Babil used by the Republican Guard. It was thought to be a decontamination vehicle, which had been used by the chemical weapons program before the Gulf War. In 1997, a U.N. team had looked at the Musayib barracks and found nothing, but that made it a suspicious site to U.S. intelligence. Not only that, but in 2002 cargo trucks were photographed coming in and out of the facility. This was thought to be the Iraqis moving WMD munitions around. Imagery also showed that the ground at the dump had been graded. This is commonly used around ammunition, but intelligence agencies thought this was done to hide chemical agents that spilled on the ground. At a second facility another suspicious truck that could be a contamination vehicle was also seen. There was some debate within the U.S. intelligence community about what these trucks exactly were. The National Imagery and Mapping Agency said the vehicle might not be involved with WMD for example. There were also no reports that Musayib or the other base had chemical weapons. Despite this, these two suspicious trucks became proof that Iraq had chemical weapons, were moving them, and had started producing them once again.

The NIE for instance stated that Iraq was producing mustard gas, sarin, GF and VX chemical agents. There were seven reports that Iraq had renewed WMD production, but analysts did not think they were reliable. Instead, they made the judgement that Iraq must be making chemical weapons because of the report that WMD munitions were being moved from the Musayib site. That of course started with the decontamination truck, which originally raised suspicion, and then the cargo trucks. How that jump was made from trucks at Musayib to Iraq was producing chemical weapons again was never explained.

The assessment that Iraq had 100-500 tons of chemical agents was not only based upon discrepancies made to the U.N. but also due to the Musayib site. Again, analysts deducted that if there were WMD munitions at Musayib and they were being moved Iraq must have a large stockpile that could be up to 500 tons. The NIE did remark that the U.S. lacked any specifics on the quantity of agents Iraq possessed. Without details then American intelligence came up with the 500 ton figure from trucks seen in satellite photos. The environment at the U.S. agencies was that Iraq was up to no good, and worst case scenarios were accepted as fact based upon the flimsiest of intelligence.

There were other elements to the NIE’s chemical weapons section such as a chlorine plant in Fallujah and Iraq trying to buy dual use equipment and chemicals that could be used in a weapons program, but when it came down to it, the suspicious trucks were the main piece of evidence. As a 2004 report by the Senate Intelligence Committee and the 2005 Robb-Silberman Presidential Commission found, U.S. intelligence agencies made huge jumps in analysis from what they were presented in reports to what they believed Iraq was doing. By 2002, most agencies assumed Iraq had restarted its WMD programs, so whatever reports came their way proved this belief. When they wrote the National Intelligence Estimate they didn’t explain that many of their claims were based upon judgements and not intelligence. This mindset meant that analysts accepted things like two trucks being decontamination vehicles, and Musayib must be moving WMD munitions even though it had never been found to be part of the program instead of realizing that they lacked any solid evidence. Their presumptions became a reality which they placed all their materials within, and dismissed that which did not fit.

Robb, Charles Silberman, Laurence, “Commission on the Intelligence Capabilities of the United States Regarding Weapons of Mass Destruction,” 3/31/05