Review America at the Crossroads, Democracy, Power, and the Neoconservative Legacy 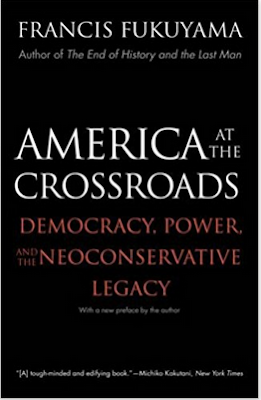 Neoconservatives were one of the main groups behind the 2003 invasion of Iraq providing much of the ideological justification for the war. The term was thrown around a lot in the media, yet few actually knew what it was about. For example, there was some talk about Leo Strauss and graduates from the University of Chicago where he taught, but what that meant in real terms or how it related to the Iraq war were largely left unexplained. That’s the reason why Francis Fukuyama’s America at the Crossroads, Democracy, Power, and the Neoconservative Legacy is important because it provides a short and concise summary and analysis of just what neoconservatism is and how it was connected to Iraq.


During the Clinton administration, neoconservatives came up with a new foreign policy agenda. This mostly consisted of ideas about regime change, unilateralism and a mistrust of international organizations, pre-emptive wars, benevolent hegemony, spreading democracy, avoiding social engineering, and American exceptionalism. Some of these thinkers later joined the Bush administration, but their role is often exaggerated. The neoconservatives within the White House were secondary players such as Deputy Defense Secretary Paul Wolfowitz. President Bush, Vice President Dick Cheney, and Defense Secretary Donald Rumsfeld on the other hand were not followers of the ideology. Their ideas however ended up playing an influential role in the administration as it tried to justify the removal of Saddam Hussein.

The Bush White House employed many of the neoconservative ideas both before and after the Iraq invasion. For instance, the September 2002 National Security Strategy included pre-emptive war. The White House argued that the connection between Iraq, terrorism and weapons of mass destruction could not be dealt with in a traditional way, especially after 9/11. That was because Saddam was not seen as a rational actor that could be deterred. Therefore a pre-emptive war was necessary to remove him from power. Fukuyama argues that American actually carried out a preventive war. Pre-emption is to stop an imminent attack, which was not the case in Iraq. Preventive is to stop a long term threat, which was what the administration thought Iraq was. The fact that none of the White House’s claims proved true after the invasion undermined the entire pre-emptive case. There were other ways in which neoconservative precepts did not work out in Iraq that Fukuyama goes through as well such as the miscalculation about the costs of rebuilding the country and turning it into a democracy, and how that became social engineering which the ideology opposed.

The book then goes through a history of where neoconservatism came from. Some in the media mentioned Leo Strauss as a father of the ideology since Paul Wolfowitz was a student of his, but Fukuyama does not think that was correct. The ideas originated in the 1930s and 40s with people like Irving Kristol, Daniel Bell, Irving Howe, and others. They were mostly leftists who turned against communism because of Stalin, and against liberals for what they believed was a soft approach towards communists. After World War II Kristol and Bell founded the Public Interest, which came out against things like President Johnson’s Great Society, which it saw as social engineering. By the 1980s neoconservatives became followers of President Reagan. Frederick Kagan and William Kristol became the main neoconservative foreign policy thinkers working at the American Enterprise Institute and the Weekly Standard respectively. They talked about American imposing a benevolent hegemony over the world, regime change, and spreading democracy. Their main argument was that the fall of the Soviet Union was due to U.S. military power, and that afterward the U.S. should use its armed forces to spread democracy to the rest of the world. They and many other neoconservatives came to focus upon Iraq as the place these ideas should be applied.

Overall, Fukuyama gives the best overview of what neoconservatism is about, where it came from, how it applied to Iraq, and the problems it led to. The book is to the point, and doesn’t get lost in any big philosophical discussions as some in the media did before and after 2003.