Iraq is currently witnessing the fewest security incidents since the overthrow of Saddam Hussein. In 2003, there were an average of 10 to 35 incidents per day. In the first three months of 2018, there has been an average of 9 incidents. After the Islamic State seized Mosul in the summer of 2014 attacks steadily declined even before the government forces went on the offensive and liberated all of the conquered territory. There were 28 incidents per day in 2014, 23 in 2015, 20 in 2017, and 15 in 2017. At the end of that last year the Islamic State decided to switch to an insurgency rather than continue to suffer high casualties in a losing cause. That was the reason why they barely put up a fight in the last clearing operations in Ninewa and Anbar. The number of incidents has been flat since October 2017 as a result. 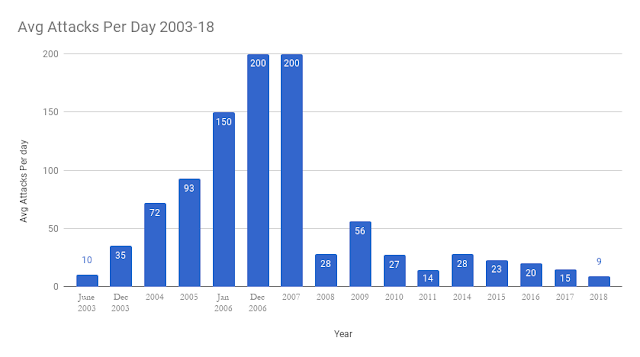 Incidents are a better means to assess security in Iraq than casualties. First, people used to focus upon the death counts in Iraq, and not include the wounded. Since there are far more injured than killed that meant thousands of incidents went unanalyzed. Second, the number of casualties was never fully reported, and after the fall of Mosul the Abadi government censored its losses meaning they became even more incomplete. Third, more and more mass graves have been found but there’s no telling when those deaths occurred which again complicates any attempt to break down fatalities month by month. Incidents, while still not perfect because there are plenty that don’t get recorded especially in rural areas, are still a better measurement. There are plenty of attacks that result in no casualties so they provide a fuller view of insurgent activity. The type and location of incidents can also be analyzed to find out where the Islamic State is most active and the level of their operations. For instance, while incidents have been stable for the last five months the type changed in March with more confrontations with the security forces and bolder attacks such as ambushes, fake checkpoints, and the targeting of rural forces and officials. These changes show that the Islamic State has gone from its scattered hit and run attacks after its decision to give up territory and is now transitioning back to a serious insurgency which is attempting to seize control of rural areas. That would have been impossible to decipher with just looking at the casualty rates.