Review Inventing Iraq: The Failure of Nation Building and a History Denied 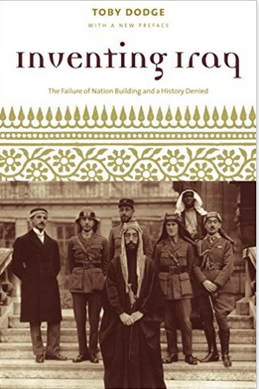 The Americans would have been well served to have read Inventing Iraq during their occupation of the country. Toby Dodge wrote the book attempting to explain the ideology largely based upon stereotypes of the Ottoman Empire and colonial territories that shaped British rule during the Mandate period from 1920-32. Those ideas mixed with budget constraints and fading interest in London combined to undermine the creation of the modern state the English wanted in Mesopotamia. The book makes some excellent observations about the troubles the British ran into, which are directly comparable to what happened to the Americans when they occupied Iraq. Unfortunately, the book is a bit inconsistent in its writing and content.


Inventing Iraq begins with an overview of how World War I changed the international system for colonial states like England. Originally, the British wanted to annex Basra for its access to the Persian Gulf and create an Arab client state in Baghdad. (Mosul province wasn’t seized until after the armistice). That was impossible after the war due to two factors. First, England was in decline and financially strapped and President Woodrow Wilson was pushing an open door and his fourteen points both of which made old school imperialism impossible. Instead, the three Ottoman provinces were turned into the Iraq Mandate which was to be run by England until Baghdad was self-sufficient. This provides some important background to the British period of Iraqi history, but there is a bit too much theory, which plagues the start of each chapter. Those sections read like a PhD thesis, and could have been consolidated into just one section instead of being repeated again and again.

The two main ideas that came to shape policy under the Mandate were an Orientalist view of Ottoman despotism and a belief in the purity of rural Iraq and its tribes. On the first point, British officials came into Mesopotamia believing that the Ottomans had been a stifling force in the region. Therefore, almost anything associated with the Turks was seen in a negative light including the new Iraqi elite, which the British were supposed to eventually give power to. This bias was often seen in official commentary on King Faisal and his officials who were demeaned for their Ottoman past. The other widely held belief was that Iraq’s urban areas had been corrupted by the Ottomans and that the rural areas especially its tribes and sheikhs were untouched and could therefore be a counterweight to the state, which many British feared could slip back into a neo-Ottoman rule. This led the British to empower sheikhs as administrators and tax collectors across the country, and ensure their place in parliament. The problems with these two stances are obvious. First, the British never really believed in King Faisal and his government because they were considered tainted for being both urban and having Ottoman origins. Second, the empowerment of sheikhs meant that the state would interact with them as middlemen instead of directly with the public as individuals in the countryside. Tribes and sheikhs are also amorphous in nature, and many of the leaders the British picked to represent them could not follow through with their jobs, especially when it came to collecting taxes. The British response was to use air power and bomb rural areas until they paid up, which caused all kinds of other issues. The mandate also turned many of them into large landowners instead of building up small individual farmers in the belief that the sheikhs could become something like an English nobility. These precepts are best described during the first two-thirds of the book.

Two other major factors shaping British policy was the homefront. England was facing severe financial constraints after World War I and constantly cut its budget as a result. That meant officials in Baghdad were always told to reduce costs. The post-war governments also lost interest in Iraq, and one administration actively campaigned upon withdrawing. That undermined the British effort in Iraq since it did not have the time or money to accomplish what it wanted, the development of a liberal state.

There are three drawbacks to Inventing Iraq. First, as already mentioned the theoretical discussions at the start of each chapter makes the book read like an academic paper. Second, the chapter on land ownership could have been folded into the parts on sheikhs because the writing gets repetitious. Last, the conclusion appears to be a total add on since it is about the early 2003 occupation of Iraq by the U.S. led Coalition. Instead of relating that time to the British, it is more of a summary of how the Americans and British started off so badly. It therefore feels very out of place with the rest of the book.

What strikes the reader most about Dodge’s book is how much the Mandate period is similar to the Coalition Provisional Authority. Both the British and Americans came into Iraq with stereotypes about the country that shaped policy for the worse. The British saw Ottomans as despots just like the Americans viewed Saddam, and therefore the old system was automatically mistrusted. Both faced financial constraints from home. Both wanted a liberal state to be created in Baghdad, but time and money meant their plans were cut short. Iraqi resistance also forced both to end their occupations sooner than expected. London and Washington put the Iraqi government on the shoulders of those they believed could maintain order, but it turned out they had very little standing in the country. Finally, both relied upon air power to make up for their lack of forces on the ground. The Americans would have learned a lot from studying this history, and could have avoided many of the mistakes that they made. Unfortunately, the U.S. largely went blind into Baghdad believing that its main job was removing Saddam, and everything else would work out, largely on its own afterward. These are the main takeaways from Inventing Iraq, and the reason why, despite its shortcomings it’s still a very good read.