Iraq’s Oil Infrastructure Expansion Plans May Run Into A Hitch

Iraq is about to embark upon a massive building and rehabilitation effort on its oil industry. The Oil Ministry wants to boost oil production from around 2.4 million barrels a day currently, to 12 million barrels in six years. In order to achieve that goal, the country must rebuild and repair it existing infrastructure, while quadrupling its pipelines and terminals at the same time. Basra will be at the center of this work as the largest petroleum fields are in the south, and the Basra port currently handles around 80% of the country’s oil exports. 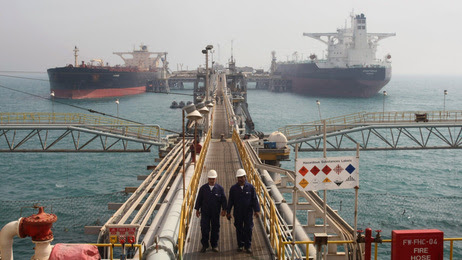 Basra Oil Terminal
Source: Agence France Presse
The oil facilities in Basra are in a sorry state. JJ Sutherland of National Public Radio recently relayed how he went to the Basra oil terminal in 2009. The engineers there said that they could not run the pipeline at full capacity because they were afraid it would burst, and they could not shut it down either for repairs because of trepidation that the underwater section would collapse under pressure from the sea. Back in October 2008, the U.S. Army Corps of Engineers and the state-run South Oil Company completed a study that found that the pipes in Basra could fail due to a lack of maintenance. (1) They estimated that it would take $5 billion to fix the problem.

In 2009 that the Oil Ministry came up with plans to expand and rehabilitate Basra’s infrastructure. First was the Iraqi Crude Oil Export Expansion project that will replace the current Basra oil terminal and pipelines, and increase capacity to 4.5 million barrels a day. Then there are plans to add four new floating terminals, three underwater pipelines, new oil and gas pipelines, reconstruct the Fao port, and rehabilitate the terminals at Khor Amaya. If completed these new facilities would boost Basra’s capacity from 1.6 million barrels a day currently to 8 million barrels. The expansion is to be completed in 15 months after work begins.

A major problem with this timeline is that oil production in southern Iraq is expected to expand dramatically very soon under the new contracts given to foreign companies in 2009 and 2010. The South Oil Company expects production to reach 1.925 million barrels a day by the first quarter of 2010, then 2.030 million by the second quarter, 2.149 million by the third, and 2.285 million barrels by the end of the year. There’s no way those numbers can be reached with the current infrastructure handling less than 1.6 million barrels, and the expansion plan not expected to be finished until early 2012. Some of this work needs to be fast tracked, but Iraq has a horrible record at doing anything major on time. That could mean an increase in bottlenecks, slow downs, and closures that already plague Basra for up to a year. That would put a major damper on the Oil Ministry’s ambitious goals to more than quadruple output.

Just one more reason the oil industry should have been privatized. Private industry is very good at building infrastructure when there's a profit motive. I fail to understand why Iraq wants to run this industry. They could tax and regulate oil companies to their hearts content, and not have a care in the world. Instead, it's one thing after another with these guys.

From what I've read Iraqis are still very nationalistic about their oil industry and weary of foreign oil companies. It took a lot for the Oil Ministry to even go through with its 2 rounds of oil auctions in 2009. Members of parliament and unions were opposed, etc. One parliamentarian even sued the Ministry over it. For those reasons the industry is probably going to stay under government control for the foreseeable future.

Who said anything about foreign oil companies Joel? I could drill a wildcat well today if I had the money and inclination to do it. And when I needed to get the oil to market, I'd reach for the yellow pages, not some government official.

Iraqi's are creative and industrious people. They don't need foreignors to develop their oil fields. They just need the opportunity to do it themselves. The government won't give them that.

I just don't think that's possible. There are no private Iraqi oil companies and if they called for them to be formed they would lack the know how, equipment, and money to be successful. If they privatized the state run companies like the South Oil Company, they to lack knowledge of modern techniques because they've been cut off for 10 years due to sanctions and wars, have problems with qualified staff, plus there's plenty of political appointees and corrupt officials that would be hard to get rid of without consequences.

Check out the movie There Will Be Blood sometime Joel. It's about the early oil days. Before drilling rigs had even been invented. They were actually pulling oil up from the ground in buckets. People can be pretty darn creative when the incentive is there.

I don't think the Iraqi government trusts its own people. Maybe they think people won't pay their fair share of taxes or something. They could easily craft laws that encouraged private production, while discouraging foreign participation. If the Iraqi government really wants to boost production, the best thing they can do is get out of the business.

I don't think it's got anything to do with Iraqi ambitions or the government not trusting the people. When the Oil Ministry was developing its plan to develop its fields there was a big push to just have the Oil Ministry do it without going to foreign companies. No one thought that was possible. The Oil Ministry lacked the money and know how to expand production. The Oil Ministry is barley holding things together as is right now.

The oil business requires billions of dollars, huge amounts of equipment, technical knowledge, etc. For example, Russia's Lukoil announced recently that they plan on investing $4.5 bil into an oil field they won in the 2009 auctions in the next 4-5 years. There's no way an Iraqi start up would be able to get that kind of money, and even the Oil Ministry if it was privatized would struggle to come up with that amount as well.

You also have to remember that Iraq is desperate for money right now, as fast as possible to rebuild, so they couldn't wait for any private Iraqi companies to develop up the funds and know how to expand production.

It's not just Iraq Joel. All the Middle East countries are control freaks when it comes to oil. US reserves are piddling when compared to Iran, Iraq, or Venezuela (another control freak). But, we produce three times as much as any of the three. Only Saudi Arabia and Russia produce more oil per day than the US, and not that much more.

Can you imagine where the US would be today if we had run our economy like Iraq does....from the top down? We'd still be a third world nation, taking bids from the Chinese to develop our oil fields.

You will get no argument from me about privatization in Iraq. Its state-run system is a wreck. I'm just trying to say that if Iraq wants to expand it's oil industry the only ones with the money, know how, and equipment are foreign companies. There are no Iraqi entities right now up to the task.

Not only that but the political situation in Iraq will not allow for the privatization of the oil sector. Pubic opinion will just not go for that at this time.