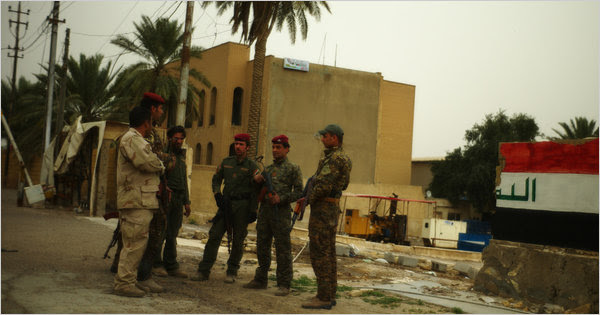 Offices of the Iraqi Nation Party in Baghdad after being closed (New York Times)
Iraq’s Prime Minister Nouri al-Maliki has turned to increasingly repressive tactics to stymie the protests occurring throughout the country. In March 2011 he shut down the offices of two political parties that had supported the on-going demonstrations. The official reasons given for the closings had nothing to do with that, but it was obviously a message by the premier that those who stood with the marchers would pay for doing so.

On March 6, Maliki ordered the security forces to move against two parties in Baghdad. The Federal Police closed the Iraqi Nation Party’s headquarters, led by former parliamentarian Mithal al-Alusi. He told the press that he was not given a reason for why the security forces shut down his office. The Baghdad Operations Command closed down the Iraqi Communist Party as well. When the security forces showed up, the Communists demanded to see the order for their actions. They returned an hour later with a letter signed by the prime minister. Not only was their office closed, but also their newspaper al-Shaab. The Prime Minister’s office claimed that the Communists were being forced out because they were using government owned property.

The Iraqi government denied any political motivations for their moves, but the Communists and Nation Party rejected that. A government spokesman for example, claimed that the Communist Party’s building was needed for the Defense Ministry. Nevertheless, both the Nation Party and Communists had come out in support of the protests, and they were quick to point that out to the media. On March 16, Mithal Alusi went as far as to call for a no confidence vote against Maliki by parliament for the closing of the Iraqi Nation Party headquarters, and trying to suppress their pro-demonstration views.

Prime Minister Maliki was caught off guard by the marches that started in February. While the premier made conciliatory statements about the right of Iraqis to take to the streets, and made many promises of reforms, he also quickly moved to put an end to them. The closing of the Iraqi Nation Party and Iraqi Communist Party offices were part of that effort. As neither has a seat in the new parliament, and are relatively minor parties, Maliki could move against them with no real political repercussions. It also showed that the prime minister was willing to sacrifice freedom of speech and pluralism to silence his critics. Maliki’s main priority is to stay in office, and these are the latest examples of him trying to achieve that end.

You state that the Communist Party's newspaper al-Shaab has been closed down. I assume that this is a consequence of Malaki closing down the office from where it was produced. If fresh facilities could be found, then am I correct in assuming that the paper would be free to come back into production? I appreciate, however, that this might be beyond the ICP's resources and that the closing of the paper's office amounts to a de-facto ban on the paper itself.

Yes, the party headquarters and newspaper offices were all in the same building. The party is still operating obviously despite getting kicked out, restarting the newspaper would be much harder since they need all the equipment as you alluded to. The Communists don't have much support in Iraq, but they are one of the oldest parties in the country and were at the heart of the nationalist struggle when the British had control over the country after World War I. It's a setback for the country and democracy to have any parties' voice being shut down.