Baghdad’s city government has initiated a major development project to build tens of thousands of housing units in the impoverished Sadr City section of the capital. It has signed a multi-million dollar contract with a foreign company, and promised up to 100,000 jobs as a result. As with almost all large schemes in Iraq, there comes the hidden cost. That comes in the form of corruption, with crooked officials taking their cut of fees and expenses. 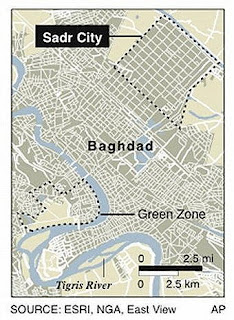 Prime Minister Nouri al-Maliki’s government has promised to redevelop Sadr City since it launched a crackdown on the Mahdi Army there in 2008. In early 2010, Baghdad’s government finally announced that it was planning on building tens of thousands of new housing units in the area. It desperately needs them since over the years residents of the district have subdivided houses, and shantytowns have sprung up built by squatters and internally displaced refugees. At the time, the mayor of Baghdad said that $10 billion had been set-aside for 150,000 units in Sadr City within 10 years. He went on to say that by the end of 2010 there would be an auction for foreign companies interested in the project. By January 2011 the local government announced that it had bids from Turkish, Iranian, and Thai companies for the work, and eventually signed four contracts with a Turkish consortium worth $11.3 billion for 75,000 units. In April, the mayor claimed that the construction would employ 75,000-100,000 Iraqis, and another 50,000 afterward in administrative offices, hospitals, a university, schools, kindergartens, stadiums, and sport and trade centers. After all the rosy statements were made, the head of the integrity committee in Iraq’s parliament warned that there was corruption in the development plan. He didn’t divulge any specifics, but he said that there was unaccounted for money, and that the committee had names of suspects.

Iraq has consistently been ranked one of the most corrupt countries in the world. It affects all levels of Iraqi society from low-level officials demanding bribes to expedite paper work to ministers stealing millions of dollars in government contracts. It can almost be expected that any large deal, such as the Sadr City development one, would include some kind of graft. No details have been given, but it could include anything from kickbacks, to buying cheap materials, to employing Iraqi sub-contractors with political connections. Just how big or small the matter is will be up to the integrity committee to investigate, and hopefully make public. Not only that, but people have to be held accountable. That has been the main problem in Iraq. Corruption cases have been exposed, but no one of any consequence has ever been sent to jail. Until that happens there will be no real deterrent against the crime.

Since 2003 insurgent violence has almost always declined in Iraq during the winter. This year is no different as Islamic State attacks have ...