In early September 2002, the Bush White House unraveled a concerted propaganda campaign to convince the American public of the threat posed by Saddam Hussein. The administration proved masterful at media manipulation, leaking a story about Iraq’s nuclear program to the press, and then quoting the story as proof of their claims. They then included the piece in an official release, which was reported on again. The news created about Iraq’s weapons of mass destruction, seemed to provide a convincing case against Saddam, when all along it was simply one administration claim repeated again and again by different outlets.
The administration unleashed its plan on September 8, 2002. It began with an article in the New York Times by Judith Miller and Michael Gordon entitled “U.S. Says Hussein Intensifies Quest For A-Bomb Parts.” The piece started with the claim that Iraq had tried to buy thousands of aluminum tubes to build centrifuges for enriching uranium for an atomic bomb. It said that U.S. intelligence had found out that Saddam had met with his nuclear scientists and praised their work, defectors claimed that acquiring a nuclear bomb was a major goal of Baghdad, and that new construction was going on at suspected sites. Administration officials told the Times that Iraq’s nuclear program was making Saddam an even greater threat, claiming that he would be more likely to use his weapons of mass destruction if he had the protection of a nuclear bomb. War supporters within the White House went on to say that they were afraid that Iraq was even further along with its program than U.S. intelligence knew about. They did not want, “The first sign of a ‘smoking gun’” to “be a mushroom cloud.” The rest of the article went on to recount Iraq’s previous attempts to build a bomb, and claims about its chemical and biological arsenal. This was the opening shot in the White House’s propaganda campaign. Although the Times report included Iraqi defectors, and other sources, the major claims about Saddam’s nuclear operations came from the administration itself. The line about a “mushroom cloud” for example, came from one of Bush’s top speechwriters Michael Gerson, and was okayed for use by the White House Iraq Group on September 5. The next phase was to hit the Sunday news talk shows, and repeat these claims again and again.
That day, Vice President Dick Cheney appeared on NBC’s Meet The Press. He claimed that Iraq had restarted both its nuclear and weapons of mass destruction programs. He said that Baghdad was buying equipment to build a nuclear bomb such as the aluminum tubes. Cheney then quoted the New York Times article as proof of his argument. He went on to say that the U.S. did not know whether Iraq had a bomb or not, but that it was an immediate threat that America could act against in self-defense. He warned that if the Bush administration did not act, the United States would become a target of any atomic device Iraq could build in the future. The genius of the White House’s program was revealed in this interview. The Vice President was able to use the government’s own leak as proof of its claims against Iraq’s nuclear ambitions.
TV appearances by Secretary of State Colin Powell and National Security Advisor Condoleezza Rice followed. Powell was interviewed on Fox News Sunday saying that Iraq’s weapons programs and stocks were growing. (1) Later that day, Rice went on CNN’s Late Edition, and said that the aluminum tubes that Iraq attempted to buy were only good for centrifuges. She warned that the United States did not know how quickly Iraq could get a bomb, and used Gerson’s phrase that Washington did not want to find out through a “mushroom cloud.” Here again, administration officials were repeating the party line on Iraq, and using the phrase devised by the White House Iraq Group. The point was to flood he Sunday talk shows with the government's argument to create a media buzz about the threat posed by Saddam. 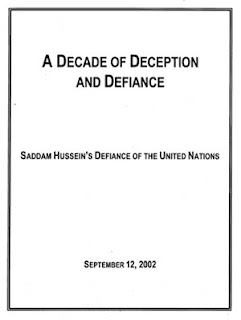 On September 12, the White House Group released a white paper on Iraq entitled, “A Decade of Deception and Defiance.” It was written by Jim Wilkerson, a deputy to White House communications chief Karen Hughes. It went over a number of Saddam’s crimes such as his human rights abuses and dictatorship, and then went through his weapons and nuclear programs. It mentioned a defector who claimed that Iraq had secret biological, chemical, and nuclear facilities. The next day, Miller and Gordon wrote about it in the Times. Along with going over a number of charges against Iraq’s WMD, it repeated many of the claims made by the Bush administration in the two reporters’ piece from September 8 such as the aluminum tubes Iraq tried to purchase, and that Saddam had recently met with his nuclear scientists. It did add that there was a debate within the U.S. intelligence community over the tubes with the Central Intelligence Agency, the National Security Agency, and the Oak Ridge nuclear facility all believing that they were for a nuclear program, while the State and Energy Departments were dissenting. With this white paper and article, the propaganda campaign had completed the circle. First, the government leaked the aluminum tubes story to the Times, then Cheney and others quoted the piece as proof of their charges against Saddam, the White House then wrote a paper partially based upon the Times article, and then the newspaper wrote about the nuclear story all over again. Suddenly, it seemed like everyone was talking about the threat Saddam would pose if he eventually acquired an atomic bomb when in fact, it was all started by one single claim the administration told to the New York Times.
President Bush topped off the campaign by addressing the United Nations on September 12. The President said that the world could not wait for Iraq to get a nuclear weapon. He warned that the international community would only know if Baghdad had a bomb when it used it. He went on to claim that the aluminum tubes were proof that Iraq was trying to enrich uranium. The rest of the speech was full of charges about how Iraq was expanding its WMD programs. Here the U.S. government was spreading its case from advocating to the American public to the world body, trying to convince it that Saddam Hussein was an imminent threat that needed to be dealt with.
The American media always tends to follow the lead of the government. Whenever Washington makes announcements it gets noted, and officials are major sources for reporters. Thus, when the Bush White House leaked the story of the aluminum tubes to the New York Times, it was immediately reported. The administration then used that coverage to claim that their argument against Iraq was supported by the news. This was then repeated again and again, in a concerted propaganda campaign to convince the American public that Saddam Hussein was an imminent threat to the country because he was attempting to acquire a nuclear bomb. The White House proved adept at manipulating the media, but in the end, it had little affect upon the public at that time. In mid-August 2002, 53% of respondents in a Gallup Poll said they favored invading Iraq, while 41% were opposed. During the campaign, the numbers went up to 57-58% for a war, but by the beginning of October they were back to 53% in favor. The tubes story proved to be an important event for the administration to make its case against Iraq, but it was not the last. It would launch more campaigns, go to the Congress for an authorization for the use of force against Iraq, present to the United Nations again, and lobby allies to join its war plans. What it showed was how many in the media played along with the government, and helped promote the war. This is something that few have acknowledged since then. In May 2004 for example, the editors at the New York Times wrote a short piece on their pre-war Iraq coverage and mentioned the aluminum tubes reporting saying that they should have been more skeptical. They wrote that the story came from U.S. intelligence sources, when in fact, the White House orchestrated it. In the end, they promised more aggressive reporting on Iraq, yet to this day it, along with the rest of the America press continues to depend upon the government as a major source for its coverage. That gives little assurance that the next time an administration decides to launch a media offensive, the U.S. press will not fully comply, and repeat the official line rather than provide a critical source for the American public to decide the merits of the government’s decisions.
FOOTNOTES
1. Mukhopadhyay, Dipali, “The Bush Administration on Iraq's Weapons of Mass Destruction Capabilities,” Carnegie Endowment for International Peace, 2004
SOURCES
Allen, Mike, “War Cabinet Argues for Iraq Attack: Bush Advisers Cite U.S. Danger,” Washington Post, 9/9/02
Dickinson, Tim, “West Wing Pipe Dream,” Mother Jones, 7/28/03
Gellman, Barton and Pincus, Walter, “Depiction of Threat Outgrew Supporting Evidence,” Washington Post, 8/10/03
Gordon, Michael and Miller, Judith, “Threats And Responses: The Iraqis; U.S. Says Hussein Intensifies Quest For A-Bomb Parts,” New York Times, 9/8/02
Isikioff, Michael and Corn, David, Hubris, The Inside Story of Spin, Scandal, and the Selling of the Iraq War, New York: Crown Publishers, 2006
Landay, Jonathan, “Iraq has been unable to get materials needed for nuclear bomb, experts say,” Knight Ridder Newspapers, 9/13/02
Miller, Judith and Gordon, Michael, “White House Lists Iraq Steps to Build Banned Weapons,” New York Times, 9/13/02
Mukhopadhyay, Dipali, “The Bush Administration on Iraq's Weapons of Mass Destruction Capabilities,” Carnegie Endowment for International Peace, 2004
New York Times Editors, “The Times and Iraq,” New York Times, 5/26/04
Risen, James, State of War; The Secret History of the CIA and the Bush Administration, New York, London, Toronto, Sydney: Free Press, 2006
Saad, Lydia, “Top Ten Findings About Public Opinion and Iraq,” Gallup News Service, 10/8/02
- October 04, 2011