In February 2010 the RAND Corporation released a report on potential threats to Iraq as the U.S. withdrew its forces. The study was entitled “Security in Iraq; A Framework for Analyzing Emerging Threats as U.S. Forces Leave.” It noted that there were still Sunni and Shiite extremists, but that they lacked the ability to re-start large scale fighting. The Arab-Kurdish dispute was considered the most troubling problem facing the country, but even then it was not considered an immediate challenge to stability. Rather, RAND found that as long as the major political parties and groups were involved in the government there was no real likelihood of a return to widespread violence in Iraq.

Insurgents in Fallujah, 2004. The turn towards armed groups for protection instead of the government was a sign of the power vacuum that existed within the country that led it to be a failed state
The first important part of the RAND study was that it documented the reasons why Iraq fell into a civil war and became a failed state. Violence in Iraq grew out of the weak political system created by the United States after the fall of Saddam. Sunnis and Shiites couldn’t agree upon the new government, which led to the former boycotting the January 2005 elections, and trying to vote down the new constitution later in that year. At the same time, the Sunni insurgency was gaining in popularity, supported by foreign jihadists who added to the chaos. The major political parties were also unwilling to give up their militias, and saw violence as the best way to gain an advantage against each other. This was a situation made worse by the fact that the Americans failed to deal with the armed factions of the parties they supported after the invasion, were focused upon withdrawing rather than defeating the insurgency before the Surge of 2007, and most importantly lacked the vision, resources, and knowledge to deal with post-war Iraq. The country was soon embroiled in a cycle of violence as Sunni attacks upon Shiites provoked retaliation that was later joined by the major Shiite parties and the Shiite-led government. The general breakdown in order led the population to look towards militants rather than the government for protection, as the authorities became just another part of the chorus of violence besetting Iraq. The political system ceased to be relevant, the nation fractured upon ethnosectarian lines, and Iraq became a failed state. This did not end until 2007-2008 due to a number of factors. First, the Sunni tribes turned on Al Qaeda in Iraq, the Surge reduced sectarian fighting, Moqtada al-Sadr called for a cease-fire, and finally the Iraqi forces went after the Mahdi Army and Iranian-backed Special Groups. 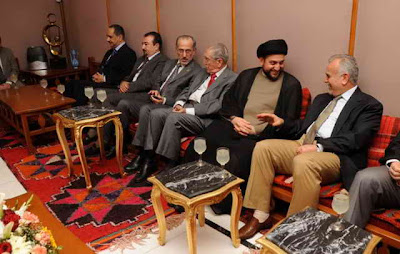 Representatives of the Sadrist-Supreme Council led Iraqi National Alliance in meeting with the Iraqi National Movement to form a new Iraqi government is a sign of the new status quo that emphasizes politics over violence. At the far right are Ammar Hakim, head of the Supreme Council, and Vice President Tariq Hashemi of the National Movement, Baghdad, May 2010
The end of the civil war in 2008 gave way to a new political order. The main factions within the country gave up on violence, and joined the political process, which became the core of the current system. The main ethnosectarian groups are the only ones that can disrupt Iraq’s stability today. Since they are working together on politics that means fighting between them is unlikely. Not only that, but RAND argues that the longer they partake in politics, the stronger the system becomes, and the more popularity it garners.

That doesn’t mean militant violence will end anytime soon, but it is less and less consequential to the future of Iraq. On the Sunni side, the insurgency and Al Qaeda in Iraq have lost the backing of the populace, and their continued use of violence has become the norm, so they wont change the situation within Iraq dramatically one way or another by their actions. Al Qaeda has also targeted the Sons of Iraq and Sunni politicians, which makes it less likely for either to rejoin the Islamists. Sunnis are also increasingly involved in politics and the security forces, so unless the government cracks down on them, they are an unlikely source of renewed conflict in general. For Shiites, the Mahdi Army is overmatched by the Iraqi forces, and Sadr is once again attempting to become a politician. The Shiites have also turned against the Special Groups, and Iran is deemphasizing its military policy in Iraq for its more important political and economic goals.

RAND believes that the continuation of the current status quo depends upon two factors. One of which is that the Shiite-led government needs to act responsibly and not abuse its power. Two signs of abuses would be that the authorities go after non-violent opponents, or that it begins sidestepping checks and balances, and the usual lines of authority. The former has not happened, but the latter has. Prime Minister Nouri al-Maliki and the Dawa party have tried to assert their control over the government bureaucracy and the security apparatus. Maliki for example, has set up an intelligence agency, a Special Forces unit, and a military brigade that answer to him directly. He has also set up military commands throughout the country that do not answer to the Interior or Defense Ministries, but rather to him personally. Other Western commentators have written about Maliki’s move towards autocratic rule before. Maliki’s concentration of power around himself has also become a worry of the other major Shiite parties, and is the main reason why they are opposing him to become prime minister once again today.

What RAND considers the main threat to Iraq’s future is the Arab-Kurd divide. If the Sunnis and Shiites were to reconcile that could increase tensions with the Kurds. Kurdistan has historically been weary of a strong central government, afraid that it will use its power against them. If they believe that Baghdad is a threat once again, they could withdraw from politics and resort to force. This dispute could blow up over a number of factors ranging from the growing strength of the Iraqi military, arguments over oil or territory, or the government’s wish to assert their authority over Kurdistan. The U.S. withdrawal will also mean that the outside guarantor of their security is disappearing. If the Kurds split from the system, it is the only real threat to break Iraq apart once again. With that being said, RAND still seems to consider it unlikely to happen anytime soon. The Kurds have followed a dual track policy since 2003 of strengthening their autonomy while participating in national politics. Both of which have been quite successful. Even though they are losing standing in Baghdad with the renewed strength of the Shiite parties, which represent the majority of the country, they are still considered an important part of any new government put together. When they lose that status, than Iraq may have to start worrying.

Overall, the RAND report thinks that the center will hold in Iraq as the U.S. withdraws its forces beginning this year. The major groups in the country are committed to politics now, and the main short-term threat to stability, Nouri al-Maliki, may not even return as prime minister. The Arab-Kurd divide is still a long-term problem that the country needs to overcome. If that comes to a head however, it will be long after U.S. combat forces have exited the country. In the end, RAND believes that Iraqis will determine their own future, and that U.S. power has already reached its apex, and is in fact declining with each day. This has caused fits for some such as outgoing commander of U.S. forces General Ray Oderino and a slew of American think tankers that want to preserve U.S. influence by keeping U.S. troops in Iraq for as long as possible. For them, Iraq is like a prodigal son that they can’t let go of. The RAND report is also a rebuff to those that constantly fret that Iraq is about to return to major fighting over a never ending list of issues that have come and passed, and others on the horizon. As the study points out, the militants lack the means, internal support, and foreign backing to change the status quo in Iraq, despite their daily acts of violence. The next large bombing will kill many and garner international headlines, but it will not change the status quo within Iraq. While Iraq’s politicians will take their time to put together a new government that doesn’t mean the country is falling apart either, because the major players are all involved in the same process now. Iraq will move ahead on its own clock from now on, and its up to the world to adjust to this new reality.

How can you say that Maliki is the main threat to stability? He is the one who has brought the stability. You prefer giving Sadr free rein again?

The RAND report is pointing out the autocratic tendencies that Maliki showed while he was in office. He has used the security forces against his political opponents in Diyala for example. I don't buy into the argument that Maliki is a strongman, but there are many that think he's heading in that direction, and that's what the report was talking about.