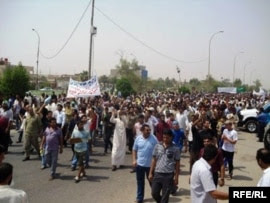 Protest against power shortages in Basra, June 2010
At the beginning of the summer in June 2010 angry Iraqis took to the streets to protest the lack of electricity. Basra, which saw clashes leading to two deaths, Dhi Qar, Anbar, Wasit, and Diyala all saw demonstrations. The causes were the extremely high temperatures this year, and an increase in the gap between power supply and demand.

Electricity output in June 2010 was the highest monthly average ever due to high domestic production and record high imports, but that wasn’t enough. All together, the national grid put out 6,721 megawatts for that month. The problem was that at the same time there was a record high demand, an estimated 10,800 megawatts. The June supply only met 62% of the public’s needs as Iraqis faced temperatures between 110-120 degrees each day. In many parts of the country people only got four hours of power per day as a result.

Overall, output in the second quarter of 2010 was down from January to March, the first time that had happened since 2004. From April to June 2010 the government produced an average of 6,202 megawatts per day. There was a 4% decrease in output from power plants. Planned maintenance, shortages of fuel and water for generators, technical issues, mechanical failures, and the weather also resulted in the loss of 1,625 megawatts of capacity.

As a result of the protests, Prime Minister Nouri Al-Maliki was forced to sack his Electricity Minister and appoint Oil Minister Hussain Shahristani as a temporary replacement. Shahristani promised to increase output, cut special power privileges for politicians, and told the security forces to crackdown on people illegally tapping into the electricity network. As ever the root of the problem is the fact that Iraqis continue to buy consumer good such as refrigerators and air conditioners, the government hardly charges users for their power consumption, and the entire system is mismanaged. While there have been no more demonstrations since June, there are anecdotal stories in the press about popular discontent still being high, and the power system is no closer to being fixed then before.