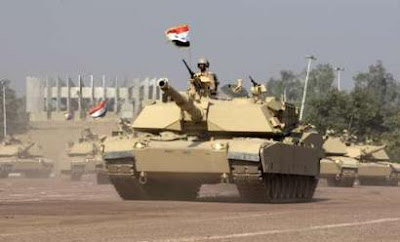 Abrams tanks recently delivered to Iraq (2Space)
In early August 2010 the first 11 M1A1 Abrams tanks from the United States arrived in Iraq. As reported before, Baghdad has ordered 140 Abrams and recovery vehicles, which are to be delivered by the end of this year. 60 Iraqi crews have been under going training on the Abrams since 2009 in anticipation. The tanks went to the Besmaya military base, southeast of Baghdad, where they will join the 9th Mechanized Division. The unit currently has refurbished Hungarian T-72 tanks, and U.S. M113 armored personnel carriers.

Hungarian T-72s of the 9th Division (Wikipedia)
In the future, Iraq might have five armored divisions and a brigade. If the government has the money it may order a total of 700 Abrams in five consignments by 2020. Those would go to equip the 3rd and 5th Divisions, as well as the 56th Brigade. The 11th and 19th Divisions may also get tanks purchased from the Ukraine as well as the 9ths T-72s.

These tanks are aimed at giving Iraq the capability to defend itself from foreign threats. Currently, Baghdad depends upon the Americans for protection as the Iraqi Army is focused upon fighting the insurgency rather than external defense. Iraq would still rely upon America and contractors however, for several more years for logistics, spare parts, and maintenance, all things that Iraqi forces are notoriously bad at.

How exactly does the KRG feel about Baghdad ordering M1s and F-16s? I mean, I know it's not the Ba'ath regime, but it's still a government in Baghdad.

The Kurds originally did protest the arms purchases but then dropped them. Don't know why. There are Kurdish division commanders and the chief of staff is a Kurd as well, so maybe they feel they have a role in the armed forces.

They can get all the weapons and machinery they want but until they have a committed, loyal army the Iraqi's won't get anywhere.

This article from the LA Times says that the Kurds have objected to the F-16 purchases.