For the fourth straight year, the U.S. State Department has reported that Iraq has a serious problem with sex trafficking and forced labor. Women and children in Iraq have been forced into prostitution. Foreign women have also been shipped to Iraq for the sex trade, and Iraqi women have been sent abroad as well as slaves. Many workers from abroad are also coming to Iraq in increasing numbers with the growing economy, and that has opened up opportunities to exploit them. Iraq has laws against both of these crimes, but barely enforces them. That’s because the government does not consider either an important issue.

Each year the State Department releases a report on trafficking around the world. It breaks countries up into four categories. The first is Tier 1, which are nations that are complying with the minimum standards of the Trafficking Victims Protection Act. Tier 2 countries are those that do not fully comply with the act, but are making efforts to do so. Tier 2 Watch List is ones that State has questions about. That’s because the number of victims is increasing, the government doesn’t provide evidence of its efforts, or has only said that it would start complying with the act the next year. Finally, Tier 3 countries do not comply with the Trafficking law at all, and are not making an effort to do so.

Most of the Middle East and North Africa did poorly in the 2012 report. Israel was the only country in the Tier 1 category. Morocco, Tunisia, Egypt, Jordan, Qatar, the United Arab Emirates, and Oman were Tier 2. Iraq and Bahrain were Tier 2 Watch List. The remaining states, Algeria, Libya, Yemen, Saudi Arabia, Iran, Kuwait, and Syria were in Tier 3. The region has historically been a trade route for goods and people between Africa, Asia and Europe, and remains so to this day.

Iraq has a growing sex trade, which is connected to neighboring countries through organized crime rings. Women are sold within the country, and also sent to Syria, Lebanon, Jordan, Kuwait, the United Arab Emirates, Turkey, Iran, Yemen, and Saudi Arabia for both prostitution and slavery. There are several ways women end up in the sex trade. One is that women are raped on film, and that is used to blackmail them. Another is women are bailed out of prison or jail, and then forced to pay off their fines. Some are pushed into prostitution by their family due to poverty, debts, or a need to settle a family dispute. The two most common ways however are forced or temporary marriages, and false job offers. In the former, women are married off under false circumstances, usually to pay off money, and then put into the sex trade. In the latter, women are told that they will be given work, but instead are forced into the illegal business. There is anecdotal evidence that the trade is increasing in Iraq. In Tikrit for example, non-government organizations found women from Baghdad, Kirkuk, and Syria being sold to traffickers for $1,000-$5,000 each. Women from Iran, China, and the Philippines have also been trafficked to and through Iraq. There are several factors contributing to the continuation and growth of the sex trade in the country. One is the high levels of poverty, which leads to desperate decisions to make money. Related to that is the huge number of Iraqi refugees who are in vulnerable situations, which opens them up to exploitation. Finally, corruption opens up government officials to bribes and collusion with gangs. Organized crime grew during the 1990s as they were used by Saddam’s government to smuggle goods to get around sanctions. After the fall of his regime, gangs grew in size, as they were either associated with or grew out of militant organizations. Today, many insurgent groups rely upon crime to finance their operations, or have given up the fight, and have become full time gangsters. They use their networks that were once used to smuggle in commercial goods or weapons, to now smuggle women and children in and out of Iraq. 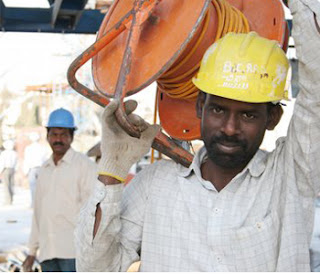 The huge influx of foreign workers like these into Iraq has opened up the opportunity for some to be exploited by labor scams (U.N. Radio)

Similarly, Iraq is a center of forced labor in the Middle East. People from Bangladesh, India, Indonesia, Nepal, the Philippines, Sri Lanka, Thailand, Pakistan, Georgia, Jordan, Ethiopia, and Uganda have all come to Iraq in recent years to find work. Some of them have become indentured workers. They are promised jobs in Iraq, but when they arrive they are threatened, get their passports and documents taken, and are told they have to pay off a debt before they can leave. Some are told that they will be going to the Gulf States or Jordan, and then end up in Iraq, or have the terms of their contract changed, and are forced to stay. Many of these people are used in construction, security, and janitorial or domestic work. In Kurdistan for example, there were women from Ethiopia, Indonesia, Nepal, and the Philippines, who were offered domestic jobs there, but were then forced into servitude. Nepal and the Philippines actually banned their citizens from going to Iraq, because of these practices. Manila just lifted this ban in March 2013. Many Arab states, especially in the Persian Gulf, have a long history of using foreign workers, and Iraq is no different. The Iraqi government, which is the largest employer in the country, offers robust pay, which leads average Iraqis to demand similar wages, much higher than in many neighboring countries. That causes local businesses to turn to cheap foreign labor instead. This is despite the fact that Iraq has a very high unemployment and underemployment rate. Unfortunately, this large wave of migrant workers is being exploited by some.

Most problematic for the State Department and the victims of sex slavery and forced labor, is the fact that the Iraqi authorities do not seem much concerned with either issue. For the last four years, Baghdad has not provided the U.S. with hard evidence that it is trying to improve the situation. It has a written plan to address sex trafficking, and passed new legislation about it in April 2012, but enforcement is weak. Officials have tried to help out some workers. In March 2012, an investigation was opened into 22 Ukrainian and Bulgarian men who were forced into working in construction, and then abandoned by their employer in the Green Zone. Each one was paid $2,000 in compensation. The Labor Ministry also paid for some awareness programs about sex trafficking, and occasionally there are stories about gang members being arrested for the crime. Otherwise, little else has been done. Many prostitutes are arrested as criminals, there are no services for victims of the sex trade or forced labor, the government is not collecting any statistics on either crime, nor trying to train law enforcement about them, and there are some officials who deny that trafficking is occurring in Iraq, or claim it is not a major issue. Iraq should have been made a Tier 3 country some time ago. It has continued to promise Washington that it will do something about trafficking in labor and sex, and has made some superficial steps towards doing that, which has kept it on the Tier 2 Watch List instead. This makes it like the many other countries in the Middle East and North Africa that have not addressed these crimes.

Iraq has a growing problem with the sex and labor trade. Sanctions and wars devastated much of Iraqi society. That created millions of poor and displaced people who are open to exploitation in the sex market. Women from other countries have also been shipped to or through Iraq by the wide range of criminal organizations that exist within Iraq and the region. Iraqi women have also been sent abroad as prostitutes. On the other hand, the decrease in violence has now allowed the economy to grow, and there is a demand for workers. Instead of using the huge pool of out of work Iraqis, many companies have instead turned to foreigners that they can pay less money to. They too are open to manipulation, because it is easy for an employer to seize their documents, and then blackmail them to work in return for the promise that they will be allowed to leave the country eventually. Corruption and the government’s lack of interest have allowed both of these practices to increase in Iraq. Until there is political will to deal with these two problems, they are likely to continue in Iraq, and flourish just like they do in the rest of the region.

When talking to my colleagues and friends there, I always found it very challenging to get anyone to admit that human trafficking or the sex trade were happening at all in Iraq. No one seems willing to admit this to themselves. Some might be willing to accept that this is the fate of many of the Filipino women who are trafficked through Iraq, but they are certainly not willing to accept that this could happen to women in Iraq.

And yet, at the same time, men still demand sex and pay for sex with sex workers...

That's the general feeling I've gotten from the reports I've read from the State Dept. Every now and then a gang will get busted for trafficking, but otherwise very little is done, because the authorities just don't seem to care.