What’s To Gain From the Kurdish Alliance’s Boycott Of Iraq’s Government?

The Kurdish Coalition is currently boycotting both the parliament and the cabinet. This came after the 2013 budget was passed without their consent at the beginning of March. Afterward Kurdistan Regional Government (KRG) President Massoud Barzani called for a conference on the matter with Kurdish politicians, and they have not gone back to work since then. The Coalition is facing two problems. The first is that the Kurdish parties are not united, and have different views on what action to take vis-à-vis Baghdad, and the second is that the Kurds lack the numbers to have a meaningful affect upon Prime Minister Nouri al-Maliki’s government. That poses the question of what can they achieve through their action.

Iraq’s 2013 budget was the most controversial since the country regained its sovereignty in 2005. On March 7, 2013, the $118.6 billion budget, the largest in Iraqi history was passed by the parliament. Usually every party votes for the document, but this year was different. The Kurds and the Maliki government got into a heated debate over compensation for international oil companies (IOCs) operating in Kurdistan. The Kurdish Coalition claimed that IOCs were due $3.5 billion in costs for their operations in the north. The budget only ended up including $650 million for them. Baghdad said that the KRG was not turning over all their oil profits to the central government, were smuggling petroleum, had not met their monthly export quotas, and were not turning over their accounts for auditing. A Kurdish delegation headed by Natural Resource Minister Ashti Hawrami travelled to Baghdad, and met with Oil Minister Abdul Karim Luaibi at the end of February to try to resolve the issue, but nothing came of it. The result was that the vote for the budget was held without the Kurdish Coalition present. The list immediately objected, saying that a consensus should have been formed before its confirmation. Usually, the national budget is something that brings together all of Iraq’s fractious political parties, because they all benefit from the money spent. This year, the argument between the central and regional governments over who has control over energy policy, led to the first majority vote on the document. Kurdistan demands that it has the right to sign its own petroleum contracts, which Baghdad calls illegal. This argument has gone on for the last several years, while at the same time there has been a series of short-term agreements that allowed the Kurds to export oil through the northern pipeline to Turkey. That recently broke down when Maliki refused to pay the companies working in the north. The KRG went ahead and signed a deal to truck petroleum and refined products to Turkey, and is working on its own independent oil pipeline to that country. To strike back, the prime minister got the 2013 budget through parliament without including the Kurdish Coalition. That led to the current boycott. 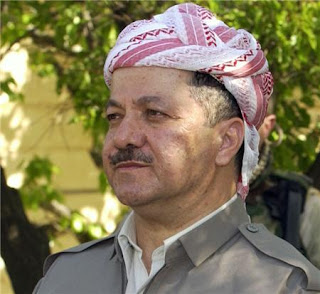 Pres. Barzani has organized a Kurdish boycott of the central government (KRG)
President Barzani organized the Kurdish boycott of the central government, but he is facing opposition. On March 9, Barzani called for all the Kurdish parliamentarians to meet with him in Irbil to discuss the 2013 budget. They issued a joint statement criticizing Maliki and his State of Law list, and called on the other Shiite parties to oppose him. Then on March 12, Kurdish ministers did not show up at a cabinet meeting. Finally, on March 18, an official boycott of the government was announced. What hasn’t been decided is what the next move will be. Barzani’s Kurdistan Democratic Party (KDP) reportedly wants to withdraw from the government. The Patriotic Union of Kurdistan (PUK) disagreed, in part because it has a much better relationship with Maliki, and it is also afraid that Barzani is attempting to monopolize power in the KRG. The opposition parties the Kurdistan Islamic Union (KIU) and the Change List have come out against the boycott of the parliament, stating that the problem is with Maliki not the legislature. They are also unwilling to completely go along with the two ruling parties the KDP and PUK, and have their concerns about Pres. Barzani as well. The problem for the Kurdish parties is that they lack the numbers in either the cabinet or parliament to have any real affect. Both can continue their business, and in fact, helps Maliki, because he doesn’t have to deal with the Kurds. For instance, the prime minister just put all the Kurdish ministers on leave, showing that he doesn’t mind the boycott at all. The Sadr movement was recently carrying out its own boycott, and has the most ministries in the government. Together the two lists could have achieved something like getting concessions from Maliki, but the Sadrists just returned to work. Finally, the Iraqi National Movement is also withholding their ministers over the on-going protests in Anbar, but that has split the party with some going back to work. That leaves the Kurdish Coalition largely powerless to achieve anything with their tactic.

President Barzani has come out as one of the leading opponents of Prime Minister Maliki, and the 2013 budget was the latest source of dispute between them. The Kurdish Coalition demanded that oil companies in Kurdistan be fully compensated for their operations, while Baghdad wanted to punish the KRG for signing its own oil contracts, and exporting oil independently. The premier ended up winning that fight. The Kurdish parties then started a boycott of the parliament and cabinet, but cracks in the list are beginning to show. More importantly, there doesn’t appear any way that the Kurds can gain anything from either the boycott or threatening to withdraw from the government. They don’t have enough seats and ministries from stopping business as usual, and have no real dependable allies to help them either. If Pres. Barzani insists on maintaining the boycott, some of the other parties may break away and go back, or more likely the whole thing will eventually be called off. This is a reflection of the state of current Iraqi politics. Many lists have problems with the premier, but have been largely ineffective in dealing with him, because they are too divided. That’s highlighted with the current Kurdish boycott.