The brutality of the Islamic State’s (IS) rule was well known from its control of parts of northern Syria. There are pictures on the Internet of the group beheading people, crucifying them, and shooting their opponents in that country. Now that it has conquered territory in Kirkuk, Ninewa, and Salahaddin IS has brought its violent form of governance to Iraq. There are growing reports of executions of members of the security forces (ISF), Turkmen, Yazidis, those that refuse to pledge allegiance to it, and those found guilty in its sharia courts. There are more and more reports coming out of these mass killings, and the group is far from over. 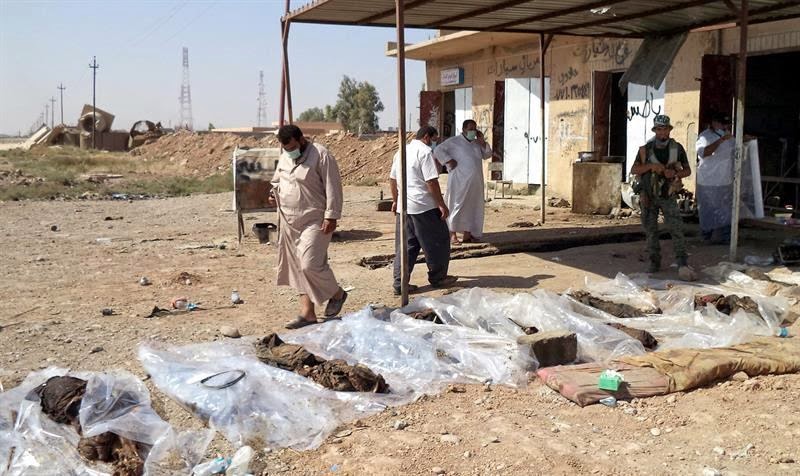 In June the Islamic State took Mosul and then moved south into Salahaddin. Immediately afterward the first stories of mass executions appeared. The first was in the Tikrit area involving soldiers captured at Camp Speicher. IS claimed that it killed 1,700 of them from June 11-14. The murders were video taped, photographed and extensively spread through social media by the organization to brag about its victory over the Iraqi government. It’s not clear whether that many were actually killed, but Human Rights Watch has estimated at least 770 died there in several different locations around the city. That was just the beginning. Three days later IS executed 25 soldiers it captured outside of Samarra. On June 21 84 members of the ISF and government workers were murdered in Tikrit, and then seven more soldiers in Shirqat on June 26. In August another 200 bodies of students were discovered in Camp Speicher after the area had been cleared by the ISF. Then in September when Sulaiman Bek in eastern Salahaddin was freed from the Islamic State a series of mass graves were discovered with a total of 89 bodies in them. So far there have been at least 1,411 killed by IS in Salahaddin.

Northern Ninewa was the first part of Iraq to fall to the Islamic State and has seen its own share of massacres. Right after the fall of Mosul 12 clerics were murdered on June 14. There have been a steady flow of people executed in Mosul and the surrounding area since then for people who refused to pledge allegiance to the IS or were found guilty for breaking its rules or were members of the security forces. More deaths were reported after the fall of the Sinjar area on August 3. That day the Islamic State killed 250 Yazidis in Sinjar, Solagh, Qiniyah, and Qahtanya in part of its organized campaign to wipe out the religious group. August 5 another 300 Yazidis died in Sinjar, and then 90 more in Kojo when that town was taken on August 15. Recently 500 bodies were found of prisoners from Badush prison outside of Mosul on September 10, and 30 were shot in Tal Afar on September 14. In total, there have been 1,426 deaths in Ninewa connected to IS executions since June.

Western Kirkuk was taken after the fall of Mosul in June and has seen the fewest mass killings so far. Most of the victims have been Turkmen with 55 killed on June 24 and July 3 in Bashir. Several Sahwa and others have been shot as well for a total of 116 since June 23.

How the Islamic State plans to rule is revealed in these mass killings. The true cost of their conquering of northern Iraq will not be known until it is expelled from the area. The 2,952 people who have been reported killed in the press and by human rights groups is undoubtedly only a fraction of those that have lost their lives so far. IS is determined to wipe out those that do not agree with it or who do not fit its vision of the Caliphate, which will lead it to more of these massacres in the future.

Independent Press Agency, "Daash executed 5 because of their opposition to the demolition of shrines," 7/27/14

Iraq Times, "Daash displaces Kurds and Shiites and execute ten of them in Sinjar," 8/3/14

Nordland, Rod, "As Fighting Spreads Through Iraq, Sunni Allies Turn on One Another," New York Times, 6/21/14