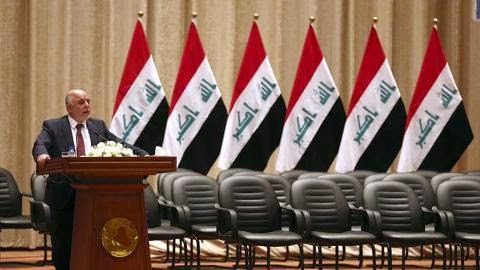 September 8, 2014 Prime Minister Haider Abadi’s new government was approved by Iraq’s parliament. As usual since 2005, all the major winners in the elections were given a position, which allows them to share in the spoils that come from running government offices. This was highlighted in the western press as a new “inclusive” administration, but was really nothing new at all. More importantly if there were hope that this new cabinet would help bring the country’s feuding political parties together to provide a unified stance towards the insurgency they would be disappointed.

Premier Abadi was successful in fulfilling one of his early promises to create a smaller cabinet. 23 ministers were sworn in on September 8 with two more, Defense and Interior unfilled for now because of political disagreements. In comparison, Nouri al-Maliki’s original government announced in December 2010 had 30 ministers with him as acting Defense, Interior and National Security Ministers. By April 2011 a larger administration was in office with a whopping 40 ministers, but Maliki never let go of the security ones. He would eventually name an acting Defense Minister and a deputy Interior Minister, while the National Security office was disbanded. When broken down by list Abadi’s State of Law, which is made up of Dawa, the Independents and the Badr Organization got six ministries, the National Alliance consisting of the Islamic Supreme Council of Iraq, the Sadrists, Fadhila, and the National Reform Trend received 7 ministries. Together that was 56% of the new cabinet. The Najafi brothers Mutahidun were given three ministries, while Deputy Premier Salah al-Mutlaq’s Arabiya, Loyalty to Anbar and the Iraqi Coalition each received one. Together the Sunni parties ended up with 26% of the ministries. The Kurdish lists got two positions, Iyad Allawi’s secular Nationalist Coalition was given one, and a Christian party took one as well. In comparison, the April 2011 government was split between the Shiite religious parties holding 21 of 40 ministries, 52%, the Sunnis had 12, 30%, the Kurds 6, 15%, and a Christian party one. The ethnosectarian breakdown was roughly the same between the two administrations. That showed that reports about inclusiveness were ahistorical as Maliki’s government was made up of just a wide range of parties as Abadi’s.

More importantly the new premier will have a tough time ahead of him just getting his new ruling coalition to work together. The reason why the Interior Ministry is empty is because former Transportation Minister and Badr Organization head Hadi Ameri has been nominated. The United States strongly objected to Ameri gaining that post because of his militia background. In 2005 Badr was given control of Interior under the Jaafari government and took over the commando units, set up secret prisons, carried out sectarian raids, and ran death squads out of the ministry. Today Ameri is leading his militias in his home province of Diyala, which Maliki put him in charge of security after the insurgent summer offensive began. Badr temporarily walked out of the parliamentary session on the cabinet to protest the fact that Ameri was not gaining the position. Hussein Shahristani is also being demoted from Deputy Premier in charge of energy policy under Maliki to Higher Education Minister. His Independents list, which is part of Abadi’s State of Law has rejected the office. The Sunni parties are supposed to get the Defense Ministry, but they can’t decide upon a name. Khalid Obeidi, an ex-Air Force general under Saddam Hussein, and a former nominee for Defense by the Iraqi National Movement after the 2010 elections has been mentioned as a candidate. The Kurds objected to his name back then because of his role with the former regime. Finally, the Kurdish parties have given the new prime minister a three month deadline to meet their demands over oil policy, the budget, and the disputed territories. In fact, the Kurds were considering not showing up at parliament on September 8 because Abadi had not responded to their desires beforehand, but attended because they realized Abadi had the votes to form a new administration without them, and were under pressure from the United States, Iran, and the United Nations to show up. There is internal dissent within the Kurdish parties as well with one report from Rudaw saying they had not finalized the names for the two ministries they received, which were Finance and Culture. All together this paints a picture of a dysfunctional government being put together just like the previous ones. That’s not to say that these divisions cannot be overcome, but Abadi has a full plate in front of him. The Shiite and Sunni parties are internally divided over who should be Defense and Interior Ministers. The Kurds have very little faith in Baghdad after the treatment they received at the hands of Maliki, and Abadi needs to take immediate steps to win them back. New Oil Minister Adel Abdul Mahdi of the Supreme Council might help as he has a long relationship with the Kurds. Still his party has expressed more centralizing ideas about energy policy in recent times. That’s nothing to say about the Sunni populace. Many of the Sunni politicians come from provinces that are partly under insurgent control, and some of their constituents are now supporting the militants. There’s no telling whether any of the new ministers have any standing in central and nothern Iraq that will be able to win back those areas.

Prime Minister Abadi has gone through a lot of struggles and his government has not even really started. His nomination for premier caused huge internal problems within State of Law as Maliki was intent upon holding onto power. The parliamentary session to approve his new cabinet faced walkouts and threats of boycotts. Two major Shiite parties are unhappy with him, and two of the most important ministries Interior and Defense are empty. Both the Kurds and the Sunnis also need to be won over as well. This is a huge number of tasks standing in front of the new premier, and there’s no telling whether he will be able to do anything about them. His two predecessors Ibrahim Jafaari and Maliki talked about reforms as well when they took office and never did anything substantial about them. Abadi has even less time to prove his worth as a unifier than those two.

Rudaw, “Kurds Undecided among Themselves, Despite Endorsing Iraq Cabinet,” 9/9/14