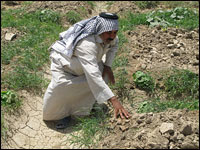 Farmer in Qadisiyah province showing his dried out fields
As reported earlier, Iraq is facing one of the worst droughts in recent history. This is especially devastating for Iraq because farming is the second largest business after oil. and its major employer. The drought is also affecting the country’s electrical supply as hydroelectric power from dams has dropped with the decrease in water. The drought has hit areas across Iraq from the three northern provinces of Kurdistan, and Tamim, to the east in Diyala, and into central Iraq’s Qadisiyah province as well. The lack of water has hit so hard that many farmers are abandoning their fields and migrating to other places in search of work. In the village of Fatamia in Diyala U.S. and Iraqi forces came across only three to four families in a village that once held thirty to forty. A resident said they had all fled the drought. Iraq’s Water Minister said a similar pattern is happening in northern sections of the country. The U.S. commander of northern Iraq said that the American military, United States Agency for International Development, the State Department, and experts from American colleges are all trying to come up with plans to modernize Iraq’s water system and use to alleviate the drought. The Water Ministry is also working to get farmers to ration their water use and limit planting, and working with neighboring countries such as Turkey, Syria, and Iran that control rivers and dams that control the water flow into Iraq. Those nations as well, are facing a drought.