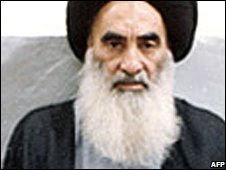 The U.S. invasion empowered the Shiite majority in Iraq. That allowed religious figures such as Grand Ayatollah Ali al-Sistani to gain in influence. While most Iraqi Shiites do not believe in clerical rule like in Iran, many still look to ayatollahs such as Sistani for advice. Sistani has had a role in a number of events including the 2005 elections, Moqtada al-Sadr’s Mahdi Army uprising, and the current negotiations between the U.S. and Iraq over the future of their bilateral relationship. At one point, many observers believed that Sistani was fading from the scene, yet in 2008 he appears to be in as strong a position as ever.

Grand Ayatollah Ali al-Sistani got his start in Iran before he came to Iraq. He was born in Mashhad, Iran in 1929 to a family of clerics. He went to religious school in Qom, one of the centers of Shiism. At age 21 he moved to Najaf, Iraq to finish his teachings under Grand Ayatollah Abdul Qasim Khoei. When he died in 1992, Sistani took his place, which set him on the path to become Iraq’s top ayatollah.

Today, Sistani holds the highest rank among Shiite religious scholars and clerics in Iraq, and has an international following in Iran, Lebanon, Syria, and Paksitan. He follows his mentor Khoei’s stance known as quietism that believes religious men should not run the government because it would divert them from their duties to their faith. When Iran had its revolution led by Ruhollah Khoemini, Sistani came to oppose it. He does believe that clerics should be consulted and give advice however.

During Saddam’s rule Sistani was seen as a problem that could not be eliminated. Sistani supported the Shiite uprising after the 1991 Gulf War. That put him on Saddam’s hit list. However with sanctions and an unruly public, Saddam never felt that he could assassinate Sistani as he had done with other leading clerics in the country because it might cause more trouble with the Shiites than the government could handle at the time. Saddam resorted to muzzling Sistani by putting him under house arrest, closing his mosque, and not allowing him to give sermons. He remained under arrest until the 2003 U.S. invasion.

Sistani does not make many appearances or announcements, so his opinions need to be gleamed from statements by his aides and his websites where he takes questions from the people. Sistani himself hasn’t been seen in public since August 2004 when he went to England for medical treatment. There have been consistent rumors of his bad health, which led him to invite a small group of reporters to interview him on August 24, 2008.

On the U.S., Sistani opposes the occupation, and blames America for many of the country’s problems since the invasion. He has never met with any U.S. official. There was a controversy over how far his opposition went in May 2008 when the Associated Press reported that he had privately said it was okay to carry out armed resistance to occupation. That story was later proven false. A pro-Sistani cleric from Karbala told the Voices of Iraq, “Sistani’s stance is clear since toppling the former regime (of Saddam Hussein) by calling for sticking to civil resistance to drive foreign troops out of Iraq.” On the Status of Forces Agreement (SOFA) between the U.S. and Iraq, Sistani’s position is that the negotiations have to be transparent, the SOFA needs to protect Iraqi sovereignty, all parties need to agree, and it has to be ratified by parliament. Iraqi officials have consulted with Sistani over the agreement. It was after one such meeting in early July that Iraq’s national security advisor Mouwaffak al-Rubaie declared that any agreement needed to include a U.S. withdrawal. This is believed to be Sistani’s own position.

With the Sunnis, Sistani was opposed to reforming the deBaathification system when the Accountability and Justice Law was up for debate in 2007. Ahmad Chalabi of the Iraqi National Congress was the head of the deBaathification committee, and convinced the Grand Ayatollah that the law was bad. The law was eventually passed over his objections, showing that the Shiite parties were not beholden to follow his every wish.

Sistani has been displeased with the parliament before. In January 2008 he refused to bless the body during the pilgrimage season, because he said they needed to work on the country’s problems rather than travel to religious shrines. At the time, there were so many absentee politicians since the summer recess of 2007 that they didn’t have enough members to carry out any business.

The Shiite community has been Sistani’s main concern. One of the major issues has been what to do about Moqtada al-Sadr. Sistani has been asked to disband Sadr’s Mahdi Army before, but hasn’t done so. In 2004, Sistani helped broker a cease-fire between Sadr and the U.S. when his followers rose up against the occupation. During the sectarian war period that started in 2006, Sistani believed that the Sadrists were needed to protect the Shiites from the Sunnis. In early 2007, the Grand Ayatollah convinced Sadr to end his boycott and rejoin the Shiite coalition in parliament, the United Iraqi Alliance. Later, Sadr allegedly asked Sistani for advice about what he should do about his movement. Sistani is said to have told him that he could either face the Shiite masses or remove himself from the public. Afterwards Sadr left Iraq to go to religious school in Iran. Whether that was to increase his religious standing and leadership, or a way for Sadr to drop out of the Iraqi scene is not known. In 2008 as the government confronted the Mahdi Army in Basra and Sadr City, Sistani was asked to issue a pronouncement ordering the Sadrists to disarm. Sistani said that only the government has the right to bare arms, but he didn’t ban the militia. Instead he said that only the founder of a militia could end it. It is believed that Sistani is still worried about the resurgence of sectarian fighting between the Shiites and the U.S. organized Sunni Sons of Iraq, so he may want to keep an armed Shiite force. Since the crackdowns, the Sadrists have been weakened and many are discontent. Sistani and other religious leaders in Najaf are trying to take advantage of this situation by breaking away some of Sadr’s followers, to build up their own support. Sadr has after all, been the biggest challenge to Sistani since the invasion.

Just because Sistani is an ayatollah hasn’t meant that he has escaped the country’s violence either. In 2007, at least six of his aides were assassinated and others went into hiding. In March 2008 one of his deputies was wounded in an attack. More recently, on August 23, 2008 one of his followers, the cleric Haider al-Saymari was gunned down in Basra while visiting there from Iraq. Many people believe Sistani’s political rivals, such as the Sadrists, were responsible for these attacks.

It was not that long ago that many Iraq watchers believed that Grand Ayatollah Ali Sistani was fading from the scene. The country was descending into civil war, and younger clerics like Moqtada al-Sadr were asserting themselves over older leaders like Sistani. The murders of several of Sistani’s aides only added to the belief that Sistani was under siege and staying out of the public eye. Those ideas proved to be short sighted. In 2008, Sistani is once again playing a prominent role in Iraqi politics. He was called upon during the fighting against Sadr earlier in the year. His opinion is believed to be the deal breaker or maker on any status of forces agreement signed between Iraq and the U.S. Perhaps with the new status quo in Iraq that is beginning to move away from violence as the main way to resolve problems, politicians and the people are more willing to listen to Sistani’s advice. He has been one of the bedrocks of the Shiite community for several decades now, and is again proving his staying power.

Roggio, Bill, “Ayatollah Sistani on the Mahdi Army: ‘the law is the only authority in the country,’” Long War Journal.org, 4/9/08