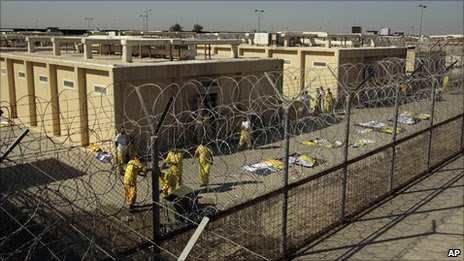 This is the second time since the U.S. handover that detainees have escaped from Karkh. A few days after the Iraqis took control four members of Al Qaeda’s umbrella organization, the Islamic State of Iraq, that included its Minister of Justice, Minister of Finance, and a judge, were allegedly driven out of the prison by the warden.

These were both major embarrassments for the United States. The Americans appointed and groomed the Karkh Prison warden before he ran off with the Islamic State leaders. Two months later, Al Qaeda members escaped from the U.S. run part of the facility, which is supposed to be the most secure part of the prison. The first event could be blamed upon the Iraqis, but the second was on the Americans. Security at Karkh obviously needs to be reviewed and tightened before anyone else gets away, and the Islamists win another propaganda victory.

Associated Press, “Four escape from US custody in maximum-security Baghdad prison,” The National, 9/9/10

Email ThisBlogThis!Share to TwitterShare to FacebookShare to Pinterest
Labels: Al Qaeda in Iraq