U.S. Bombing To Soften Up Saddam Started In Mid-2002

March 2003 was when the U.S. invaded Iraq, but preparatory military operations started several months before. Both England’s Royal Air Force (RAF) and the U.S. Air Force used the no fly zones over southern and northern Iraq as the pretext for a series of large bombing raids to destroy the country’s radar, air defense system, and other targets beginning in mid-2002. 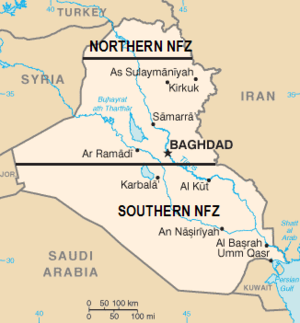 Around May 2002 the RAF and U.S. Air Force began doubling their bombings of Iraq. The U.S. and England claimed that they were only responding to Iraqi fire over the two no fly zones, but the American military later admitted that they were taking advantage of the situation to strike Saddam. In December for example, U.S. planes were fired upon over Kurdistan, but then struck southern Iraq in retaliation.

The two countries used twice as many bombs in the second half of 2002 as all of 2001. In September 2002 for instance, the RAF launched a 100 plane raid on Iraq’s western air defense system. Many of these attacks were coordinated with U.S., Australian, Jordanian, and British special forces and commandos, plus CIA officers who were operating within Iraq from August 2002 until the U.S. invasion in March 2003. The raids were aimed at Iraq’s command and control facilities, radar stations, communication centers, and Republican Guard units.

The attacks picked up when United Nations inspectors returned to Iraq at the end of 2002. In January 2003, when the inspectors released their initial findings to the U.N.’s Security Council that they had found no evidence of weapons of mass destruction or a nuclear program, the U.S. and England were carrying out their heaviest bombing to date. In total, a U.S. Air Force general said that the two countries flew 21,736 sorties against Iraq, dropping 606 bombs on 391 targets from 2002 to March 2003.

The American Congress authorized the use of force against Iraq on October 16, 2002. Afterward President Bush said, “I have not ordered the use of force. I hope the use of force will not be necessary. Our goal is to fully and finally remove a real threat to world peace and to America. Hopefully this can be done peacefully. Hopefully we can do this without any military action.” What the president stated wasn’t quite true. The White House had actually started an air campaign against Iraq five months before the Congressional vote. Publicly it said that it would work with allies and eventually the U.N. to resolve the conflict. On the other hand, it was moving ahead with military planning, stepping up air sorties, and infiltrating forces into Iraq all of which made the invasion more inevitable. In fact, the U.S. was hoping that the strikes might provoke Saddam Hussein to retaliate, which would provide a justification for war. That didn’t happen, but the administration eventually got what it wanted, and the bombings reduced the number of targets it had to hit when the invasion finally started.

Rangwala, Glen, Hurd, Nathaniel, and Millar, Alistair, “A Case For Concern, Not A Case For War,” Middle East Report Online, 1/28/03