Iraqis In A Mixed Mood In Latest Public Opinion Poll

The last several public opinion polls done in Iraq show a public that is quickly turning sour on their situation. A new one conducted by the Gallup organization in September 2011, and released in January 2012, revealed a steady increase in people who felt despondent. It was based upon a set of questions that have been asked of citizens since June 2008. It went along with other surveys that portrayed people as having increasingly mixed emotions about the state of Iraq.

The Gallup company has been asking Iraqis about their personal situation since June 2008. The latest results were released in a report in January 2012, based upon 1,000 adults 15 and older who were surveyed in September 2011. When asked to rate their mood from thriving to suffering, 25% said the latter, compared to 7% for the former. That was the worst response since the polling began in June 2008, when 30% of Iraqis said they were suffering, and 9% said that they were thriving. In January 2009, both responses dropped to 23% saying they were suffering, and 11% thriving. In mid-2009, 18% were suffering, and 11% were thriving. In January 2010, things evened out a bit with 14% feeling like they were suffering in January 2010, compared to 16% who said thriving. Towards the end of the year, 14% said they were suffering, and 9% said they were thriving. By January 2011, 19% told Gallup they were suffering, and 14% thriving, before dropping to the latest results. Likewise, Iraqis feeling stressed went from 34% in June 2008 to 70% in September 2011. Those angry went from 38% in June 2008 to 60% in September 2011. The same swing was seen when asked whether they were happy or sad. In June 2008, 54% felt happy, 44% said they felt joy, 38% answered they felt angry, 35% were sad, and 34% were stressed. By September 2011, that had switched to 70% feeling stressed, 60% being angry, 46% feeling sad, 41% being happy, and 41% joyous. The reasons for the growing negativity amongst Iraqis could be many. First, in 2008 there was still major fighting going on in the country, and the political situation seemed unstable. By the middle of 2009, provincial elections had occurred, and things seemed like they might be turning around. In January 2010, Iraq was heading for a new round of voting for parliament. By late-2010, Iraq’s politicians were still arguing about who was going to run the government, which has dragged onto the present day. These political arguments, which have been going on since the middle of 2009, can only draw down the mood of the country since so much is dependent upon the government. While it would be easy to also blame violence for this swing, security has slightly improved since 2009, so that doesn’t appear to be a legitimate cause. There have also been several pay increases for public employees over the last few years, which are the largest group of workers in the country. That leaves the political situation as the likely culprit. 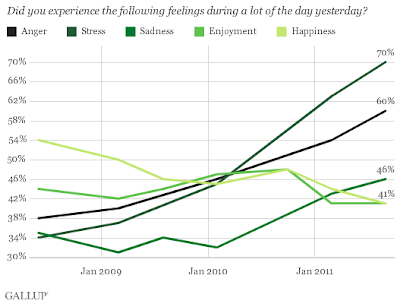 The Gallup poll goes along with several other surveys that have been conducted since 2010. At the end of that year, Greenberg Quinland Rosner Research conducted a survey for the National Democratic Institute, which found that Iraqis were evenly split on whether they felt the country was doing well or not, with 45% saying it was going in the right direction, and 44% saying it was going wrong. In June 2011, that same organization released another report that found 49% of respondents felt that the country was going in the wrong direction, and 42% in the right one, mainly because of the poor performance of their politicians. Finally, a Zogby poll done in November 2011 found very mixed views, with 31% feeling that Iraq was on the right track, and 56% believing that it was on the wrong one. At the same time, 54% were somewhat to very optimistic about the future, compared to 32% who were not. There were two common factors amongst all the polls. First, Iraqis consistently show a mix of both optimism and pessimism about their country depending upon the question asked of them. Second, the common factor in all the surveys, which usually asked about economic as well as political issues, was the belief that the government was not performing well. That’s another reason to believe why so many felt bad in the newest Gallup poll was because politicians were seen as failing.

Iraq is still a country facing many problems. While some things have improved such as security, and more oil is being produced now than since the 2003 invasion, others are still a struggle such as electricity, jobs, and getting the government to work. That’s why there are so many mixed opinions in these polls. While 25% said they were suffering in the latest Gallup one, 41% still felt happiness and joy. That’s likely to be the results for the foreseeable future, as the country has to overcome a plethora of issues, some of which Iraq may never solve. That places Iraq in the same category as many other developing countries around the world. While Iraqis might want to see things improve in their country, leading to the positive responses, their every day life is still rather hard, and their government is dysfunctional, which is why there are the negative answers as well.

I hope that this item is of interest. I also appears on my own blog and originates from the web-site of "Labour Friends of Iraq" -
http://dronfieldblather.blogspot.com/2012/03/abdullah-mushin-has-long-term.html