The Death Throes Of The Maliki Government In Iraq

Iraq’s political class has been slowly but surely moving towards a new government since the April 2014 parliamentary elections. A speaker of parliament and president were named, but the final barrier to completing the process was Prime Minister Nouri al-Maliki’s insistence on a third term. The Sadrists, the Islamic Supreme Council of Iraq, the Kurdistan Democratic Party, and Mutahidun were all demanding that Maliki’s State of Law list come up with an alternative for the premiership, while Maliki claimed that his victory in the polls gave him first dibs at forming a new government. This was part of the prime minister’s strategy to drag out the process as long as possible in the hopes that he could out last his opponents, which was what he did in 2010 to gain a second term. This strategy backfired, as not only did State of Law fracture in the process, but so did Maliki’s own Dawa Party. Those differences became public when the National Alliance put forward Deputy Speaker of Parliament Haidar Abadi from Dawa as its candidate for prime minister, which was condemned by Maliki. The premier continues to try to cling to power, but the writing is on the wall that his days are numbered. 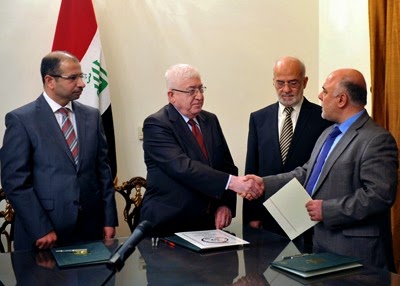 The nomination of Haidar Abadi (right) seen here with from left to right Speaker Jabouri, President Masum and Ibrahim al-Jaafari of the National Alliance marks one of the final steps in the end of the government of Nouri al-Maliki (Al Mada)

The future of Maliki’s government came to a head when his own list abandoned him. On the night of August 10, 2014 the prime minister went on television attacking President Fuad Masum for not naming a candidate for prime minister according to the constitutional deadlines, and threatened to sue him in court over it. At the same time Maliki called out the security forces in Baghdad’s Green Zone setting off wild rumors that he was staging a coup. His argument against Masum was that since State of Law (SOL) won the most votes in the April elections it deserved to name him as the candidate for a third term. This came after SOL held a meeting earlier in the day over the premiership. There was no news over whether anything came of that, but the list was fragmenting beforehand. For example, on July 26 Maliki’s Dawa Party, which is part of State of Law said that it would follow the guidance of Ayatollah Ali al-Sistani who said that Iraq’s leaders should not “cling” to power. The next day, the National Alliance (NA) made up of SOL, the Sadrists, and the Islamic Supreme Council of Iraq (ISCI) put forward Deputy Speaker of Parliament Haider Abadi from the Dawa Party as its candidate for prime minister. According to reports, 12 members of Deputy Premier Hussein Shahristani’s Independents within SOL and 38 from Dawa backed Abadi’s nomination. Maliki and his remaining supporters immediately struck back. The prime minister returned to television accusing the United States and parts of State of Law of conspiring against him, Dawa parliamentarian Khalaf Abdul Samad said that Abadi did not represent the list, while Maliki’s son in law Hussein al-Maliki said that Abadi’s candidacy was illegal. At the same time SOL lawmaker Hanan al-Fatlawi told the press that the Supreme Court had named it the largest bloc thus giving it the sole right to name the candidate for prime minister, a story quickly denied by the judiciary. These all appeared to be wild verbal swings by Maliki and his shrinking base in light of their realization that their game to hold onto power was finally coming to an end. To highlight how much Maliki’s support has shrunk, when he went on TV he was only backed by 28 lawmakers out of 95 from State of Law, and SOL’s Twitter account started criticizing him on August 10 as well. The prime minister’s strategy all along was to repeat what he did in 2010. Then SOL came in second place to the Iraqi National Movement (INM). He then got the Supreme Court to rule that it wasn’t the list that won the election but the one that could form the largest coalition afterward that had the right to nominate the prime minister. Maliki then played upon the divisions within the INM, and worked for months to wear down the other parties until he could form a new government. He has tried to play the same game this year, but 2010 has come back to haunt him. That court ruling meant that SOL could not nominate him since it is not the largest list, which was why he agreed to join the National Alliance. The Sadrists and ISCI ran against Maliki, but he hoped to outlast them once again. Instead his plan backfired as SOL and even Dawa split over a third term. Some members could’ve seen the writing on the wall that his time was up, and some might have been influenced by Iran who also came out against Maliki’s return to office. Whatever their motivation, they have lost faith in Maliki putting the nail in his coffin.

On the other hand, many other blocs and political leaders immediately were happy about Abadi’s nomination. The Supreme Council and Moqtada al-Sadr both issued statements welcoming Abadi, and the Patriotic Union of Kurdistan hoped that he would ease the problems between the central and regional government. When Abadi went on television Deputy Premier Shahristani, Speaker of Parliament Salim Jabouri of the Iraqi Islamic Party, and members of the Sadrists, ISCI, and the Fadhila Party accompanied him. Many of the major parties have been waiting for this moment when the National Alliance would come up with an alternative to Maliki. There might be some complaints that since Abadi is from the Dawa Party he may not bring the types of changes that all are hoping for, but it does offer the possibility of a fresh start.

Nouri al-Maliki came away from the April balloting assured that he would get another term, which is why he has dealt with the recent events so poorly. Maliki received the most personal votes, and State of Law won a plurality of seats in the new parliament. He then joined with the National Alliance to give himself the largest bloc. The problem is Iraqi elections never go the way most believe. Rather than finding the chinks in his opponents’ armor like he did in 2010, it was SOL who ended up breaking apart. Now he’s left to verbal threats, claims of illegality, and intimidating maneuvers by the Iraqi Security Forces in Baghdad. Maliki still believes that he should be the leader of the country, which is why he is not going quietly. He will continue with these tactics, but with all the support Abadi is garnering it will all be over when he presents his ruling coalition for approval to parliament in the next 30 days.

Buratha News, “Keep their faces and their names well ..!..The 28 deputies who were sold and bought through misguided guidance,” 8/11/14
- “ISCI congratulated Dr. Haider Abadi after the assignment, headed by Minister,” 8/11/14

Al Mada, “Sadr welcomes commissioning of a candidate for prime minister by the “grace”, and calls for the Dawa Party not to resort to violence,” 8/11/14
- “Sunnis and the Kurds: The Committee will work with Abadi to launch political reform,” 8/11/14

Al Masalah, “Dawa Party renews its commitment under the guidance of reference and timings of the constitution on forming of government,” 7/26/14
- “Khalaf Abdul Samad: 45 out of 54 deputies in the Dawa block did not vote for Ebadi,” 8/11/14
- “Maliki: assigning no value to Abadi, and the rule of law is the largest bloc,” 8/11/14

Al Rafidayn, “Araji: representatives of the National Alliance chose Abadi and some did not vote at all,” 8/11/14
- “Fatlawi: Haider Abadi does not represent the coalition of state of law,” 8/11/14

The first week of April was a first. That was because there were more attacks by pro-Iran groups in Iraq than by the Islamic State. There we...