In March 2013, the Gallup organization released its latest poll from Iraq. It covered security, foreign influence, political stability, corruption, and jobs, and found that in four of those five categories things had either improved or stayed the same since the United States withdrew its military forces in December 2011. Although Gallup tied the survey to the exit of the Americans, it actually showed that many issues were outside of their influence, and the results were roughly in line with previous polls. 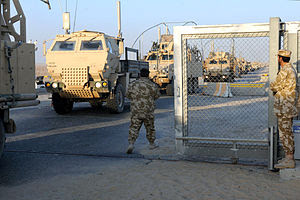 Iraqis feel much is the same after the U.S. withdrew at the end of 2011 (Wikipedia)

Gallup asked Iraqis about how they felt about certain issues after the Americans had pulled out their military units. The survey was conducted from October 8-12, 2012, and included 1,000 people with a margin of error of +/- 3.9%. On security, freedom from foreign influence, political stability, and corruption 50% or more of respondents felt that things were better or the same. On security for example, 42% said things were better, 38% felt it was the same, and 19% thought it was worse. Only with regards to jobs/unemployment were things different with 9% seeing an improvement, 34% felt it was the same, and 55% said the situation was worse. When broken down by sect, Sunnis had a worse view than Shiites. On corruption there was the widest gap with 69% of Sunnis saying it was worse, compared to 39% for Shiites. On political stability the two were more alike with 43% of Sunnis saying it was worse, and 40% of Shiite feeling the same. The two groups were also close on security with 25% of Sunnis seeing it as deteriorating, compared to 15% for Shiites. The results showed that on most of the issues asked about Iraqis felt that things were largely unchanged since the American military left. On security, 80% said that things were better or the same. That’s a reflection of the fact that violence in Iraq has dramatically dropped since 2009, and is limited to specific cities these days, meaning that the vast majority of citizens are no longer affected by it much. On freedom from foreign influence, 68% answered that things were better or the same. That could be because many Iraqis saw the U.S. as the largest foreign influence in Iraq, and could only get better after they left. It also contradicts many Western commentators that have claimed that Iran has come out the winner in the Iraq war as there were few respondents who felt that foreigners had gotten any more powerful since 2011. Finally, 40-50% believed that corruption and jobs improved or stayed the same. The U.S. had little influence over either, so the withdrawal would not affect opinions of those two issues. The differences between Sunnis and Shiites have been seen in other polls, and showed the discontent amongst the former. As the current protests show, there are many Sunnis who are upset with the current status quo, so there was no surprise that they had more negative responses in this survey.

Do you think things have gotten better, stayed the same or gotten worse since the U.S. military withdrawal in 2011?

Sunni vs. Shiite Views
Do you think things have gotten better, stayed the same or gotten worse since the U.S. military withdrawal in 2011?

Gallup’s findings were roughly in line with what Iraqis told previous pollsters. On outside influence, political instability, corruption, and jobs for example, responses were very similar to a May 2012 poll released by Greenberg Quinland Rosner Research. In the Gallup poll 30%, 20%, 11%, and 9%  respectively said things were better on those four issues, compared to 25%, 21%, 18%, and 10% in the Greenberg survey. Going further back, there are other comparisons. In September 2010, the International Republican Institute reported that 75% of respondents felt that security was better or the same, while 80% thought the same in the May 2013 report. Similarly with jobs, 36% said that things were better or the same in the Republican Institute survey, 42% responded that things were better in a December 2010 and a June 2011 Greenberg report, 30% in a November 2011 survey by Zogby, with the only exception being a May 2012 Greenberg poll that did not include Kurdistan that found only 10% of those polled felt jobs had gotten better. Looking at six surveys done by the BBC, ABC, NHK from 2004-2009 showed that Iraqis have had a positive view of security since at least 2008, while there has been widespread skepticism that employment has gotten any better since 2004. This review reveals that the Gallup fieldwork is in line with many similar studies, and that the status quo in public opinion amongst Iraqis has largely remained the same for the last several years. The withdrawal of American troops did not dramatically change how Iraqis saw their country.

After the U.S. military left Iraq many in the West believed that the country would fall apart. The majority seemed to think that security would deteriorate. The Gallup survey showed that many Iraqis did not feel that way. Views about security have remained relatively constant since 2008 for instance with most stating that things were better or the same. What Iraqis are most concerned about today is their government and economy. Those are domestic issues, which the U.S. could influence, but which ultimately only Iraqis can resolve. That’s likely why the withdrawal of American forces did not dramatically change opinions from the Gallup poll from previous ones. There would have to be dramatic changes in the current status quo like a political breakthrough between the ruling parties for surveys to start registering major differences in results.