Iraq’s northern Kirkuk pipeline to Turkey has faced problems for a long time now. Its old age means that it can only pump a fraction of its capacity. Turkish and Iraqi insurgent groups have bombed it for years. Now a series of leaks have shut it down for weeks during the summer. This has undercut the Oil Ministry’s desire to boost output, and led to plans to build a new pipeline to Turkey. It highlights the barriers that Iraq faces to achieve its goals of becoming one of the largest oil producers in the world.

2013 has been a bad year for the northern pipeline. In February, April, twice in May, June, and July Iraqi militants either bombed the main line to Turkey or the fuel line to and from the Baji refinery. All of these attacks occurred in Ninewa and Salahaddin provinces. In early August, the Oil Ministry told the press that there were more than 30 attacks in total upon the Kirkuk line since the beginning of the year. At the same time there were a number of leaks, which increased in seriousness as the year progressed. The first was in March, but the real problems started during the summer. On June 4, the line was shutdown for technical problems for two days. On June 16 more leaks were found. The North Oil Company claimed they were repaired by June 21, but the line shut down later that day, and didn’t restart until July 4. A few days later leaks started again, which weren’t fixed until July 16. More technical problems occurred on July 31, followed by another unspecified shutdown on August 6. That meant the line has mostly been out of commission for two months. The result is that exports have dropped dramatically. At the beginning of the year, the flow through the Kirkuk line actually increased from an average of 264,500 barrels a day in January to over 300,000 barrels a day from February to April. That dropped to 283,800 in May, then 193,300 in June, and 168,000 in July. This decline has contributed to Iraq’s overall export numbers going down as well from 2.62 million barrels a day in April, tied for the most since 2003, to 2.48 million in May, and 2.33 million in June. 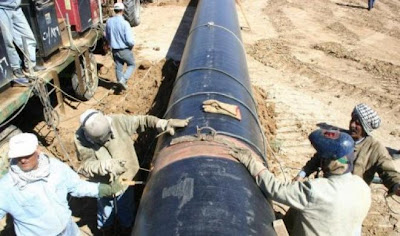 Insurgents on both sides of the Iraq-Turkey border have targeted the northern line for years now. In 2012 for instance, the Kurdistan Workers Party (PKK) blew up the line almost every month. In February, March, (1) April, June, (2) July, August, October, and January 2013 the PKK either took responsibility or were blamed for attacks in Turkey upon the Kirkuk line. The Workers Party considered this part of their economic war against Ankara. In fact, the PKK blew up the northern line four months after it was opened in 1984. That campaign only stopped in March 2013 when Abdullah Ocalan, the head of the group, announced a ceasefire with Turkey as the two sides entered into peace negotiations. Despite these concerted efforts, the bombings had very little affect upon exports. That’s because they are only able to shut down the line for a few hours to a day or two, not enough to really cut into the flow of oil. They do obviously add costs to operating and protecting the line for both Iraq and Turkey.

These issues pose a serious problem for the Oil Ministry’s development strategy. It wants to increase the operating capacity for the northern pipeline from 600,000 barrels a day to 1.3 million by the end of next year. The line actually already has a capacity of 1.5 million barrels, but is unable to reach that level due to its old age, and need for repairs and rehabilitation. There are also plans to build a new line to Turkey since the existing one has so many issues. This would coincide with expected increases from northern fields such as Kirkuk, Bai Hassan, Jambur, Ajeel, Hamrin, and the future exploitation of Qayara and Najma. Those plans would have to be put on hold unless the maintenance issues with the northern line are immediately addressed since a brand new one is still a long ways away.

Iraq wants to become a dominant oil producer, but its lack of adequate export facilities is holding it back. The northern Kirkuk line only carries around 1/3 of the nation’s exports, but the dramatic decline its faced in the last couple months due to leaks has brought down the overall numbers. The northern line is showing its age right now. It needs to be upgraded, and plans for a new pipeline fast tracked. Until then it will not only operate at below capacity, but far below its regular levels due to the constant maintenance work necessary to keep it up and running. The bombings are more of a nuisance, but insurgents can stop repair crews from doing their job. This is an important factor for why Iraq’s exports have stagnated for the last sixteen months. It needs a massive upgrade in its infrastructure to achieve its goals. This has been known for years, but it is taking a long time to resolve, something that should have been expected with Iraq’s problematic government.

Al-Mada, “Iraq is losing 400 thousand barrels of oil because of the violence and attacks threaten to paralyze the line Kirkuk – Ceyhan,” 7/27/13
- “Resume pumping oil from the Kirkuk oilfields to the Turkish port of Ceyhan,” 7/4/13