For the last several years the media has found examples of the Kurdistan Regional Government (KRG) smuggling oil to Iran. This adds to its conflict with Baghdad, which wants to control the country’s energy policy, and with Western countries that have imposed sanctions on Tehran for its nuclear program. Since this is a longtime business that the Kurds have been operating for at least the last two decades there is no reason for them to stop, and the ruling parties may even have plans to expand it in the coming years.

In August 2013, Reuters and Asharq Al-Awsat reported that the KRG was continuing to truck oil products to Iran. The Reuters story stated that up to 30,000 barrels a day were being shipped across the border. A source claimed that Kurdish officials had approved a second route to Iran, and that this was an effort to appease Tehran for exporting oil to Turkey. Tehran and Ankara are regional rivals. The Asharq piece repeated the long-time Kurdish cover story that it was private companies that were doing the trade, that it was therefore not sanctioned by the KRG, and that energy firms in Kurdistan had no idea what happened to the oil after they produced it. The Kurds have been exporting oil illegally to Iran since at least the 1990s when sanctions were slapped on Iraq for the invasion of Kuwait if not beforehand. Occasionally this comes to the public eye like in August, but the KRG obviously has no intention of ending it. 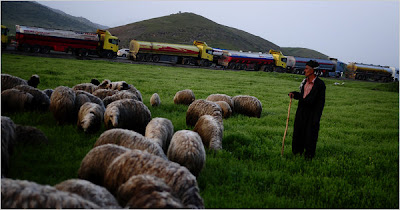 This picture from July 2010 by the New York Times of tankers lining up at the Iranian border caused a controversy for the KRG, but only highlighted what the Kurds had been doing for years (New York Times)

There are many other examples in recent years of when the Kurds’ secret dealings with Iran were revealed. The most famous was in July 2010 when Sam Dagher of the New York Times went to the Iraq-Iran border and saw thousands of tankers lined up waiting to cross. A Kurdish official said that the profits were going to the ruling parties the Kurdistan Democratic Party (KDP) and the Patriotic Union of Kurdistan (PUK), oil companies in the KRG, and even politicians in Baghdad. The embarrassment at the publicity, and its violation of international sanctions against Tehran, led Kurdistan to claim that it was cracking down upon any smuggling. It then tried to place blame upon private companies, and the central government’s subsidies on fuel, which led traders to buy it cheap in Iraq, and re-sell it to Iran for a profit. Baghdad immediately complained, which added to the on-going dispute between the two sides over control over oil policy. The Maliki government threatened to cut the KRG’s budget in retaliation, while the Kurds refused to hold any official talks on the matter. The media then continued to find that trucks were going back and forth to Iran with no changes. Not only that, but Reuters reported that drivers told it that they got their fuel, documents, and destinations from KRG officials. The mayor at a border crossing stated that all the tankers were under contract to the authorities, while a shipping company in Irbil said that it had been working for the Natural Resource Ministry since 2009 to send oil products to Iran. The opposition Change List also released documents showing that the Kurdish Finance Ministry okayed the trade as well. After a few weeks the story disappeared from the headlines, but then returned in 2011 and 2012. (1) Again, this enraged Baghdad. The reason why this illicit trade has continued on for so long, and continues to this day despite sanctions is that there are no incentives for Kurdistan to stop it. First, the profits go directly to the two ruling parties, providing them with an independent source of funds outside of the portion of the budget they receive from Baghdad. The trade is also split up between the two with smuggling to Turkey dominated by the KDP, while the PUK handles Iran. In turn, a percentage of the money goes to companies that are producing in Kurdistan. They have been waiting years for an official export deal with the central government, which would allow them to ramp up production, and start earning profits. Those agreements have been few and far apart, and always breakdown. That limits the energy businesses to supplying Kurdistan. Smuggling is a way to appease them with providing some additional money for all the costs they are incurring.

As Irbil develops its energy sector it is hoping to move from smuggling operations like these to making a legitimate business out of it. The KRG has been trucking oil to Turkey as long as it has been to Iran, and recently has gotten official sanction from the former. The Kurds may be hoping to accomplish the same thing with its illicit trade with Iran. That will be extra difficult given the sanctions Iran is facing for its nuclear program, but long term Turkey and Iran are the natural trade routes for Kurdistan’s oil. This would also increase tensions with Baghdad, but the KRG does not believe that it has to answer to the central government at all. The Kurds are hoping to make its petroleum business the basis for an independent economy. Smuggling doesn’t provide enough revenue to achieve that, and doesn’t appeal to the energy companies that have invested there either. It’s only by obtaining bilateral trade agreements for tankers, and then eventually building pipelines that the ruling parties can achieve their goals. That’s still a long way off, and may not work out as planned, but until then stories of Kurdish trucks going back and forth with Iran will continue.

Joel,
It seems to me that this news is a shot in the foot for the Kurdish aspiration for independence.
Faisal

I would disagree Faisal. The Kurds have been doing this business for years, and they are not going to stop anytime soon. The U.S. has no real say in the matter, and neither does Baghdad. All they can do is complain. Also, the more news emerges of Kurdistan shipping oil to Turkey and Iran, the more it becomes normalized and accepted, which is the ultimate goal of the KRG, to turn this illicit trade into a formal one.