The fighting in Iraq has led to a new internally displaced crisis. Nearly 900,000 people have fled their homes over the last seven months. The initial cause was the battle in Anbar, which began when Prime Minister Nouri al-Maliki decided to shut down the protests sites there at the end of December 2013. The insurgent summer offensive, which led to the fall of Mosul and roughly half of Salahaddin and Kirkuk provinces in June 2014, has led to a new wave of refugees. The displacement continues to this day as the fighting spreads and the Islamic State (IS) begins to enforce its rule on northern Iraq. 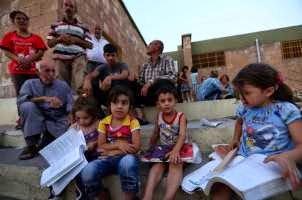 Christians who fled Qaraqosh, Ninewa for Irbil in June 2014 (AFP)

There have been two waves of displacement this year. From January 1 to May 31, 2014 the International Organization for Migration (IOM) counted 79,627 families leaving their homes, which was 477,762 individuals (IDPs). These were mostly people fleeing the fighting in Anbar, which started at the very end of December 2013. Most came from Fallujah and Ramadi. 48% went to Irbil, 31% went to Sulaymaniya, and 15% are along the eastern border with Kurdistan waiting to get in. From June 1 to July 16 almost the same amount of people were displaced this time by the insurgent offensive, which swept across Ninewa, Salahaddin, and Kirkuk governorates. During that period another 79,627 families, 477,762 people, left their homes. 49% of those, 33,312 families, 199,872 individuals were from Ninewa, while 40%, 27,231 families, 163,386 people were from Salahaddin. Additionally, another 1,400 families from Anbar, 650 from Diyala, and 100 from Baghdad lost their residences. In total, there were 2,882 families, 17,292 people displaced form Diyala, 2,570 families, 15,200 individuals from Anbar, 902 families, 5,412 individuals from Kirkuk, 706 families, 4,236 people from Baghdad, 446 families, 2,676 individuals from Babil to join those from Ninewa and Salahaddin. Most are within Ninewa, 17,206 families, followed by Irbil, 16,155 families, Sulaymaniya, 8,231 families. Another 7,091 families were on the move. These are only families that have been registered by IOM. The actual numbers are probably higher. In Anbar for example it’s estimated that nearly 150,000 have been displaced, and IOM only counted a fraction of that.

As fighting continues across central Iraq and the Islamic State imposes its will on its conquered territory more people are fleeing. July 19 IS gave an ultimatum to Mosul’s Christians telling them they had to leave the city leading hundreds to pack up and go. On July 18 a member of the security committee on the Babil provincial council said that around 600 families had been displaced from Jurf al-Sakhr, which the security forces have unsuccessfully cleared of IS.  July 16 a police source told Alsumaria that 200 families had left Jalawla in Diyala. The peshmerga moved into the area after the fall of Mosul and it has seen nearly constant fighting with insurgents since then. Flashpoints like these are where people are likely to continue to be displaced.

Groups like IOM and the United Nations were caught off guard by the recent fighting. They were already hard pressed to deal with the existing IDPs, which number over 1 million and date from the civil war of 2005-2008. When the new conflict started in Anbar the U.N. made an emergency call for $106 million to deal with the refugees. When the summer offensive started in June the world body asked for an additional $312 million. Both groups were not getting enough money to begin with to deal with the existing internal refugees and now it is dealing with the current tidal wave.

Iraq has suffered from decades of refugees. The renewed insurgency is just adding the latest wave. Central Iraq is caught in on going fighting, and the Islamic State’s control of places like Mosul is causing more people to flee. The battle with militants is likely to last for years and that means these people will be homeless for the long run. International organizations like the IOM and U.N. did not have enough money to deal with the existing IDPs and are now faced with the current crisis. Not many people are that concerned with Iraq anymore, which means donations to deal with the displaced may be hard to come by. That puts added pressure upon the communities the refugees are staying with. Eventually these people will have to find jobs, schools for their children, etc., and integrate into their new provinces, because they will not be able to return home any time soon.

Alsumaria, “The displacement of nearly 200 families from the neighborhood South Jalawla controlled by “Daash,”” 7/16/14

Email ThisBlogThis!Share to TwitterShare to FacebookShare to Pinterest
Labels: Refugees