These are the most complete security statistics collected so far by Musings On Iraq. They cover January to July 2016. The main sources for these numbers are 41 newspapers that are read each day. Those are a mix of Iraqi, western and Arab media outlets. Each security incident mentioned is noted in an Excel spreadsheet with date, location, type of attack, casualties, article title, and link. Additional information comes from Airwars, which covers Coalition air strikes on Iraq and Syria, the United Nations monthly security reports, and Iraq Body Count.

Security incidents are the best barometer of violence in Iraq. That’s because the government is suppressing its losses. In most major clashes with the Islamic State the authorities release no numbers for casualties. Another indicator is the fact that the number of wounded should be two to five times higher than the number of dead, yet almost every month those figures are either roughly equal or there are more killed than injured. In total, there have been 12,673 dead and 18,350 from January to July. While not all attacks are reported, their coverage is far more consistent than casualty figures.

What the numbers reveal is that security is improving across the country. There was a slight increase in attacks during the Islamic State’s spring offensive, but the trend is going downwards. In January 2016 there were an average of 23.3 incidents per day. That went down to 22.6 in February, 21.9 in March, 20.9 in April, 21.6 in May, 21.0 in June, and 17.0 in July.

Broken down by province, incidents have declined in five out of six major battlefields. Out of Anbar, Baghdad, Diyala, Kirkuk, Ninewa and Salahaddin only Diyala has seen violence go up in the first seven months of the year. In January there were an average of 1.9 incidents per day in that governorate, which went down to 1.4 per day in March and April, but then climbed back up to 2.0 in July. Kirkuk also saw a slight uptick in the summer from 1.1 in June to 1.4 in July, but that was still below figures seen at the start of the year when there were 2.0 in February, 1.5 in March, 1.6 in April, and 1.9 in May. Otherwise, the numbers have gone down more dramatically in the other provinces. Baghdad for instance, went from 11.6 incidents per day in January and February to 8.9 in June and July.

Two major factors contributed to the downtown. First, after Fallujah was freed there were no more major government campaigns going on, which invoke a large number of counter attacks by the Islamic State. That’s best shown in Anbar where incidents went from 3.6 per day in January to just 1.2 by July due to the liberation of Fallujah. Second, the militants spring offensive ended in the summer and there has been a downtown in their operations since then. Unfortunately, IS’s attacks are cyclical and there has already been an uptick in violence in Baghdad in August. Still, the group is losing ground and re-grouping so security will continue to improve for the rest of the year. 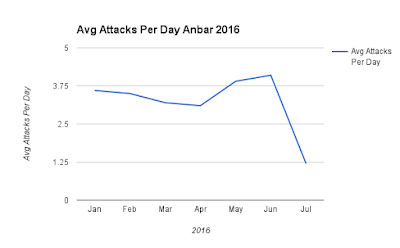 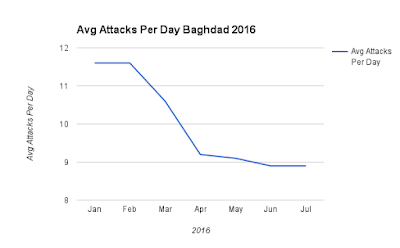 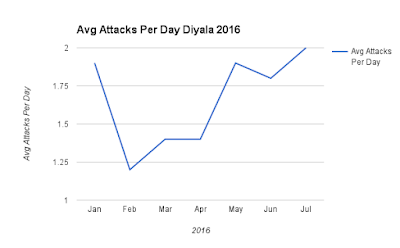 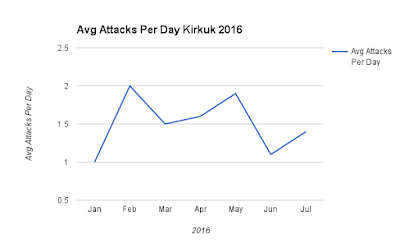 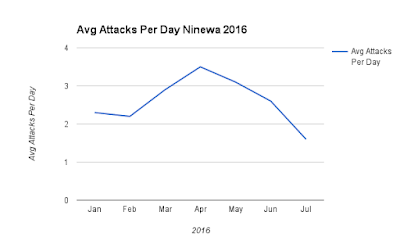 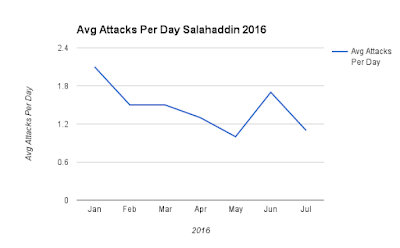 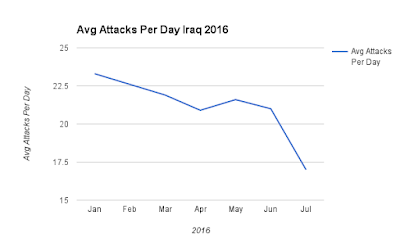