This is the second article in a series reviewing security in Iraq. These are based upon the most complete numbers collected by Musings On Iraq so far. The basis for these figures are 41 newspapers, which are read each day. These are a collection of Iraq, western, and Arab media outlets. In addition, Airwars, which documents U.S.-led Coalition air strikes in Iraq and Syria, Iraq Body Count, and the United Nations are also consulted. This article covers the fourth quarter of 2015 when there was the last great surge of violence in Iraq.

From October to December 2015 there was a large increase in reported security incidents in Iraq. In October there were 598 incidents, 539 in November, before jumping to 659 in December. That would average out to 19.2 per day, 17.9 and 21.2 for those three months. This surge in violence was due to two factors. First, the Islamic State launched a huge terrorist campaign in Baghdad in the winter. Second, the Kurds launched an operation to free Sinjar in western Ninewa setting off heavy fighting there.

As incidents went up so did casualties. In October there were 1,190 deaths, going up to 1,521 by December. The number wounded actually went down from 1,567 in October to 1,430. In total, there were 1,796 incidents reported leading to 3,927 fatalities, and 4,470 injured for the last quarter of the year. The close alignment between dead and wounded was another sign that Iraqi authorities were not divulging their losses. The number of injured is regularly 2-4 times higher than deaths, but in most major clashes casualties are rarely mentioned, and figures have never been released for any of the large campaigns to free territory since the war started in June 2014.

During the last quarter of 2015 Baghdad, Diyala, Kirkuk and Ninewa saw rising violence, while in Anbar the number of attacks was flat, and going down in Salahaddin. As the Islamic State was losing more territory in the country it came to focus upon the capital. There, incidents went from 8.4 in October to 10.8 by December. Similarly, IS began picking up its operations in Diyala at the same time. In November there was a low of just 0.7 incidents per day, which then rose to 1.9 by January 2016. Kirkuk had more fluctuations, but the trend was still upward starting in November when there were 0.5 incidents per day going up to 2.0 by February. Ninewa is different from Iraq’s other provinces because incidents there are just as likely IS executions as clashes with the Iraqi forces. In November however, the Peshmerga started an operation to free Sinjar, which set off a large number of counterattacks leading security figures to rise sharply from 1.6 in October to 3.9 by December. Anbar was one exception to this trend with incidents being flat during the quarter with 2.9 in October, 2.8 in November, and 2.8 in December before going upwards with the liberations of Ramadi and Fallujah leading an uptick in 2016. In Salahaddin things were heading downwards after Baiji was freed in September with incidents going from 3.1 in October to 1.5 by December. This was the Islamic State’s last big surge in attacks as in 2016 overall incidents would steadily decline even with its spring offensive. 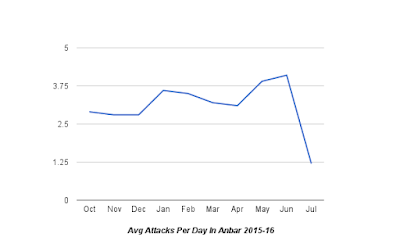 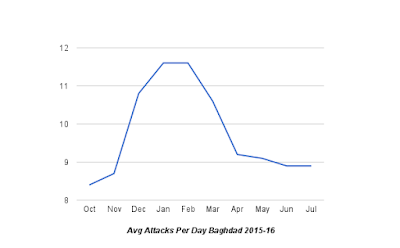 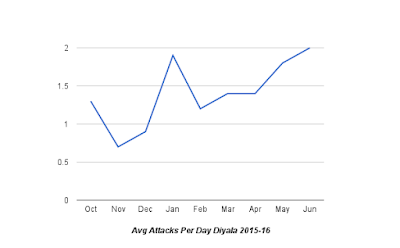 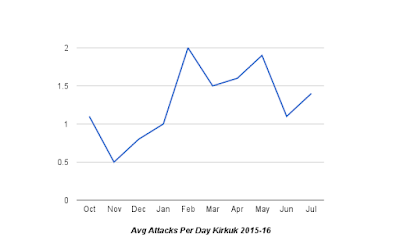 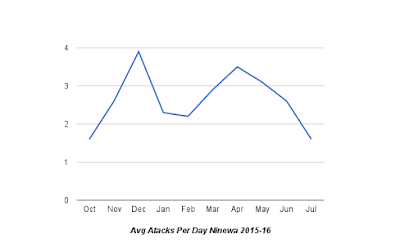 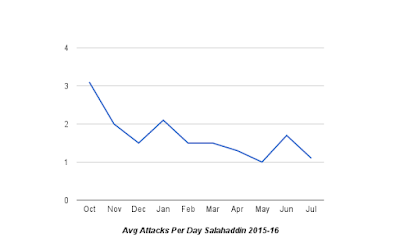 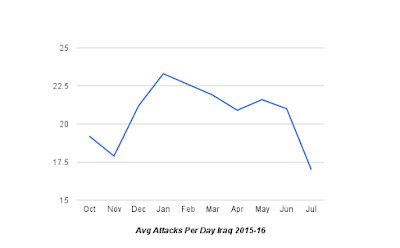