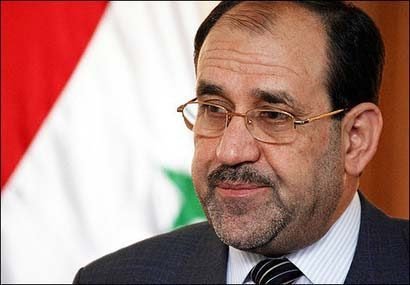 Prime Minister Nouri al-Maliki is coming under increasing pressure by his new allies in the Sadrist-Supreme Council led Iraqi National Alliance (INA). On May 4, 2010 the merger between Maliki’s State of Law and the National Alliance was announced. Since then very little has happened as Maliki is intent on returning to the premiership, which is opposed by the Sadrists who have the largest number of seats within the INA. Even the Supreme Islamic Iraqi Council (SIIC) is expressing increasing reservations about Maliki’s candidacy. That has led to extended negotiations amongst the major Shiite parties, and general deadlock on forming a new government.

The two sides put together a “Wise Men Committee” with representatives of each party that is supposed to pick the new coalition’s nominee for prime minister. The committee has done little since there has been endless arguments about how many seats each party will get, and how many votes within the committee are necessary to select a candidate.

Each party also has its own nominee as well. State of Law put forth Maliki, the Sadrists have nominated former Prime Minister Ibrahim al-Jaafari that won a Sadrist referendum after the March election, while the SIIC has two candidates, Vice President Adel Abdul Mahdi and Finance Minister Bayan Jabr. The Sadrists have repeatedly said that they are opposed to Maliki returning as prime minister because he has used the security forces against them, and still holds hundreds of their followers in prisons. They could eventually change their mind, but at a very heavy price. The press has reported that they want some of the major service ministries such as Health, Labor, or Transportation, as well as the more powerful Foreign, Interior, Oil or Finance ministries, and the deputy speaker of parliament. The Supreme Council is also afraid that they will be sidelined by the larger Sadrist faction within the INA and State of Law, which means their two nominees will have no chance of gaining power. That has led to more deadlock amongst the Shiite parties, and dragged out putting together the Wise Men Committee.

Finally, the National Alliance is afraid of Maliki’s power, especially his autocratic tendencies. As a result, they have put forward a number of proposals that would severely limit the prime minister’s authority. One idea is to appoint three deputy prime ministers, each of which would be in charge of a specific government duty: security, finances, and services. Another is to have a security committee made up of all the major Iraqi parties that would control security in the entire country. Both recommendations would rob any prime minister of his main powers over the country. If Maliki were to agree to the National Alliance’s proposals in return for their backing, it would make him little more than a figurehead leader, which is probably what the Sadrists and SIIC are hoping for. Either that or they want to impose such strict limits on him that he will eventually give up his plans to return to the premiership.

Despite Iraq having held its elections on March 7, its Shiite parties are no closer to agreeing today as then on a new government. The only thing they have in common is that they want to hold onto the premiership. That was the main reason why State of Law and the National Alliance joined together, to prevent Allawi from returning to power. As long as the National Alliance is opposed to Maliki as well however, it doesn’t appear that the two sides can come to any agreement. In fact, Maliki recently told the press that there would be no new ruling coalition in the next two months. It doesn’t look like the two sides will find consensus until either Maliki accepts giving up much of his power as prime minister, or he steps aside. As Maliki points out, that disagreement will take months to resolve.

Knights, Michael and Ali, Ahmed, “Everyone and No One: Iraq Heads toward a Unity Government,” Washington Institute for Near East Policy, 5/26/10

You know, I am not at all pleased that the Sadrists and Supreme Council are putting forth people who should be standing in a dock in the Hague as their candidates. Jafaari? Jabir? Seriously? Are they trying to jab a stick in the eye of Iraq's Sunnis?

For the SIIC those are their leaders. They've tried to push Mahdi for premier since the get go and Jabr is part of the old guard leadership. He was a commander in the Badr Brigade. Jaafari since he quit Dawa doesn't have much of a base so he's cozied up to the Sadrists for support and won their referendum as a result. I don't think many of them have a chance though. Maybe Jaafari has an outside chance.

I should clarify that when I said that the SIIC had been pushing Mahdi as prime minister all along, I meant since 2005 when Iraq had its first post-invasion elections.