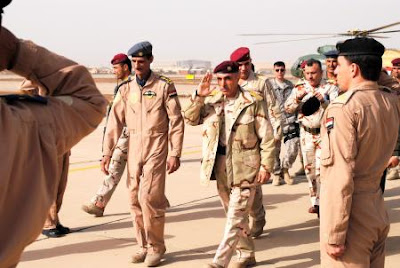 An Iraqi paper reported that the Army Chief of Staff Gen. Zebari (saluting in the center) is unhappy with Premier Maliki encroaching upon his authority (DVIDS)
A source in the prime minister’s office told the National Iraqi News Agency that the head of country’s military, General Babaker Zebari, was thinking of resigning because Nouri al-Maliki was attempting to usurp his power. Currently, the premier is the acting Defense and Interior Minister as he argues with his political rivals over finishing off the cabinet. That has given him the opportunity to increase his hold on the security forces, something he started to do years ago.

In November 2010, the National Coalition made up of Maliki’s State of Law, the Sadrists, and the Supreme Islamic Iraqi Council and Iyad Allawi’s Iraqi National Movement signed off on the Irbil agreement orchestrated by Kurdistan’s President Massoud Barzani. Under that arrangement, the National Coalition was to get the Interior and National Security ministries, and the National Movement was to name the Defense Minister. Until then however, Maliki was to control all three. Since then, Maliki named his National Security Adviser Faleh al-Fayadh as the acting National Security Minister, and appointed another one of his allies, Adnan Asadi as the deputy Interior Minister. That leaves the prime minister still as the Interior and Defense Minister until he works out his differences with Allawi.

What that has meant is that Maliki has been able to place his operatives further into the security bureaucracy, something that he’s been doing since he first came to office in 2005. The prime minister’s Dawa party, which is the base of his State of Law list, has always been a rather small organization that lacked a popular base. (1) To make up for that, it has tried to take over the offices of the state by placing as many of its followers within it as possible. Nibras Kazimi of the Hudson Institute once compared this process to the Leninist model of infiltrating the government. On top of that, the premier has tried to gain direct control of the security forces. There are operation commands in the most important provinces of the country, which answer to Maliki, not the military leadership. He also has the Counter Terrorism Unit and the Baghdad Brigade that are not part of the Defense Ministry, but rather his prime minister’s office, and he recently dismissed 600 officers for political reasons. These types of moves are likely the ones behind any discontent by General Zebari. He has been in office since 2005, and for almost all of that period, he has had to deal with Maliki moving in on his turf.

Iraq is full of baseless rumors, and the article in the National Iraqi News Agency was from an unnamed source. That means it cannot be taken at face value. At the same time, there is plenty of history of Maliki encroaching upon the security sector, and now that he is temporarily in charge of all the important ministries there’s no reason to believe he is not trying to grab more power. These moves can only annoy career officers such as General Zebari who see their authority being encroached upon by the prime minister. Given the relatively young age of the Iraqi state it can be expected that institutions are still weak, and interference by politicians would be common. How the security forces are able to maintain their integrity against leaders like Maliki is of outmost importance because it could determine whether the country continues to develop as a democracy or slips into becoming an autocracy.

National Iraqi News Agency, “Babacar Zebari, intend to resign as his power taking away as Military Chief of Staff by al-Maliki,” 7/21/11

I'm going to have to follow your blog, buddy, because you have some interesting insight here. I recommend that you update your template to the latest templates though; I also recommend that you lose some of these outdated widgets and use what's given to you by default. People have the options to email and social network with your blog as a default with the new templates. You and I are alike due to we both are conscious aware on the issues of the world but we just express it differently. You're more of a journalist I'm more of a commentator. Check out my blog, bro.

Thanks for the kind comments. I have looked at the new templates again and again, and just not found one that really appeals to me. I like the patterns on the one that I use.

Very Cool!! CONGRATULATIONS on being selected as a Blog of Note!!!

Have you considered stretching the entire blog width? This is what needs to be done if you want to be taken seriously as a journalist.

You need to know html to change the width of the blog with this template. I don't know html code.

It's good. They needs to views theor point of. If you can understand what we say then just fine.