Partial figures have just been released for Iraq’s June 2011 oil production. They show that the country has reached another post-2003 high in exports, but that dropping oil prices are decreasing its profits. 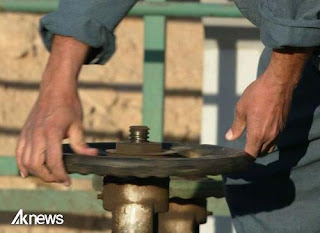 Last month, Iraq’s exports rose for the third straight month. In June, Iraq exported an average of 2.27 million barrels of oil per day. That was the most since 2003. In April, it exported 2.14 million barrels, and then 2.22 million in May. For all of this year Iraq has been able to ship out more than 2 million barrels a day to foreign markets, another post-invasion first. That doesn’t mean they have constantly grown each month however. In February, Iraq exported 2.20 million barrels for example, before dropping to 2.15 million in March. The reason for the up and down pattern is that exports are shaped by a number of factors such as weather in the port of Basra that can limit boats dockings, maintenance on pipelines that can temporarily shut them down, and attacks, which are still common along the northern pipeline. Most importantly, the nation’s infrastructure is extremely limited due to years of wars and sanctions. That means it is unlikely to see any large increase in production until new pipelines, ports, etc. are built, the first of which isn’t due until the end of the year.

As usual, the south was the mainstay of the country’s petroleum industry. Basra exported an average of 1.727 million barrels, slightly up from the 1.725 million in May. The northern pipeline to Turkey shipped an average of 537,000 barrels, far above the 490,000 from the previous month. 10,000 barrels was also trucked to Jordan per day.

Unfortunately for Iraq, the increased production did not pay off as much as it could. After hitting $114.26 a barrel in April, prices for Iraqi crude have dropped to $108 in May, and $105 in June. In May, that didn’t have an affect when Iraq earned $7.4 million. In June however, profits went down to $7.1 billion. After consistently rising due to the unrest in the Arab world, the international oil market is finally cooling off. Prices are still over $100 a barrel, which means Iraq will still make large profits, but the record money they’ve been bringing in will eventually end even if production stays high.

Overall, three factors have benefited Iraq’s Oil Ministry this year. First, foreign oil companies are ramping up production at over a dozen oil fields they won contracts for in 2009. Second, Baghdad has reached an agreement with Kurdistan to allow it to export once again, bringing on line two more fields for foreign sales. Third, world prices for petroleum have dramatically gone up due to the Arab Spring. Each of these also pose possible challenges for the country. As stated before, exports can only grow so much due to the lack of infrastructure. Iraq is currently working on new ports and pipelines, but there are questions about how much capacity it can actually add. The problems with Kurdistan are not completely worked out as the Finance Ministry is only paying companies there for their costs, not profits, and they will not accept that indefinitely. Finally, international prices for a barrel of crude are already declining, which means that once Iraq’s new infrastructure is ready to operate, it may miss out on this boom. Iraq therefore needs to produce as much as it can right now to bring in as much money as possible, because the market may not be as favorable in the future.