Since March 2013, the Kurdish Coalition had been boycotting the central government. This was the result of on-going disputes over the 2013 budget, and the country’s oil policy. Recently the two sides came to a new agreement that allowed the Kurdish ministers and lawmakers to return to Baghdad. The deal was roundly criticized, because it gained no immediate benefits for the Kurdistan Regional Government (KRG). The reason why the Kurdish list agreed to return to office with none of its demands met was that it was gaining nothing from its absence, and simply wanted a face saving device to end its boycott. 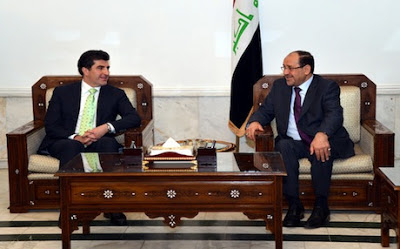 In May 2013, Kurdistan announced that it had come to a new deal with Baghdad. This came after several delegations from the two sides met including one from the National Alliance in April that went to the KRG, followed by Kurdish Premier Nechirvan Barzani meeting with members of Prime Minister Nouri al-Maliki’s State of Law in Iran, which allegedly played a mediating role, and then a meeting between the two premiers in Baghdad. That resulted in a seven-point agreement that included drafting a bill to compensate victims of Saddam Hussein’s Anfal campaign, the creation of a joint security committee between Irbil and Baghdad, another committee to deal with security in the disputed areas that includes the Tigris Operations Command, following through with the draft law made by President Jalal Talabani that would redraw the country’s provincial borders, create a third committee to look into judicial, custom, travel, and border crossing issues, amend the 2013 budget, and work on passing the hydrocarbon legislation. These are all long-standing disputes that Kurdistan has had with the central government. Maliki has recently been pushing on several of these fronts as well to gain support of Sunnis over the disputed territories for instance, and to hinder the KRG’s independent oil policy. The two sides have agreed to make-up for now. It could also lead to a new deal that would allow the Kurds to export through the northern pipeline to Turkey again.

The Kurdish Coalition started boycotting the central government in March 2013 over the new budget. It was passed when the list was not in parliament, and only included a few million for the compensation of oil companies operating in Kurdistan, instead of the billions that it had requested. The Kurds then withdrew their ministers and lawmakers in protest. This caused divisions between the Kurdish parties with the Patriotic Union of Kurdistan, the Change List, and the Kurdistan Islamic Union all voicing their criticism of the decision, which was led by President Massoud Barzani’s Kurdistan Democratic Party (KDP). The central and regional governments have been arguing over who has control over the country’s petroleum policy for years. The Kurds believe they have the right to develop and export oil on their own, while Baghdad demands that it have control. This has led to the central government calling the KRG’s oil deals illegal, and a series of short-term export deals, which constantly break down. That boiled over into the 2013 budget where Maliki refused to give into the Kurdish Coalition’s demands, and caused their subsequent boycott.

The new agreement has been widely criticized by Kurdish politicians and analysts. A member of the Kurdish Coalition said that he didn’t expect much from the new deal. Another Kurdish parliamentarian was quoted as saying that this was just a way for Maliki to relieve some pressure on himself, and that the KRG should have pushed Maliki to implement the 2010 agreement instead of coming up with a new one. In return for the Kurds’ support for the premier’s second term after the 2010 elections, Maliki agreed to their 19-points, which included passage of the oil law, resolving the disputed territories, amongst other issues. Tamim’s governor expressed skepticism that Baghdad would follow through with the latest agreement, and said that a deadline should have been given to the prime minister to implement the deal, while the Change List’s public relations department stated that the negotiations were only made to renew exports, and help out the oil companies in the region. Finally, the head of the Iraqi Group for Strategic Studies told Reuters that he was sure that the new deal would breakdown as soon as Maliki felt like it. With so many questions regarding the relationship between Baghdad and Irbil it raises the issue of why the Kurdish Coalition would go along with a new agreement. The fact was the boycott was achieving nothing. The Kurdish list has neither the ministers nor lawmakers to stop the government from doing its work. Maliki for example, was going about his business, and even put the Kurdish ministers on leave, and talked about naming their temporary replacements. The whole point of the talks then was to find a face saving means for the Kurds to return to the government.

Both the central and regional governments had reason to come to terms. The Kurdish Coalition was looking for a way to go back to Baghdad without appearing to have given in to the prime minister. Maliki on the other hand, has been facing pressure from the Sunni protests, and wanted to take care of the Kurdish dispute, so that he could focus upon the demonstrations. In the short-term the Kurds may be able to officially export again if further talks take place, but in the long-term this is just one of many agreements, which will likely breakdown eventually. The differences between the two run deep, and neither has been willing to hold any meaningful discussions about resolving them. This is a shortcoming of the current political leadership, which sees everything in zero sum terms, and is therefore unwilling to make any worthwhile compromises as a result.