The ninth day of the Mosul operation was marked by a few new towns taken by the joint Iraqi forces, but really the main story was about the mass executions by the Islamic State. 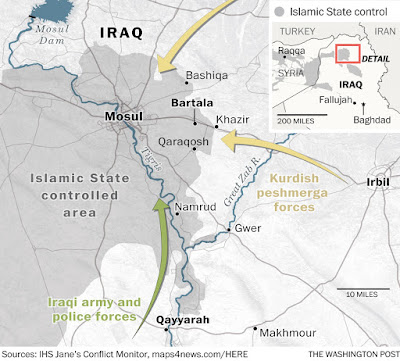 First, there was little movement by the joint forces. The Peshmerga freed three towns including Batnaya in the northeast, which they claimed to have cleared five days ago. The Kurds announced that they were almost done with their role in the campaign, so less news can be expected on their fronts. The Golden Division liberated one village in the east. The Federal police also freed up to 200 families that had been snatched by the Islamic State from three towns south of Mosul. They were likely used as human shields.

Most of the news on October 25 was about the Islamic State. Reports had them executing 15 in Safina, 60 in Hamam al-Alil, and 78 in Mosul. The United Nations has also received further stories of other mass killings. Those included 6 killed in Rufaila, 50 former police bodies being found, and another 70 dead civilians in Tal Nasr that occurred over the last week. IS was said to be killing people as they were forced out of areas, and also executing others after they had been used as human shields to protect insurgents as they fled in the face of the joint forces. Similar stories can be expected in the future.

In Mosul IS continues to face difficulties. First, it has shifted most of its families and fighters to the right bank of the city, and planted explosives on all the bridges connecting that side with the other side of the city. The press has said that IS only has 2,000-5,000 fighters to protect this metropolis limiting their defensive options. It looks like IS intends to put up a tough fight in the surrounding towns, but when Mosul itself is reached it will carry out delaying attacks and then fall back to the right bank to put up its last stand, knocking out the bridges to slow the Iraqi forces.

Finally, Iraq’s Displacement Ministry noted that 3,802 had been displaced in the last few days. Camps have been built in the area with a capacity for 300,000 people. The question is if these are in the right locations. For example, many were built in the north and east, but lots of people have gone west where there is no fighting with some even heading into Syria. A parliamentarian from the displacement committee also criticized the government saying that it was not adequately prepared because of corruption stealing money meant for supplies.

Al Maalomah, "Foiled Daesh attack south of Mosul," 10/25/16
- "Learned the importance of Kokjla region after being storemd by counterterrorism," 10/25/16