The next phase of the Mosul operation opened on October 28 when the Hashd opened the western front pushing towards Tal Afar. The United Nations also documented thousands of people being kidnapped by the Islamic State to be used as human shields. The insurgents also continued their wholesale slaughter of civilians. Finally, Turkey issued more statements attempting to assert themselves into the campaign. 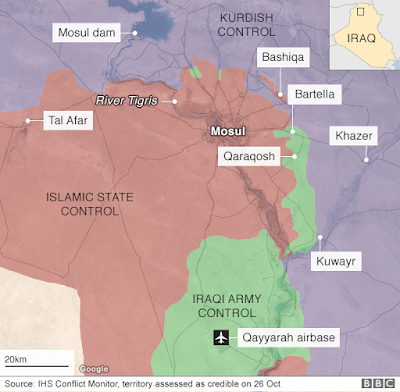 The Hashd finally entered the battle on a large scale on October 28. They took two towns west of Mosul heading towards Tal Afar. Up to this point the Islamic State’s corridor to Syria has remained opened. Now the Hashd and Federal Police are going to try to cut that off.

The Federal Police in the south freed two villages as well. Otherwise there was no other news by the Iraqi and Kurdish forces. A pause has been coming as the forces solidify their frontlines before making their next push onto Mosul itself.

As the Islamic State has been losing territory it has taken thousands of people with them to be used as hostages. The United Nations recorded around 5,370 families, approximately 60,000 people who had been forced to retreat with the militants. 160 came form the Qayara district, 150 from Hamam al-Alil area, and 2,210 from the Nimrud district. These people have been taken to Hamam Al-Alil and Mosul to be used as human shields. Those that have not gone with IS have been killed.

There were more reports of mass executions by IS. The U.N. had 232 former members of the security forces killed in the first week of the operation. On October 27 18 were killed in Shura and 22 in Mosul, with another 41 outside Mosul on October 28.

IS announced that it had sent in an extra unit to Mosul to bolster the defenses. IS media said that the Al-Sham battalion came form Raqqa to the city. A resident recounted that new fighters had come from Syria as well.

Finally, Turkey continued to claim that it was taking part in the campaign. Ankara’s Foreign Minister Mouloud Jawish Oglu in a press conference stated that 3,000 Iraqis that it had trained were taking part in the Mosul operation. That was probably a reference to ex-Governor Atheel Nujafi’s Hashd al-Watani that has not fact been involved so far. He went on to claim that Turkish planes were carrying out missions, and that his country was one of the most involved in the fight against IS. These statements and others have constantly inflamed Iraqis and the government who have demanded that Turkey remove its troops from Ninewa and stop trying to interfere. President Recep Erdogan however continues to ignore Baghdad.

NINA, "Daesh executed 18 young residents of the Shura district during the process of storming south of Mosul," 10/27/16
- “Turkish Foreign Ministry: Three thousand Iraqi fighters trained by us fighting against Daesh,” 10/27/16

UN Office of the High Commissioner for Human Rights,” Battle for Mosul: ISIL forces thousands of civilians from their homes and executes hundreds,” 10/28/16