Each week of September 2016 saw the number of security incidents steadily increase. One reason was that there were no government operations going on at the start of the month, which evoke Islamic State counter attacks. Another factor was a large jump in incidents in Baghdad at the end of the month. Still, by the time it was over the levels of violence were largely unchanged from August to September. 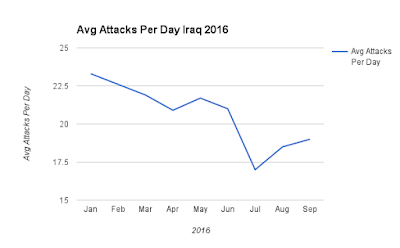 Those incidents led to 1,203 killed, the lowest figure recorded so far this year, and 1,602 wounded. In comparison, the United Nations had 1,003 dead and Iraq Body Count had 928.

The dead consisted of 8 Sahwa, 18 Peshmerga, 34 members of the Kurdistan Workers’ Party (PKK), 76 Hashd, 103 members of the Iraqi Security Forces (ISF), and 964 Civilians. 1 PKK, 12 Sahwa, 25 Peshmerga, 56 Hashd, and 1,319 civilians were wounded. Baghdad was the deadliest governorate with 454, followed by 247 in Anbar, 221 in Ninewa, 141 in Salahaddin, 59 in Kirkuk, 38 in Diyala, 34 in Kurdistan, 6 in Basra, 2 in Babil, and 1 in Muthanna. The real numbers are always higher than what gets reported in the press due to under reporting outside the capital, and government censorship of its losses fighting the Islamic State.

Almost all of the violence in Anbar took place in the center of the province with some incidents in the far west heading towards Jordan. For example, a suicide car bomb hit a checkpoint in Rutba. At the end of the month, the Iraqi forces began new operations to clear out areas around Ramadi, which provoked IS counter attacks. A mass grave with 70 people killed by the militants was found in Baghdadi at the start of September. Two air strikes were also blamed for killing 10 and wounding 20. In total, there were 54 incidents leading to 247 dead and 50 wounded. Overall, violence has seen a huge drop since the insurgent’s spring offensive ended. 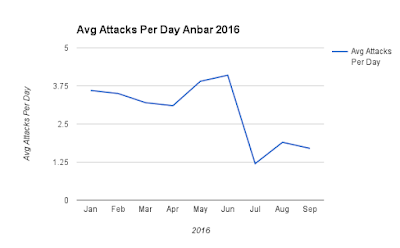 The capital province saw a huge surge in incidents in the second half of the month. During the last full week there were 97 incidents, the most ever recorded by Musings On Iraq. The Islamic State has been escalating its operations in Baghdad after a four-month lull. That included two car bombs and 4 suicide bombers with another 6 suicide bombers killed, and two vehicle bombs dismantled. One of those attacks left 100 casualties. The real killer was the endless series of IEDs and sticky bombs with 178 of both during the month. The north and south saw the most activity with IS active in the outer towns such as Arab Jabour, Taji and Tarmiya, which it uses to launch operations into the city itself. There was also plenty of crime, along with vigilantes and militias leaving dead bodies behind. In total, the capital accounted for 324 incidents, 454 dead, and 1,187 wounded. 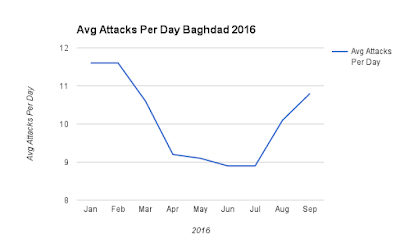 Islamic State activity in Diyala saw a large drop in the last two months. In September there were 37 incidents, 38 fatalities, and 42 injured. Most were small attacks like IEDs and shootings, but the militants have been carrying out a steady stream of mass casualty bombings in the governorate as well. During the month there was one suicide bomber, one car bomb, a suicide bomber was arrested, and two suicide car bombs destroyed. 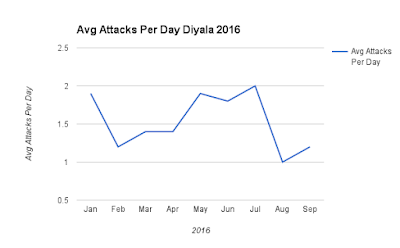 Recently, many of the incidents reported in Kirkuk have been displaced people being killed by bombs and gunfire as they attempted to flee the Islamic State. The organization still controls the Hawija district, and dozens of people have recently been escaping, but at a cost. During the month, 34 died and 40 were wounded as a result. In total, there were 33 incidents, 59 dead, and 50 injured. 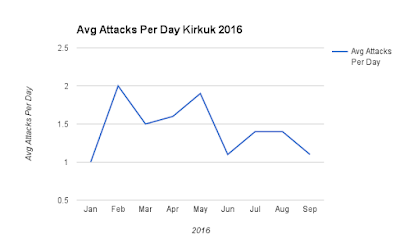 Turkey claimed that it killed 34 PKK members and wounded one more in two air strikes upon northern Kurdistan. Ankara has been bombing and firing artillery at the area every few days, but casualties are rarely reported.

Incidents have been on the decline in Ninewa. There were 54 in September with 221 killed, and 83 wounded. Those came from a mix of attacks upon the Iraqi army in the south, which has been advancing slowly towards Mosul, and the Peshmerga who hold a line to the north. The Islamic State also executed 149 people, mostly in the Mosul area. Three Coalition air strikes were blamed for 22 dead and 54 injured. 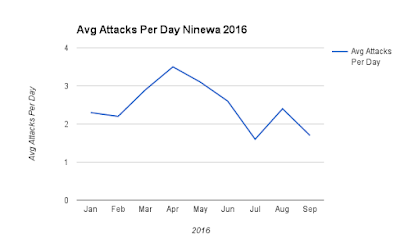 Salahaddin saw a slight surge in attacks due to the government finally taking on the Shirqat district in the north. That led to a large number of attacks by the Islamic State. The group also attempted to assassinate two leading officials in Tikrit with suicide bombings, showing that the insurgents had re-infiltrated the capital. Finally, 153 casualties from a large gun battle between the Iraqi forces and insurgents was reported at the start of the month. That rarely happens, but a local tribe was involved and mentioned its losses to the press. By the end of the month there were 47 incidents costing the lives of 141 people and injuring another 180. 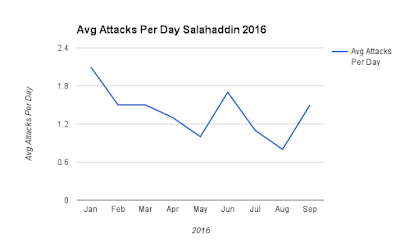 There were a total of 17 successful car bombs in September. Those killed 90 and wounded 174. There was 1 in Anbar, 1 in Diyala, 2 in Baghdad, 3 in Ninewa, and 10 in Salahaddin. That was the most vehicle bombs since 29 in May. The Iraqi forces claimed they destroyed another 68 with 2 in Baghdad, 2 in Diyala, 10 in Anbar, 23 in Ninewa, and 31 in Salahaddin. The government regularly exaggerates those figures as part of its war propaganda. 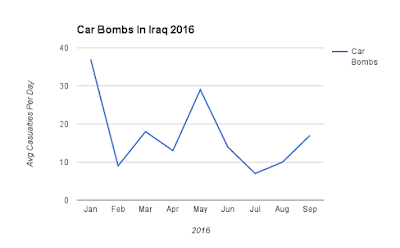