On the third day of the Mosul campaign there was a decided slowdown in the pace of events. That was mostly by design as the Peshmerga halted their operations, and some of the Iraqi Security Forces (ISF) were to shift from the south to the east to take off from where the Kurds stopped. At the same time, IS was putting up a tougher defense in the south. 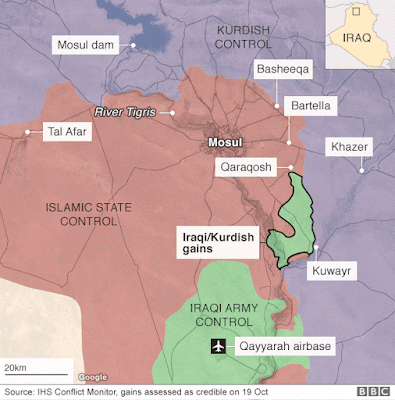 The last two days were a period of pause and transition in the effort to re-take Mosul. The Peshmerga halted on October 18 along the Irbil-Mosul road in the Khazir district as part of the battle plan. They are preparing to attack the Bashiqa district. The ISF in Gwar to the south of the Kurds are supposed to move north and take up the advance from the Peshmerga in Khazir and attack Bartella.

South of Mosul the ISF continued to move forward, but at a slower rate than before, and faced their first setback. Four new towns were freed. At the same time, the Islamic State re-took two towns, Kani Hamran and Abassi, that were freed the day before by the Iraqi 9th and 15th Army Divisions. The ISF was able to move back into the former and was attacking the latter. Another town, Qaraqosh that was declared liberated yesterday also had fighting continue on October 19. The insurgents brought in civilians to act as human shields there.

The Islamic State was active in other areas as well. It carried out a large assault in the Sinjar district in western Ninewa, perhaps in an attempt to draw away Peshmerga forces, but it was turned back. They also counter attacked in two small towns south of Mosul with car and truck bombs that were destroyed. Overall, those assaults killed two soldiers, and wounded 4 Peshmerga and 25 soldiers. In Azba and al-Hud 24 bodies of people executed by the militants were discovered.

The U.S.-led Coalition increased their support on the third day. The Commander of U.S. and Coalition forces in Iraq General Gary Voelsky told the press that American Apache helicopters were attacking IS positions in night operations. No other details were revealed such as where this was going on.

One of the big fears of this operation is that it could lead to a massive displacement and humanitarian disaster, but so far there has been a dispute about what impact the fighting has had so far. Save the Children claimed that 5,000 people crossed from Ninewa into Syria in the last ten days and entered the al-Hol refugee camp. The U.N. disagreed with that figure saying that some of those new arrivals were Syrians. It reported that 912 people had arrived in al-Hol in a 24 hour period.

Finally, in IS controlled areas there were more reports of killings and preparation for the fall of Mosul. Within the city Iraq Oil Report said that the group was burning documents so that they could not be captured. A person also claimed to have seen up to 100 men burned to death by the militants in the town of Tilool Nasir.

Shafaq News, "Found eight bodies including a former army officer executed by Daesh before withdrawing from the village of Al Hud," 10/19/16