After Liberation Of Iraq’s Baiji District An Uncertain Peace 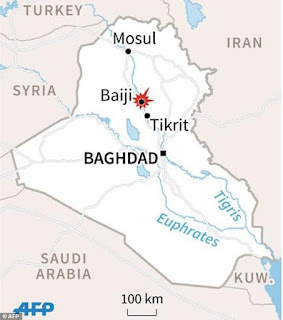 The Iraqi Human Rights Observatory said that thousands of people have not been able to return to their homes in the Baiji district of eastern Salahaddin. It cited four main reasons: over 20,000 homes are destroyed or damaged, there is a lack of work, there is apprehension about the security situation, and Hashd forces are refusing to let people back. This area is symbolic of many other parts of central Iraq that are suffering from the aftermath of the war with the Islamic State.

There were two waves of displacement from Baiji. The first was when IS took over most of the district in 2014 and then when the government liberated it from 2014-15. Afterward Kataib Hezbollah and Asaib Ahl Al-Haq were blamed for destroying property and looting. Al Mada for example reported in November 2014 that Hashd units were burning and blowing up homes, and attacking civilians. The United Nations received stories that the Hashd destroyed buildings, a mosque and a market in Baiji in 2015. Local officials interviewed by researchers from the Global Public Policy Institute said that 80% of the infrastructure was damaged or destroyed, some of which happened after Baiji was freed. Asaib Ahl Al-Haq, Badr, Kataib Hezbollah, and Kataib Imam Ali for example stole equipment from the Baiji refinery and sold it off. Some even had the audacity to offer some of the equipment back to the Oil Ministry. The Hashd also detained and abused people fleeing the area and then stopped IDPs from returning. As a result, by March 2018 only around 25% of the population was back.

Similar events have taken place in other parts of the country. Jurf al-Sakhr in Babil was completely emptied of people when it was cleared of IS, and the government has refused to allow anyone back since then. The Peshmerga destroyed villages in southern Kirkuk, while tribal Hashd blew up hundreds of homes in Salahaddin. Damaged property and fear of retaliation by security forces and others has been cited in surveys of IDPs as reasons for not returning. Areas with the heaviest property damage also deters people from going back. Since rebuilding is mostly being left to provincial authorities, the U.N. and NGOs and Baghdad only has nominal control of Hashd groups problems like those in Baiji and other areas are likely to persist into the foreseeable future. The Iraqi government won the war with the Islamic State, but it is finding it hard to deal with the peace.

Tasrebat, “Oil Minister: Those who stole equipment from Baiji refinery contacted the ministry to sell it again,” 1/21/19