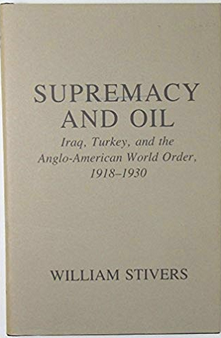 William Stivers’ book is about the negotiations between England, the United States and Turkey after World War I that led to the creation of Iraq. England came out a victor in the war, but was broke and its army was overextended. It had to decide what to do with the former Ottoman provinces that would become Iraq. It was hoping to bring the United States into the Middle East to help share the burden, but Washington was only interested in expanding its business in the region, while the British footed the bill. Finally, Turkey laid claim to Mosul province, which threatened England’s plans. It’s these different agendas which Supreme And Oil does such a good job explaining.


London was originally only interested in part of what would become Iraq, but that quickly changed after World War I ended. England’s main concern in the Middle East was to ensure the route to India both by land and sea was secure, along with its oil interests in Persia. That meant controlling the Persian Gulf and Basra province were important. During World War I England took not only Basra but Baghdad and Mosul provinces as well. That led the Lloyd George government to change its opinion and decide to keep all three areas. It would apply its imperialist model of allowing local rule, finding buffer states to protect its new holdings from its rivals, and seek to have the territory fund itself. This posed major problems however because England was expanding far past what it had initially planned. Its military was overstretched across the globe, and it was heavily in debt raising questions about whether it could hold Iraq or not. Those issues immediately came to the fore.

England ran into all kinds of problems implementing its plans in Iraq. First, the British entered Baghdad claiming they would not be occupiers and gave hope to Arab nationalist dreams of independent states in the wake of the Ottomans. When neither of those were followed through with Iraqi tribes rose up in the 1920 Revolt. Second, Mustafa Kemal Ataturk rallied the Turks after World War I and laid claim to Mosul. The British didn’t have the military forces necessary to repel any Turkish attack if Ataturk wanted to take Mosul. Finally, London was hoping to bring the Americans into the Middle East to help share the burden of controlling all these new territories. While President Wilson had interest in an American Mandate in Armenia, he had a stroke and Congress maintained its isolationist stance where it did not want any colonial holdings in the area. It looked like the British were facing imperial over reach. With the Iraqis having risen up, with Ataturk sitting on the border, and the Americans unwilling to help the British had to adapt and adjust.

In March 1921 newly appointed Colonial Secretary Winston Churchill held a conference in Cairo to decide what to do with Iraq and the rest of the Middle East. It was decided that an Arab government would be created in Iraq under Faisal son of the Sharif of Mecca who the British had backed in the Arab Revolt against the Ottomans during the war. That would allow the British to withdraw most of its army from Iraq to save money. The Royal Air Force would take over the job of securing the country until an indigenous army could be created. An Anglo-Iraq treaty would be signed to maintain influence over Iraq. To make sure the Iraqis were compliant the British would threaten to withdraw, which would lead the new state to collapse. This was simply following through with many of Britain’s imperial policies. It had used local leaders across Asia for example to run areas for them. These rulers would also be largely responsible for their own finances so London wouldn’t have to foot the bill. These governments would continue to be under British hegemony to remain in power. Things again did not go perfectly as planned. Feisal for example, came to Iraq knowing full well he was receiving his position thanks to the British, but did not want to be seen as a puppet. That led to a constant back and forth between Baghdad and London especially over the Anglo-Iraqi treaties, which greatly angered Churchill.

Stivers didn’t just deal with the British and Iraqis however but also the Americans who were interested in Iraq. During the war President Wilson had declared his 14 Points and talked about self-determination. That led many in the Middle East to believe that the U.S. would back their hopes for their own countries after the fall of the Ottomans. Wilson and the American establishment in general did not believe that the people of the region were civilized and therefore ready for self-government. In practice, that meant the U.S. backed the League of Nations’ mandate system, which would allow England and France to take over the ex-Ottoman provinces. At the same time, the American policy of isolationism is widely misunderstood. The U.S. turned down taking its own slice of Asia after the war, but demanded an open door. That meant it wanted the British to rule Iraq, impose order, and create a stable business environment and shoulder all the costs that implied, but demanded that American companies have access to the new mandate. It was especially interested in the oil potential of Iraq. That caused huge resentment in London. The U.S. had not fought in the Middle East, but demanded an equal share of the spoils. Stivers believed the Wilson administration missed a huge opportunity during this period. The Iraqis went to the Americans asking for independent oil contracts to lessen the dependence upon the British but were turned down. Washington could have taken advantage of this situation to back the Iraqi nationalists, win new friends, gain huge business concessions because they were not a European power, but instead supported London. That’s because the isolationist policy was dominant, and the Americans did not want to take on any of the responsibilities of backing an Iraqi government. It would rather have London do that because its main concern at the time was economic expansion across the world.

The final player was Turkey, which had to be convinced to give up its claims to Mosul. There were many Turks in the province, along with oil deposits. The Turks had rejected treaties that carved up the Ottoman empire and gave it to England and France. It was also hoping to get the support of the Americans, but Washington stood firmly behind the Brits. The 1932 Lausanne conference was meant to finally resolve these issues and lead to a peace treaty. The British played on the fact that the new Turkish government wanted to be accepted by the international community and gain membership in the League of Nations. That allowed London to get the League to set up a commission to determine the future of Mosul and where the new Turkish-Iraqi border would be drawn instead of having it bargained at the meeting. The League ended up giving Mosul to Iraq, which greatly angered Ataturk, but he eventually gave in. In return, England agreed to pay Turkey 10% of Iraqi oil royalties for 25 years. England went from a position of weakness to coming out the winner. If Ataturk had decided to seize Mosul there was little London could do because it hardly had any forces left in Iraq and the Iraqi army was still a work in progress. It turned out Turkey wanted to be friends with England especially after Revolutionary Russia began making claims on Turkish territory. Ataturk had also fought a series of battles with the Greeks, and didn’t want any more conflicts. It also got a sizeable monetary compensation for giving up on Mosul. London also benefited from the firm support of the U.S. Again, the Americans wanted the British to rule Iraq to provide the environment in which its companies could operate in, and therefore was an ardent supporter.

Supremacy And Oil is very good at explaining the positions of each country. The British almost bit off more than it could chew after World War I when it decided to keep all of Iraq. It was able to adapt its imperialist policy, secure its rights to the new country, while staving off the claims by the Turks to Mosul. Where London failed was getting the U.S. to become a partner in the Middle East. The British had its army strong across the world and was heavily in debt, and wanted Washington to help. Instead, the U.S. would not go beyond diplomatic support. It wanted English rule in places like Iraq to set up a friendly business environment, but wanted none of the responsibilities of running any territory. This was what Wilson’s self-determination, American isolationism and the open door really meant. That is a very important observation because many American writers and historians write as if Wilson really believed that the Middle East could have self-government, when that was not true. He looked down upon the indigenous people, and believed they should be under British and French rule via mandates until they could become civilized. Finally, Stivers shows that the creation of Iraq wasn’t due to Sykes-Picot. Just the Iraq-Turkish border was not determined until 1932, fourteen years after the end of the Great War. Iraq was created through a long process of negotiations not only between great powers like England and America, but Turkey and the Iraqis themselves.