Review Iraq From War To A New Authoritarianism 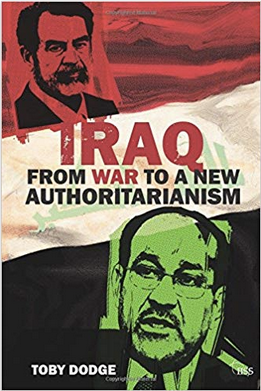 Professor Toby Dodge wrote Iraq From War To A New Authoritarianism with the goal of evaluating the Bush administration’s war aims after the U.S. withdrew its armed forces at the end of 2011. The White House said it wanted a stable and democratic Iraq that would not be a threat to itself or its neighbors. Dodge believed the U.S. fell far short of accomplishing that. Instead what it left behind was a weak state that had lost its monopoly on force and allowed various groups, including some connected to the government to use violence at will, and that was vulnerable to interference from its neighbors. Iraq while holding elections was governed by an elite bargain between exile and opposition parties that largely excluded Sunnis, and was giving way to an authoritarian prime minister in Nouri al-Maliki. That last element, which is only a fraction of the book, was what actually made Dodge’s analysis of Iraq standout because he was one of the first westerners to criticize Maliki and his concentration of power. Not even Dodge however could predict how much of an impact Maliki would have upon the future of Iraq.


Dodge goes through each issue starting with the spread of violence in Iraq after 2003. He believes that actually began in the 1990s when sanctions broke down society, there was a proliferation of weapons, and the standards against using violence dissipated. Then after the U.S. took over it failed to impose order that opened the door to the insurgency and political violence that metastasize into the civil war. The Americans made the situation worse by trying to push the new Iraqi security forces (ISF) into the forefront before they were ready. The U.S. changed tactics in 2007 with the Surge, but part of it was based upon ad hoc alliances with Sunnis such as the Anbar Awakening which had no chance of being sustainable, and were eventually dismantled by the Maliki government. Finally, Iraq’s ruling parties wanted to impose a new political system that largely disenfranchised Sunnis and were willing to use force to accomplish it via militias and the ISF. Stability would require those groups that used violence to either be defeated or convinced to give up the gun. That did not happen. When the civil conflict ended it greatly reducing the number of casualties, but the insurgency was still around in 2011 and active throughout central Iraq. Also none of the political parties gave up their militias which all took part in the fighting. Today there are even more independent armed groups, many of which were given official sanction under the Hashd al-Shaabi, and the Islamic State, while down is not defeated.

The United States also failed to create a democratic system that would ensure stability. Iraqi opposition parties such as the Kurds and exile groups like Dawa and the Islamic Supreme Council of Iraq created an exclusive bargain to divide up the government and largely shut out Sunnis. The U.S. was complicit in this by institutionalizing ethnosectarian quotas starting with the Iraqi Governing Council created in 2003, which were then continued when Iraq became sovereign again in 2005. The Sunnis responded with a boycott of the first elections that year which backfired. The constitution was then drafted by those same elites while only giving lip service to Sunni participation. This all contributed to the insurgency, and the ensuing civil war was seen as a way to impose this new system by force. Finally, when Iraqiya emerged in the 2010 elections as the victor that challenged ethnosectarianism, it was outmaneuvered by the other parties that wanted to maintain the status quo. This system still exists to this day, and its inability to fully integrate all elements of Iraqi society was shown by the rise of the Islamic State. That led the Shiite and Kurdish parties to once again impose a victor’s peace upon Sunnis with forced displacements, destruction of towns and group punishments.

The Bush administration wanted to remove the threat Saddam Hussein posed to the region. What it left behind was a weak state that couldn’t control its borders, which opened it up to constant interventions by its neighbors. Syria supported the insurgency and hosted the exiled Baath leadership, Iran pushed its allies into the new Iraqi government and supported militias, Turkey backed the Kurds to counter the growing power of Prime Minister Maliki. While Iraq now has better relations with its neighbors it still has porous borders and suffers from outside interference.

The last issue Dodge tackles was the growing authoritarianism of Premier Nouri al-Maliki. The prime minister used his Office of the Commander and Chief, regional operation commands, and direct orders to officers to try to take control of the armed forces. He deployed those forces to challenge the Kurds in the disputed territories rallying Arab Iraqis behind him. He also used them against his Sunni opponents. When Diyala, Salahaddin and Anbar pushed to become autonomous regions, something guaranteed in the constitution he used force to crush them. He went after Vice President Tariq al-Hashemi accusing him of political violence and forcing him into exile. He got the Supreme Court to rule that all the independent commissions were under the cabinet rather than the parliament and then got rid of many of the directors of those offices. His power grab became so dangerous that other elites attempted a no confidence vote against him, which failed. Dodge was one of the first people to warn about Maliki’s attempt to become an autocrat. Western governments saw Maliki as an important ally, and necessary to pass deals such as the Status of Forces Agreement that was supposed to solidify the U.S.-Iraq relationship into the future. Dodge noted that Maliki was attempting to not only undermine Iraq’s fledgling democracy, but overturn the elite bargain as well putting his Dawa party and himself above all others. This would have long lasting effects past the publications of Dodge’s book. First, it undid the growing move towards Iraqi nationalism and Sunni political participation that began after the civil war ended. Maliki’s continued persecution of Sunni figures would lead to protests across central Iraq, and his crackdown on them facilitated the return of the insurgency and eventually the Islamic State’s takeover of Mosul in 2014.

Dodge’s final assessment is that the U.S. failed in Iraq on all counts. It didn’t create a stable Iraq as the following 15 years of violence would show, and the causes of that instability still exist. That rests in the elite bargain that shapes the government. While Iraq has regular elections the ethnosectarian quota system makes it akin to Lebanon where specific groups will always have certain positions and remain on top. Iraq also continues to be a weak state in the region vis a vis its neighbors who continue to interfere in its internal affairs. Finally, Dodge’s warnings about Maliki foreshadowed the future perhaps even more than he imagined. Maliki undermined growing Sunni participation in the government and a move away from sectarianism in the 2010 election, and his attacks upon Sunni elites would give way to the return of the insurgency and the Islamic State. Iraq From War To A New Authoritarianism is a quick read of the period from 2003-2011 with great insight into what came afterward.