Review The Great Betrayal, How America Abandoned The Kurds And Lost The Middle East 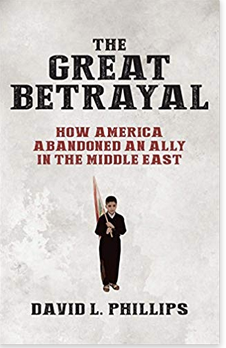 The Great Betrayal, How America Abandoned The Kurds And Lost The Middle East reads like it had been in the works by author David Phillips of Columbia’s Program on Peace Building and Rights, but then got rushed into publication because of current events. It starts off as a short history about the Kurdish drive for independence since World War I and how the west had repeatedly stymied their attempts. The second half of the book is about modern Iraqi politics, Syria and the Kurds and that’s where the story goes off the rails. Phillips has a poor understanding of present day Iraq, and by the end of the book he has chapters that only marginally deal with the Kurds and are more about the war in Syria, and the failures of the Obama and Trump administrations to deal with that conflict. The roots of Phillips’ problems is that he forgets about his original thesis about the Kurds being abandoned to focus upon how Obama and Trump lost the Middle East.


Half of Phillips thesis is that the Kurds have constantly been let down by the west in their attempt to build their own state. This started in the aftermath of World War I when the Treaty of Sevres was signed in 1920 that called for a Kurdish nation. Mustafa Kemal Ataturk’s success however, led the British to give up on that idea and decided to incorporate two Ottoman provinces with large Kurdish populations, Mosul and Anatolia into Iraq and Turkey respectively. Many Kurds today blame that on the Sykes-Picot Agreement between England and France that first talked about carving up the Ottoman empire in the Middle East, but it was actually subsequent treaties that were responsible. Phillips also continuously references the artificiality of the new nations created in the region after the war as a problem, but if the Kurds got their own state it would have been just as made up and only have included Kurds in present day Iraq and Turkey and not those in Syria and Iran.

Next Phillips turns to the American role with the Kurdish revolts in the 1970s and 1991 against Iraq. Mullah Mustafa Barzani was the pre-eminent Kurdish leader in modern Iraqi history. He led several revolts against Iraq, with the last being in the 1970s. The Shah of Iran was offering support to pressure Baghdad over the Iran-Iraq border. Barzani this time, demanded that the Americans step in as a guarantor that Tehran would not abandon them in case the Shah had a change of heart. The Nixon administration agreed and began funneling military aid to the Kurds via Iran. Just as feared the Shah made an agreement with Iraq and ended support for Barzani, and so did the United States, and the rebellion was crushed. Phillips could have put more emphasis on how important the U.S. backing was for Barzani to continue his fight to prove his thesis. Next there was the 1991 uprising after the Gulf War. President Bush encouraged the Iraqis to overthrow Saddam Hussein, but then refused to give them any help when they rose up. The Kurds were able to seize several cities in the north including Kirkuk, but eventually the Iraqi military crushed the Kurds sending thousands of refugees into Turkey and Iran. It was the uproar over that humanitarian crisis that led the U.S. to deploy troops to Kurdistan and set up a no fly zone that allowed for the creation of the Kurdistan Regional Government (KRG). Ironically, the failure of the White House in the 1991 rebellion actually ended up giving the Kurds an autonomous region.

Phillips argues that the 2017 independence referendum in the KRG and its aftermath was the latest betrayal by the U.S. He notes that the U.S., Iran, Turkey and the Iraqi government all opposed the vote, but Western intellectuals were encouraging it to go forward. The referendum was supposed to be the start of a negotiation process with Baghdad for eventual independence, yet the KRG made no plans for what would happened after the balloting. The U.S. tried to offer the Kurds a deal over major issues like Kirkuk, but the KRG said no. When the referendum occurred Baghdad declared it illegal, and moved troops to take back the disputed areas, which the Kurds had occupied during the war against the Islamic State. The referendum was an act of hubris by President Barzani with no plans for its aftermath and the Kurds paid the consequences. The U.S. has also stood for a unified Iraqi state since the 1990s. Despite that Phillips believes the U.S. should have backed the referendum and intervened to stop Baghdad from taking military action all for an ill conceived vote.

The Great Betrayal does badly with other modern events as well. For example, Phillips takes a conventional U.S. view popular in Washington today that Iraq is controlled by Iran. He claims that Ayatollah Ali al-Sistani wants an Iranian type theocracy, and that Najaf is controlled by Tehran, neither of which is true. He believes that Iran was the main factor behind the Iraqi government taking back the disputed territories after the 2017 independence referendum. While Tehran was definitely involved Prime Minister Haidar Abadi had his own reasons such as asserting the central authorities’ control over the country after what the premier considered an illegal vote. On the war against the Islamic State he also runs into problems. He writes that the U.S. provided air strikes to stop IS from advancing on Kurdistan in August 2014 but then tries to say that only later did Washington provide military aid, when that all occurred around the same time. The last chapters are even worse. He starts on the Syrian war and how Iran, Russia and Turkey have become major players instead of the United States. These sections talk about the Kurds less and less and they almost disappear from the writing by the end as Philips becomes more concerned about what he sees wrong with Obama and Trump’s foreign policy. This is why the book seems like it was hastily published to comment upon current events.

Phillips dual plot doomed his book. When he stuck to Kurdish history he did fine, especially since his examples easily support his argument that the west and the U.S. has consistently turned its back on the Kurds. The second part reads like a rushed job and eventually forgets about the Kurds to argue about the problems with U.S. policy in the Middle East. Phillips laments the loss of America’s hegemony over the region during the Obama and Trump administrations, which has allowed Russia, Iran and Turkey to now dictate events. He tries to tie this into the U.S. not supporting the Kurdish independence referendum and the Syrian Kurds, but by the end he’s talking about those other countries instead of his original subject. His lack of knowledge about current Iraq only adds to his problems in this wildly inconsistent book.