At the start of April 2019 the Islamic State announced a new campaign to avenge its loss of territory in Syria. That resulted in a huge jump in attacks during the second week of the month. After that however, incidents went back down to their previous level. Is more to come or has the offensive been derailed by the Iraqi forces that captured an insurgent headquarters and documents detailing its plans?

There were a total of 99 incidents reported in the press. Two of those were old bodies being found leaving 97 actual attacks during the month. That was up from the 61 recorded in March, but below the 117 in February and 114 in January. The figures went up in April because of the 41 incidents in the 2nd week of the month. The other weeks attacks were in the teens. Diyala with 30 led the country. The Iraqi forces raided an IS base in that province, and the Counter Terror Service claimed they disrupted the new campaign the Islamic State announced. The low weekly figures afterward may prove that true. Then again, IS usually plans offensives to last for months from the spring into the summer so it’s too early to tell. 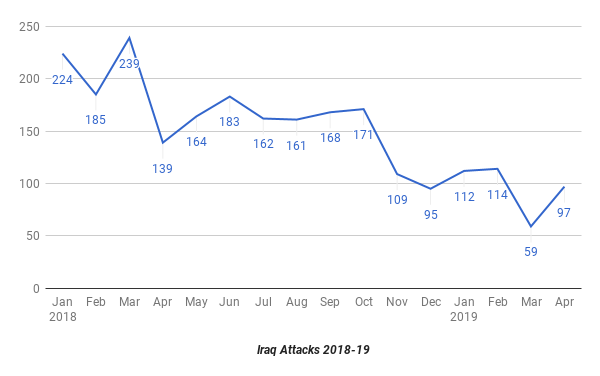 There were 105 deaths and 100 wounded during the month. 36 bodies were found in Ninewa leaving 69 violent deaths during the week. 2 from the Kurdish Anti-Terror Forces, 8 Hashd al-Shaabi, 15 Iraqi Security Forces (ISF), and 80 civilians were killed, and 1 Kurd Anti-Terror forces, 18 Hashd, 34 civilians, and 47 ISF were injured. Diyala with 45 casualties had the most during the week. Ninewa’s 59 included the 36 corpses discovered.

Violence in Anbar has continuously fluctuated. There were 16 incidents in January, 27 in February, all the way down to 5 in March, and then 16 in April. The Islamic State has been moving forces and back forth along the border with Syria, and most of the violence has taken place in that western section of the province. For instance, there was a small car bomb targeting people collecting truffles in Rutba. Still, it remains a secondary front for the group. 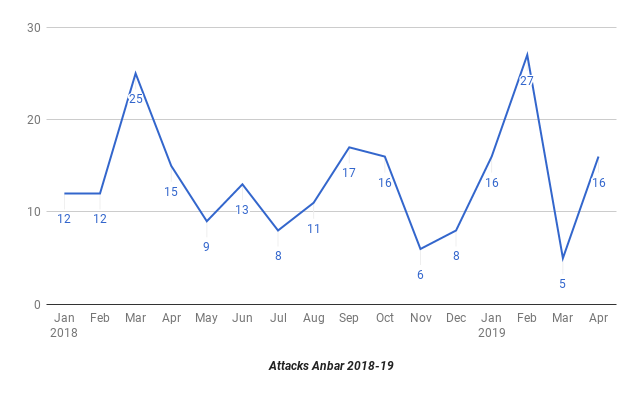 Baghdad is largely a forgotten province to the Islamic State. Since the start of the year there have been several weeks in a row with no activity. Then there were five straight weeks of very small and low level attacks from the end of March into early April. The end of the last month however, there was again no IS operations. In total, there were 10 incidents in April, versus 4 in March, 7 in February and 12 in January. All the attacks happen in the north, south, and west, usually in the outer villages of the governorate. If violence suddenly surged in the capital that would be a sure sign that the Islamic State had reached a new point in its rebuilding. For now however, incidents will likely remain sporadic as the group is focused upon the areas to the north and east. 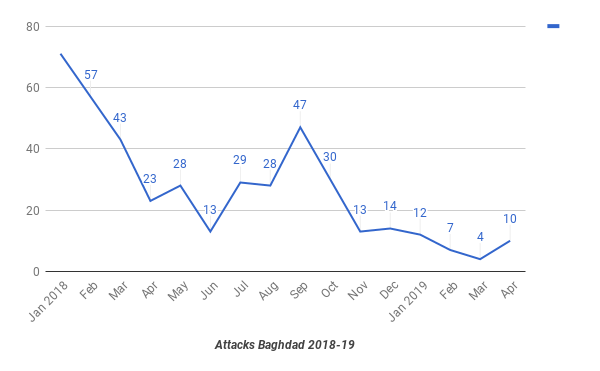 Diyala remains the core area for IS. The group never seized any territory there in 2014 so it immediately reverted back to an insurgency, giving it more time to work there. In April there were 30 attacks, up from 17 in March, 26 in February, and equal to the 32 seen in January. The militants have access to all of the rural areas in the province. It has been concentrating on the Khanaqin district in the northeast, which was one of the disputed territories taken back by the central government after the 2017 Kurdish independence referendum. Baghdad has not had the troops to secure it however and the insurgents have taken advantage of that. There are constant reports of people fleeing towns, IS extorting money from people, and kidnappings. The environment in Diyala is hospitable to IS’s rebuilding with the Hamrin Mountains being a long time base, and the groves in the west. During April there was one attack upon a mukhtar, one town was assaulted, there were two gun battles with the security forces and 4 checkpoints were attacked. 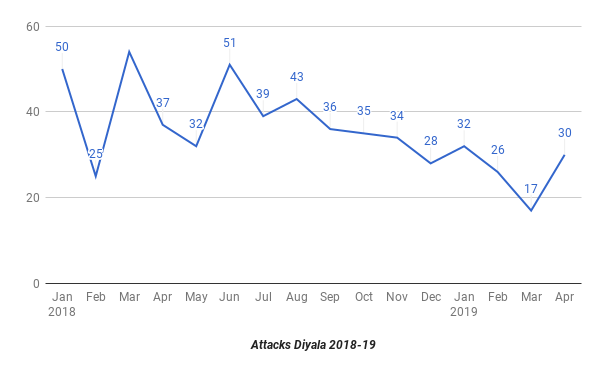 Attacks have gone down in Kirkuk since the start of the year. There were 28 in January, 17 in February, 15 in March, and 13 in April. IS is active in all the districts of the province, and has access to Kirkuk city. During the month it set up three ambushes for the security forces, a new tactic that had not been seen for a while. 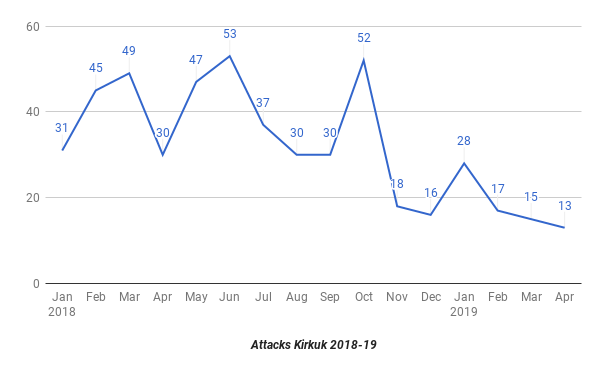 Ninewa is another province where incidents have gone up and down. There were 9 in January, up to 20 in February, down to 11 in March, and then back up to 19 in April. The insurgents have been carrying out attacks in the west and south. In April there was one gun battle, a mukhtar was attacked along with two towns, and there were two kidnappings. Like Diyala, there are increasing stories of people fleeing towns due to IS activity, especially in the west. Like Anbar, IS has moved its forces from Syria into Ninewa as well. 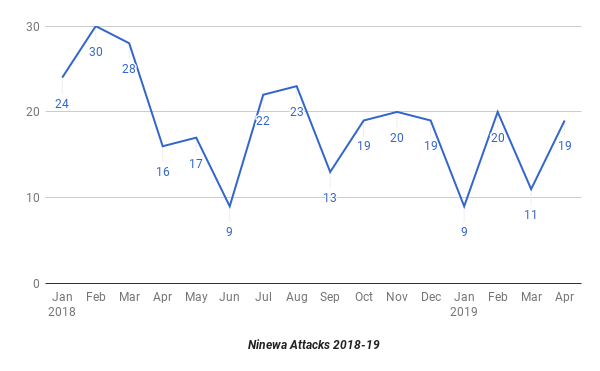 Incidents have fallen off in Salahaddin recently. There were 14 in January, 18 in February, and then 8 in March and April each. One of those was an attack upon an ISF convoy and then an assault upon the response forces that arrived at the scene, again something not seen in a while. The province includes the Hamrin Mountains that runs into neighboring Diyala, which is an important IS base. For now it looks like IS is concentrating upon its neighbor rather than Salahaddin. 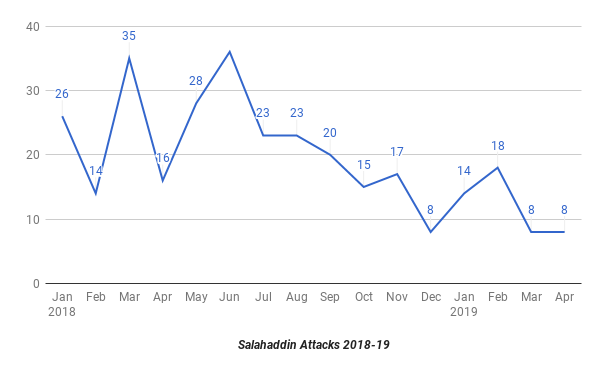