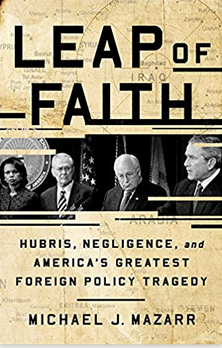 RAND’s Michael Mazarr wanted to bring together all the research, reports and memoirs on the decision to invade Iraq in 2003 into one book and analyze what led to this momentous decision. As he wrote, it was a completely unjustified war. Iraq possessed no weapons of mass destruction, and had no connections to Al Qaeda. This is not hindsight, because if the government had gone closely through the intelligence it could have ascertained this. Not only that, but the United States failed to achieve its goal of spreading democracy across the Middle East and deterring future terrorism and jihadism. The overall lesson of Iraq was that the United States put itself into a quagmire and exhausted itself in the process. In the end, Mazarr believes this was an example of criminal negligence because the Bush administration never had a debate about the rational for war, never went through the information on Iraq or consider the risks and consequences. This was the strong point of Leap of Faith. Where Mazarr fell short was his overall thesis for why America chose war. If someone asked Mazarr why Iraq? He would ultimately say because the U.S. thought it could do good. He argued politicians believed the United States had a special mission in the world to fix its problems and the Bush White House made a value judgement about attacking Iraq rather than an analytical one. This explanation would make no one happy.


The major problem with the Iraq invasion was that there was never any discussion about it nor even a specific date when war was decided. When the Bush administration first came into office it discussed Iraq, but made no policy decision. Then 9/11 happened and Bush said he would launch a broad-based war on terror but that eventually became focused solely upon Iraq. The U.S. never analyzed any of its assumptions for this choice or even seriously talked about it. For example, it never made a breakdown of the terrorist threat it faced or the countries that were supporting it. Pakistan and Iran had more connections to terrorists than Iraq, but instead there was a quick write up in a Pentagon office that argued all terrorists were connected to each other with links to states with Iraq being the paramount one. The administration didn’t think about how going after Al Qaeda might have deterred other terrorists and sent the message that it was not intimidated. There was no thought about what a broad-based war on terror would mean. There was never any debate about why Iraq should become the focus of the entire effort. Instead in the days following September 11 President Bush decided that Iraq would be the next target after Afghanistan. As the months passed this became a foregone conclusion with no meetings where Bush and his cabinet made the fateful decision. The wheels of government were set in September and moved ahead with the belief that was what the White House wanted. This was Mazarr’s first example of negligence. Deciding on war is one of the most important and consequential ones any government can make, and the administration didn’t even talk about it. Instead, it became an assumption that the president was going to move on Iraq, and everyone had to get in line.

The fault of omission would continue with the war planning. In September 2001 Bush told Secretary of Defense Rumsfeld to look into the existing strategies for Iraq, and then in November 2001 the order was given to Central Command and General Tommy Franks to begin revising it. By December 2001 General Franks gave Rumsfeld the first briefing on the invasion. The Defense Secretary would then interfere in the planning trying to whittle down the number of troops necessary because he thought Iraq could be done quick and fast using technology, and bolstered by the recent example of the Afghan invasion. The planning then moved on both formal and informal tracks. The latter included ordering plans for the invasion without telling the rest of the government, reaching out to the Iraqi National Congress for intelligence on Iraq, and having the Pentagon set up its own intelligence unit to come up with reports that contradicted the official findings that Iraq and Al Qaeda were not connected. Officially, the government launched a propaganda campaign in 2002 to convince the public that Iraq was a threat due to its WMD and nuclear programs and alleged ties to Al Qaeda. It then went to the United Nations to ask for a new weapons inspection regime to give a legal justification for the war because it was believed that Saddam would never come clean about his programs and the U.S. could then invade. Again, because the decision to go to war was flawed the planning afterward was problematic as well and there was no serious discussion. For instance, U.S. intelligence told Bush from the day of 9/11 on that there was no Iraq-Al Qaeda connection but the president and others continued to believe it. On the other hand, the CIA and others did think that Iraq had WMD, but this was based upon assumption and spotty intelligence. When the reports were given a thorough presentation such as in December 2002 when the CIA gave Bush everything it had on the topic, even the president was unconvinced. Agency Director George Tenet had assured him that it was a “slam dunk.” Rumsfeld would also not listen to anyone that criticized his idea of a small invasion force, and publicly attacked those that did. This all followed Bush’s lead. The government top to bottom believed that he wanted an invasion so they were not going to get in the way. In fact, many officials told Mazarr that the president created an environment where questions and criticism were not welcomed. Again, Bush’s leadership style meant that his administration was going to war with poor planning and no discussion of its core beliefs.

The third problem emerged with the postwar vision for Iraq. Here the administration had two minds. One the one hand, Defense Secretary Rumsfeld and General Franks wanted to invade and then get out as quickly as possible. Rumsfeld did not believe in nation building, and Franks had no interest outside of the war. Vice President Dick Cheney and others also believed that Iraq was a modern middle class country that simply needed Saddam to be removed and it would thrive. They also assumed that Iraqis would welcome the Americans as liberators meaning there would be no real problems after Saddam was removed. The dilemma was Bush wanted to change the Middle East by creating a democracy in Iraq, which would take a long U.S. occupation. How could America create a new political system in a foreign country if it was going to leave as soon as it could? Again, this dichotomy was never resolved, because it was not discussed. Even the Pentagon would issue memos talking about how a democracy would take time, but wouldn’t explain how that was to be achieved with a withdrawal being the main objective after the invasion. This situation was made more difficult by the fact that there was never any unified postwar planning. Instead, different agencies started their work independently of each other sometimes on their own because they saw war coming and thought they had to do something. Many of these offices and committees had no idea what was happening with the others, would eventually be shut down and then replaced with another that would start from scratch. This dysfunction would continue after the war as well when the final group the Office for Reconstruction and Humanitarian Assistance was created in January 2003 just three months before the invasion with no real budget or staff. Then as soon as it arrived in Iraq in March, the U.S. decided to replace it with the Coalition Provisional Authority, which made a new set of assumptions and orders that had nothing to do with what came before it. Because there was never any official decision by the president to go to war the government was basically left to its own devices to come up with postwar ideas for Iraq. It was never organized nor coordinated and it wouldn’t have mattered because that fragmentation continued after the invasion. Mazarr doesn't mention it, but the cause of this dilemma was again Bush’s style. He delegated decision making to his cabinet and believed that they would make the right decisions. Because he was not hands, he never got any sense that his agencies were not working together in a unified effort.

Mazarr’s strength is documenting all of the times when the Bush administration moved forward with war without actually discussing or analyzing it. He goes through meeting after meeting, document after document that showed how the government was working different tracks with no leadership because there was never any serious debate or even a day when the White House met and hashed out its ideas for war. Its arguments were thin, yet conviction held the day as they were presented to the public. Where the author falls short is in his overall explanation. It’s America’s world view that he ultimately blames. The United States believes that it is the world’s policeman and can fix international problems. 9/11 happened and the Bush government therefore, thought it could solve all terrorism with a single blow. This is a completely unsatisfying thesis for the Iraq war. Saddam had been a major issue since the 1990s for two administrations and was the first target for many when the terrorists struck New York and Washington and Mazarr said that was because the U.S. wanted to do good? Hubris would have been a far better argument and was shown again and again in Mazarr’s own writing. The author wants to look at things in the big picture, but goes so far back he gives a completely innocuous explanation. His other argument that the White House made value judgements rather than analytical ones in its decision does much better. The government believed in its arguments from the start, and shaped the policy around it rather than being presented facts and going from there. Still, talking about moralism as the root cause of Iraq again is not fulfilling. In the end then, Leap of Faith should be read for its in depth research into the moves of the Bush White House and how it neglected its duties to make a justifiable decision to go to war rather than the writer’s overall thesis for why it happened. That still makes this a good book, it’s just its overall view is flawed. Thankfully people can read around that.