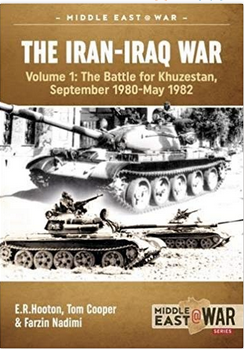 The Iran-Iraq War, Volume 1: The Battle for Khuzestan, September 1980-May 1982 was the first of a four part series by Helion on the Iran-Iraq War. Each one was relatively short, approximately 70 pages, yet packed full of information and contained a great selection of pictures to boot. For whatever reason, there is a shortage of books on the war in the west. Helion’s series attempted to solve that problem. The only real problem with Volume 1 was the constant typos from beginning to end.


Volume I covers four main topics, the first being the run up to Iraq’s invasion of Iran in 1980. The main point of contention was the Shatt al-Arab that leads to the Persian Gulf. In the 1970s Iran began backing the Kurds against the Iraqi government to force Baghdad to come to a compromise over the waterway. That led to the 1975 Algiers Agreement which gave Tehran new rights. Saddam Hussein when he officially took power in 1979 wanted to reverse that deal. He also believed that Iran was weak due to its revolution, and he wanted to make Iraq the dominant Arab country. All together that led to his decision to start the war. Many believed that this was a rash decision, but the authors claim that Saddam planned this out. His idea was to seize the southern Iranian province of Khuzistan that had a large Arab population, oil fields, and was easily accessible from Iraq. He believed that would force Iran to renegotiate the Algiers Treaty, and start revolts in the rest of the country eventually overthrowing the government. Saddam believed that the time was right to attack Iran and not only reverse the humiliation of giving into the Algiers Agreement, but hopefully get rid of Ayatollah Khomeini as well. Whether Saddam thought through his invasion or not was made moot by the fact that he only gave his military two months to prepare and they only came up with the most rudimentary plan. Iraq’s invasion also had the opposite effect, solidifying the power of the clerics in Tehran. This would all cost Iraq dearly.

The start of the Iran-Iraq War in September 1980 exposed the problems with both armies. First, the Iranian and Iraqi militaries were for internal defense. Iraq for example had spent years fighting its Kurdish population. That had derailed its training in conventional warfare. Both countries had coup proofed its armed forces by constantly purging its military and placing loyalists rather than competent officers into command positions. In 1979 for instance, Saddam got rid of all his divisional generals. The clerics in Iran took similar actions after the revolution because they believed the military was pro-royalist. The Iraqis over relied upon artillery and tanks, had a severe shortage of infantry, and made little use of combining its forces in operations. Saddam also micromanaged operations, constantly giving orders that had nothing to do with the situation at the front. Officers were also terrified of making decisions that might anger Saddam because they could lose their lives. That made the invasion force too cautious. The clerics in Iran constantly pushed for offensive operations whether the weather was right, or whether their forces were ready often leading to heavy losses. The Iranian clerics distrust of the military led them to push the Iranian Revolutionary Guard and the voluntary force the Basij into the forefront of the fighting. It not only lacked military training but equipment as well. They proved superior to the Iraqis in infiltration and small unit tactics, but lacked the planning and heavy equipment of the regular Iranian military. Tehran relied upon a large supply of high-tech, mostly western equipment, which it did not have the personnel to maintain. Most of its force of tanks and air planes became inoperable as a result, and there were constant shortages of spare parts. The Iraqis on the other hand had mostly semi or illiterate troops which couldn’t handle most repairs and maintenance of their largely Eastern Bloc arsenal. It had to rely upon foreigners like Soviets to keep up most of its equipment. Finally, Iran had superior planes, helicopters, and self-propelled, long range artillery, while Iraq had the best tank with the Soviet T-72. In the end, both forces had to learn through trial and error on the battlefield, and never really overcame their major problems. They were constantly hindered by politicians for instance. The book does a really good job laying out these major disadvantages.

The third issue covered is how the Iran-Iraq War became a boom for international arms dealers and foreign countries. The Iraqis for example bought most of their armaments from the Soviet Union. It didn’t tell Moscow about its plans however, and the Soviets were still trying to win favor with the clerics in 1980. That meant Iraq had to diversify its arms sources signing deals with countries like Yugoslavia, Brazil, South Korea and France. The Soviets eventually came back Iraq in the war, and provided weapons, advisers and technicians. Iran was facing international isolation from the west after its revolution and the seizing of the American embassy. That was a major problem since it inherited the Shah’s arsenal which was mostly American. It had allies in Syria and Libya which provided it with Soviet and Eastern Bloc equipment. Iran also signed deals with Taiwan, South Korea, and Brazil. China also supplied both sides during the war. Lasting for eight years meant everyone wanted to get in on selling weapons to the two sides during the war. The profits were too irresistible. That discussion is continued in the following volumes in the series as well, and highlights that even supposed foes like the Israelis and British ended up selling to Iran.

The majority of the book is taken up by a discussion of the military operations. The Iraqis invaded Khuzistan province in southern Iran from Basra province following six uncoordinated lines of advance. They moved too cautiously and would only go to designated points, and then dig in for the night. Their logistics quickly broke down, most Iraqi commanders were incompetent, and they had to constantly answers orders coming from Saddam. The Iranians were initially caught off guard, but recovered quickly. By January 1981, Iran launched its first major counteroffensive. It was started due to political pressure by the clerics to recapture territory and done during the rainy season when the ground was muddy leading to a complete failure. Iraq launched one more offensive of its own in early 1981 and failed marking a turning point in the war. Baghdad would make no more major attempts to seize Iranian territory until the end of the war. Iran on the other hand went from operation to operation from 1982-1983 and recaptured most of Khuzistan. Saddam quickly realized that his plan had failed. He’d not been able to seize southern Iran, there was no revolt against the clerics, and now Iran was back at the Iraqi border and threatening Basra, which would be the next phase in the conflict. The authors cover all the campaigns down to the brigade level. There are an excellent selection of photos, and good maps in the middle of each operation. This provides a blow by blow commentary on the start of the war and how everything unraveled for Iraq.

All four volumes of Helion’s Iran-Iraq War are highly recommended. They are excellent military histories, with great supporting material, and lots of details. Volume I has one major drawback. That is the lack of hyphens in between numbers. For example right at the opening it says that Iraqi casualties were around 190,0001,040,000. Iraq obviously did not suffer over 1 trillion casualties. That’s supposed to read “190,000-1,040,000” but no hyphens appear between any numbers throughout the entire volume. If you can get over that the rest of the book is very good.


I intend to buy the Iran-Iraq War series but was wondering if you get credit from Amazon as do one or two other blogs I use.
I'll check back for your reply,

Sorry I haven't done that sponsorship things with Amazon.
- Joel

Well, anyway....thanks for your quick reply.